Starting in the late 1990s, the government of Taipei began looking into how they could turn global attention to their city, the capital of the small island of Taiwan.

The initial idea was to create two 66-story office towers, which would be the tallest in Taiwan’s capital and one of the tallest in the country. The city government then raised its aspirations, targeting 88 stories, the same number as the twinned Petronas Towers in Malaysia (which, at the time, were the tallest in buildings in the world).  Then they had another idea to go even higher than the tallest buildings in the world, and make their building a perfectly round 100. In the end, they decided to go above and beyond, settling on hundred and one floors.

Erected in 2004, Taipei 101 is 1,667 feet  (508 meters) tall. It’s more than twice the height of any other building in the city. Building such a tall structure is never simple, but doing so in a place like Taipei means accounting for earthquakes and typhoons. The developers would have to  engineer the building to withstand extreme environmental conditions, and at the same time, convince tenants and visitors it was safe and comfortable to inhabit.

In theory, there are no technological restrictions on the height of a building. As long as there’s enough ground space, one could build as tall a building as one wants. It ultimately comes down to procuring permissions and financial resources.

In Taipei, securing funding for the new building was a huge endeavor, spearheaded by the Taipei city government. Once the mayor selected the developer, Harace Lin, they partnered with the private sector, and a handful of local financial institutions signed on as shareholders, including the local banks and stock exchange.

Getting other city departments on board meant factoring in things like flight patterns, which would have to be adjusted around the tower. Being able to tell civic stakeholders that the goal was “the world’s tallest building” helped sell the idea and make such workarounds happen.

Once the land was secured an the air was cleared, the city was ready to create their urban icon. For the design of the building, they turned to starchitect C.Y. Lee, who wanted a tower that was distinctive- one that couldn’t just as easily appear on a skyline in London or Sao Paolo or Mumbai. Lee envisioned a high-rise pagoda, vertically elongated and clad in green glass.

The skyscraper was divided into eight segments, a intentional lucky number choice because “eight” in Chinese sounds like the word for “wealth” (especially important for a financial building). For even more good luck, giant gold coins adorn all four sides at the base, and dragons and clouds decorate the buildings corners.  After all, Taipei 101, prone to storms and seismic activity, needed all the luck it could get. 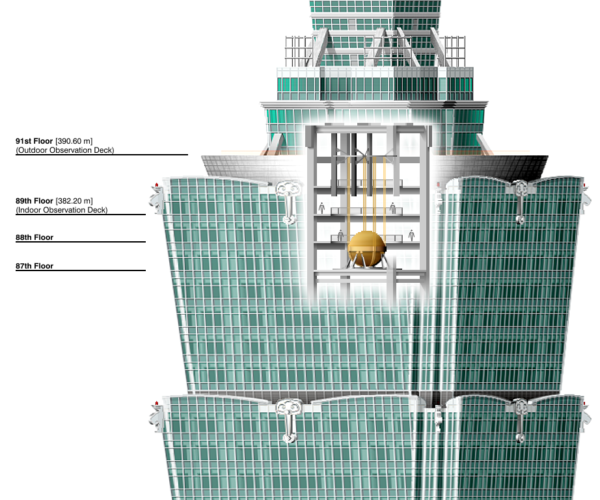 Ideally, buildings on seismically active ground should be a bit flexible, so they can roll with the earth. However, since Taipei also faces strong typhoons, the tower couldn’t be too flexible, otherwise it would sway too much and occupants would feel seasick. This is why Taipei 101 chose to employ a tuned mass damper.

A tuned mass damper is essentially a counterweight against the winds and it can take various forms. In some buildings, the TMD is a weight on rollers. In others, it is a block of concrete suspended in a pool of liquid. In Taipei 101, the TMD is a gigantic pendulum. The motion of the damper lags the building, slowing the sway of the structure.

A number of tall, thin skyscrapers have dampers of some sort, but usually they are hidden behind closed doors on locked floors. In Taipei 101, however, the enormous damper is the star attraction of the building:

The massive, 728-ton orb, made of 41 stacks of solid steel, weighs as much as 132 elephants. It is suspended by four bundles of thick cables- and all of it is painted gold.

Just seeing this feat of engineering helps occupants feel safer. Beyond making the damper visible and painting it gold- the developers went a step further and hired the Sanrio Company, the same group that had designed Hello Kitty. The company came up with Damper Babies:

The damper babies are little cartoon figures with the body of a damper, a big head and little arms and legs. They comes in black, red, yellow, silver and green, each with their own personality. The Damper Babies’ faces, with vertical lines for eyes in a circular mouth, subtly spell out “101.”

The damper babies, by the way, speak their own made-up cutesy language.

These figures decorate the hallways leading to and from the damper in Taipei 101, and they appear on all kinds of products and toys in the tower’s gift shops.

Taipei 101 lost the title of World’s Tallest Building to the Burj Khalifa in Dubai in 2010. The Burj Khalifa is over a thousand feet taller than Taipei 101, but it doesn’t have a tuned mass damper at all.  Taipei 101’s golden damper has kept international attention on the building, which has become a representative of the city of Taipei itself.

Historically, a tall building were often seen as an embodiment of corporate power, as reflected in the titles of projects in the United States like the Chrysler Building, Sears Tower and Chicago Tribune Tower. While the US once led the race for the tallest buildings, most of the contenders now are located in East Asia and the Middle East.

In new construction projects, the naming of tall buildings has become more about prestige and branding for emerging cities and countries; thus the rise of names like Shanghai Tower, Guangzhou International Finance Center, Makkah Royal Clock Tower and, of course, Taipei 101.

According to the Council on Tall Buildings and Urban Habitat, Taipei 101 is currently the 5th tallest building in the world, at least for now. At the rate tall buildings are rising, this will be outdated very, very soon.

The Council defines buildings that are over 984 feet (300 meters) as “supertall.” Right now, there are 100 supertall structures in the world, and 50 of them were built in just the last five years.

Given their proliferation, supertall buildings cannot depend on their height alone to win notoriety. This is why Taipei 101 tried to rack up all the superlatives it could, including biggest wind damper in the world, fastest elevators in the world, and tallest LEED Certified Green Building in the world.

Similarly, other skyscrapers opt to add in unique features, like giant clock towers, glass observation decks or external sky slides. These days, the focus is increasingly on offerings that educate, entertain and grab headlines, in a world moving beyond “tallest” buildings.

Want to hear where it all started? Episode 100 (above) chronicles the rise of the world’s first supertall building.