The Senate bathing facility boasted of tubs carved from single blocks of Carrara marble. Minton tiles covered the floor. In 1869, a city newspaper published a description of these luxurious bathing chambers, noting that ‘when not in use, it is always open to the inspection of visitors.’  Pictured in the above illustration is a senator surprised by two misinformed visitors.

Here are the bathtubs today, located in the basement  of the US Capitol building:

The Senate bathing facility has since become a maintenance room—a maintenance room that happens to have a marble bathtub carved from a solid block of Italian marble. Sitting on the steps to one tub is our guide, NPR Congressional Correspondent Andrea Seabrook. In the eight years she’s been reporting on Congress, Andrea has made it a point to get to know the whole Capitol building. “The members of the House Republican Caucus—and sometimes the Democrats—meet in the basement for their closed-door secret strategy sessions,” Andrea says. “And it’s a really good place to get a tip from members that you know about what’s going on.” One day, after getting the info she needed for her story, she decided to press further on into the depths of the Capitol. “I have this habit of walking into any door that’s unlocked…You start poking around, going into doors…you find the coolest things…”  she says. During one of these explorations, she found the marble bathtubs.

The bathtubs were installed around 1860 during the expansion of the Capitol. DC is known for its swampy summers, and legend has it that senators could be banished from the chamber if they were too smelly. But lawmakers—like most Americans at the time—didn’t have indoor plumbing at home. They needed a place where they could wash up. So, the architect of the Capitol ordered six marble bathtubs, each three-by-seven feet and carved by hand in Italy, to be installed in the Capitol basement—three on the House side, three on the Senate. Today, only two tubs remain on the Senate side, in a room which now stores the building’s heating and cooling equipment. But evidence of the room’s former grandeur remains. 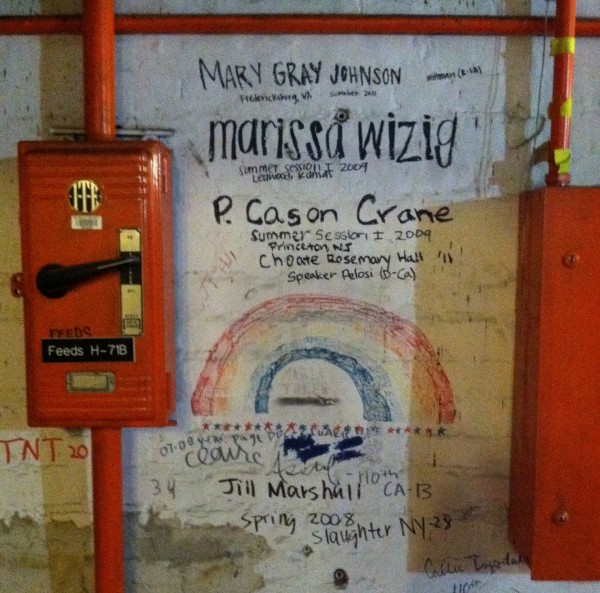 Sam says: “After exploring the basement, Andrea took me to another hidden part of the Capitol—the attic.  The attic has roof access, which means that it’s been trafficked by decades-worth of Congressional pages who are charged with changing the flags that fly over Congress.  And the pages, like most teenagers, wanted to leave their mark.”

One to One: Full-Scale Floor Plans Help Architects Walk Clients Through...

Blueprints, models and renderings are all helpful ways... [Read More]

They seem like marvels from another time, and... [Read More]