Initially known as The Great American Pyramid but often referred to by locals simply as The Pyramid, this monumental anachronism has been through a lot in its few short decades of existence. Finally built in the late 1980s, the idea of erecting pyramids in Memphis, Tennessee actually dates back to 1950s, when artist Mark Hartz envisioned three such structures along the Mississippi. Referencing the namesake of the city, the largest of these skyline-defining structures would be two-thirds the size of the Great Pyramid of Giza, located near Memphis, Egypt. 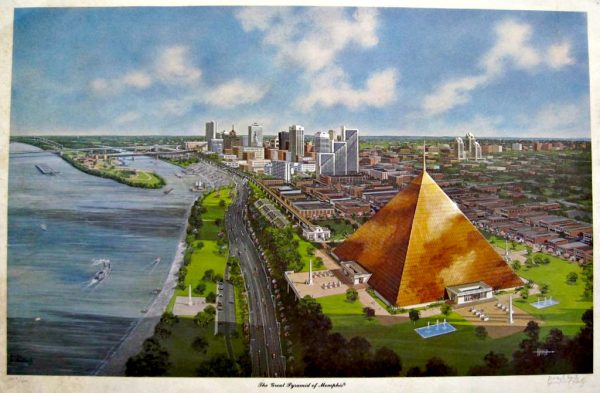 Thanks to destinations like Graceland, 1980s Memphis was well on its way to becoming a tourist hub. Hartz’s son, Jon, saw what was happening and sensed an opportunity to resurrect his father’s vision. A new, single-pyramid scheme was drawn up, which caught the attention of entrepreneur John Tigrett, whose fortune was already built in part on some wild ideas like Glub-Glub “the Drink-Up Duck” (a knick-knack of which he sold around 22,000,000 units).

Initially, Tigrett’s plan was to build out a whole interactive experience with an arena, radio station, viewing platforms and restaurants, including a Hard Rock Cafe (the chain was developed by his son Isaac). It would be “the first pyramid of consequence built in over 5,000 years.” 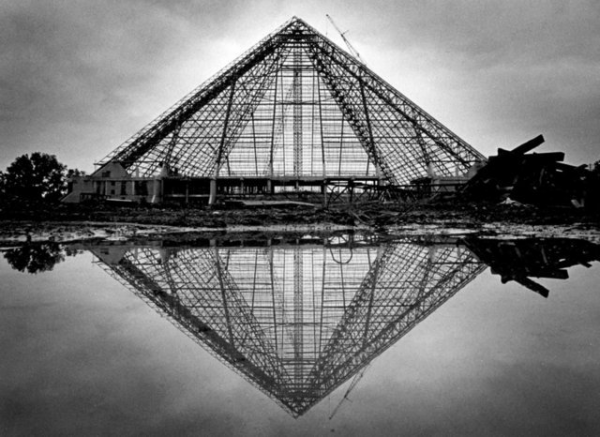 A combination of mismanagement, setbacks and other financial woes led many of the bells and whistles to get scrapped along the way. In the end, the pyramid opened as a more modest arena venue. Even the opening, though, was a fraught affair — bathrooms flooded and the concert stage had to be sandbagged to protect electronics. Still, for a time, the arena was popular, used for concerts, conventions and sporting events, at least until Memphis finally got its dream team.

When the Grizzlies moved down from Vancouver, it quickly became apparent that The Pyramid would not be a viable NBA venue for pro basketball games. Upgrading the facility to meet league standards and the team’s approval would be cost-prohibitive. Instead, a new $250,000,000 stadium had to be built. This was completed in 2004, and naturally become the city’s venue of choice for other activities, too.

A committee was formed to decide what to do with the suddenly redundant giant pyramid left behind. There were proposals to turn it into a shopping mall, an indoor theme park, an aquarium or a casino. Among other ideas, a rumor began to surface that Bass Pro Shops — a hunting, fishing and camping retailer — was interested in the building. This notion seemed implausible to many locals at the time. 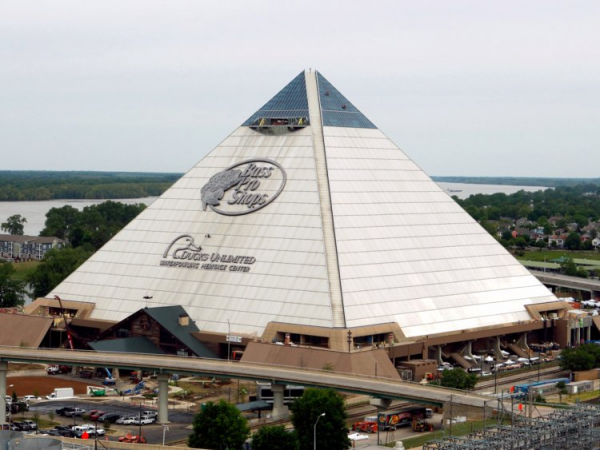 It took years of negotiation followed by years of remodeling, but sure enough: the largest Bass Pro shop in the world opened inside The Pyramid in 2015. In addition to archery and shooting ranges, bowling alleys, hotel rooms and a 600,000-gallon aquarium, the new megastore also boasted the tallest freestanding elevator in America.

Through the renovation, one of the features originally value-engineered out of the giant structure finally came into being: The Lookout, a viewing platform with indoor and outdoor observation decks, a restaurant and bar, all situated at the structure’s apex.

What started as a vision morphed into a folly that has since become an icon with occupants no one would have anticipated, a powerful if strange example of adaptive reuse. (Special thanks to B Borno).