Big-box stores promise convenience and jobs for suburbs and small towns, but have a mixed reputation with designers and citizens. Many see big boxes as icons of unsustainable sprawl, reinforcing car culture with highway-oriented access and expansive parking lots. These boxy buildings not only take up vast amounts of land but often also require infrastructure around them to be overhauled. Later, when their super-sized occupants leave: a giant empty structure is left in their wake, which can be difficult to reuse unless a similar retailer takes its place.

Some communities and architects, however, have started to turn these voids into opportunities, taking advantage of qualities unique to such megastructures. In one Texas town, a vacated Walmart has become the biggest single-story public library in the United States.

Located in McAllen, the 123,000-square-foot building in question was redesigned and retrofitted by architects from Meyer, Scherer & Rockcastle. Their approach to the project turned some of the biggest challenges of big-box reuse into opportunities. The sheer volume of the structure provided an open framework, ready to be re-purposed.

The open floor area was strategically split into various sections, including public meeting spaces and computer labs, as well as an auditorium, bookstore and cafe. On the ceiling above, the designers left structural and mechanical elements exposed, coating them in white paint. Below, bright carpets, colorful floors and modern details distinguish various occupied zones and transitional areas. New colors and materials have transformed the entry and exterior.

The award-winning building has been lauded for tackling the tricky dilemma of deserted big-box structures: “The McAllen Main Library represents an important shift in American cultural attitudes toward tolerating big box, suburban structures,” wrote the AIA National Honor Awards Jury. “The interior spaces have been dramatically transformed from a warehouse to a place with a sense of intimacy.” Walmarts across America occupy over 700,000,000 square feet of space, and this library illustrates how some of that area might be put to good use.

Inside the Box: Liabilities as Assets

The footprint of a big box store extends beyond the space occupied by the building or even the parking lot. In many cases, “roads are widened, stoplights put in …. entire bypasses might be created,” explains Julia Christensen, author of Big Box Reuse. “So all of this invested infrastructure remains after the retailer leaves the building behind.” The result is a great deal of embedded energy both in and around big boxes, which in turn also creates a strong incentive for adaptive reuse.

The question then becomes: what kinds of new programs are best suited to such huge spaces after they are vacated? What new uses will take maximum advantage, of not just the buildings, but also their parking lots and surrounding infrastructure?

After all, not every town needs or can support a library as large as the one in McAllen. Principles from that successful example can, however, be generalized to other reuse cases, since these similarly-constructed boxes share many common traits:

Of course, some of these vacated spaces will simply be occupied by replacement stores. Other reuses that can make use of the above traits, though, span a surprisingly wide spectrum. Big boxes have been turned into everything from commercial gyms, markets and offices to institutional museums, schools and churches.

In Eden Prairie, Minnesota a former grocery store is now a vast library with vaulted ceilings (pictured above), redesigned by BTR Architects. Another grocery in Princeton, New Jersey, has become a fitness and wellness center. In Fayetteville, North Carolina, rows of flea market stalls have replaced the aisles of an old Kmart. 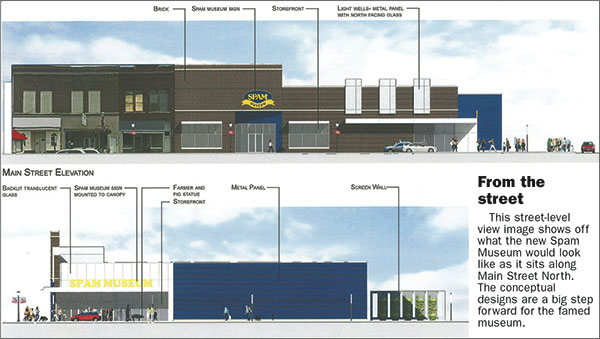 In Austin, Minnesota, another Kmart was turned into offices for Hormel, as well as a giant Spam Museum. The company has since grown, its offices now occupying the entire vacated retail space, pushing the Spam Museum to a new location downtown.

The 900-student Sugar Creek Charter Elementary School in Charlotte, North Carolina, worked both with and around extant features of the Kmart that preceded it. Many of the hallways have been organized to coincide with former shopping aisles in order to take advantage of existing lighting rows. Meanwhile, the lack of exterior windows led redesigners to introduce skylights, bringing daylight into classrooms.

Location can play a key role for retailers and community-oriented institutions alike. The 1,500-seat sanctuary (plus classrooms, offices and cafe) of the Grace Fellowship Church between Latham and Troy in New York, occupies what was once a Grand Union Grocery Store. The congregation saw the site as a strategic asset; the store was highly accessible by regional roads and highways. 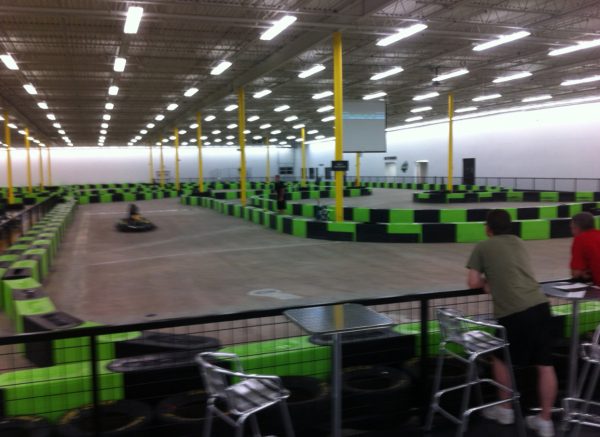 Some of these retail boxes continue to change occupancy over time, serving one or more functions either sequentially or even simultaneously. In Round Rock, Texas, half of a Walmart was converted into RPM Indoor Raceway; when the racetrack left, the structure was subdivided to house a gym, smoothie shop, hair salon and other retail occupants. In Lebanon, Missouri, an old Kmart is now part library and part Route 66 Museum and cafe, also housing other smaller stores. Such mixed-use solutions have financial advantages too, making it easier for individual tenants to afford sections of a sizable whole.

In other cases, success leads to expansion and additional conversions. The Snowy Range Academy in Laramie, Wyoming, first took over the empty space left by a Walmart, then subsequently grew to occupy adjacent retail square footage (previously used by a Dollar Tree and a Staples store). Truck loading areas alongside the complex have been turned into recess and playground spaces for students.

Lest it seem like this phenomenon is strictly limited to rural locations: an IKEA in Burbank (on the edge of Los Angeles) is currently being converted into a 765-unit apartment complex. The company has apparently outgrown their 242,000-square-foot store built in 1990 and is opening a new one nearly twice its size.

Many current big-box reuse projects are pragmatic, addressing immediate needs and reflecting current conditions on the ground. Some design concepts have been proposed, however, that go beyond present adaptations and reshape boxes more fundamentally.

In 2008, the Washington Post brought together a team of artists, architects and engineers to consider the question of big-box reuse in general. The resulting proposals are more theoretical (at least, so far) but nonetheless rooted in reality and compelling in scope. The three examples below show a range of possibilities that draw inspiration from rural, suburban and urban sources. 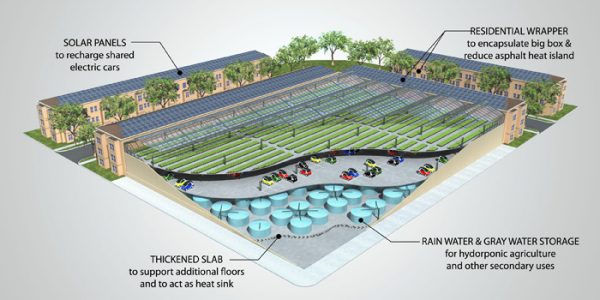 The (above) approach by Esocoff & Associates leaves the box itself relatively intact and focuses on additions: new layers are provided for parking, farming, rainwater and solar energy collection. The stacked box is then wrapped (and essentially hidden) in a layer of housing.

A solution proposed by Roger K. Lewis, author and emeritus professor of architecture at the University of Maryland, involves cutting up boxes to create denser housing inside of them. Structurally, the design approach takes advantage of the relative ease with which sections and holes can be sliced and punched out of superstore facades and roofs.

Christopher B. Leinberger and Darrel Rippeteau imagined leaving the boxes essentially alone, focusing instead on their parking lots. Superstore parking areas can be multiple times larger than the commercial spaces they service, creating an even bigger blank slate for redevelopment. In this design duo’s lot-oriented scheme (above), entire city blocks of mixed-use architecture emerge vertically from the empty asphalt. These dense new developments take on the role of replacement anchors and become walkable centers of attention and activity. Meanwhile, ground parking is replaced with vertical ramps and remaining paved spaces between the new construction and old boxes become public roadways.  Furnished with fresh potential customers living right across the street, occupied boxes can be supported or empty ones refilled … all thanks to newly-adjacent micro-communities.

Each of these solutions is currently conceptual in nature and would require more planning than simply finding replacement tenants. Still, they serve to open up the questions and issues of big-box reuse to a larger community of built environment designers and experts.

Beyond the Box: Form Reforms Function

Adaptive reuse is as old as architecture itself, with few buildings retaining their original structure, layout and functions across generations. Far more time and money is spent revamping existing structures than building new ones. Warehouses become lofts, asylums turn into schools, homes and offices shift shape with tenants and technology.

“Almost no buildings adapt well,” writes Stewart Brand in his seminal book How Buildings Learn. “They’re designed not to adapt; also budgeted and financed not to, constructed not to, administered not to, maintained not to, regulated and taxed not to. But all buildings adapt anyway … because the usages in and around them change constantly.”

Suburbia will inevitably morph over time, just as cities do, and not just the big-box stores. Indoor and strip malls, office parks and drive-through fast-food chains will also grow into new uses fit for future generations. In many ways, these various suburban typologies are particularly well-suited to adaptation: no one cares about what happens to unloved structures, making them perfect candidates for complete transformations.

“While no one likes to see businesses fail,” write Ellen Dunham-Jones and June Williamson, authors of Retrofitting Suburbia, “redevelopment of these sites to respond to new suburban demographics, rising transportation costs, and infrastructure investments provides the opportunity to transform the most automobile dependent landscapes into more sustainable, more urban places. The big development project for the next 50 years likely will be retrofitting suburbia.”

Even when they are open, we tend to... [Read More]