The expression “all roads lead to Rome” has a surprisingly literal point of origin, located near the Temple of Saturn in the ancient Roman Forum. The Milliarium Aureum (or: Golden Milestone) was erected in 20 BCE by the Emperor Caesar Augustus. All distances in the Empire (to and from Rome) were measured relative to this single monument.

The monument itself is presumed to have been a work of marble or gilded bronze, but has since been lost to history. The idea of marking a central geographic position in major cities, however, has persisted for millennia across dozens of countries around the world (below: Tokyo, Japan; Sydney, Australia; Moscow, Russia; and Madrid, Spain).

This type of spatial designation and its physical expressions are known by various names in different places, from “kilometer zero” and “point zero” to “zero stone” and “zero marker.” They can be inscribed plaques on walls or in plazas, or sculptures and obelisks.

Many have been (and some continue to be) used to measure distances within a city or across a country, usually starting in the capital. They can give drivers a zero point for setting trip odometers and facilitate mile (or kilometer) markings for national highway systems. Indeed, in many cases where one might expect a highway sign to state the distance to the edge of a city, such signs are in fact specifying the distance to one of these precisely marked positions within a city.

Carrying on this Roman tradition, the Byzantine Empire had its own zero-point monument: the Milion of Constantinople. Fragments of this edifice were rediscovered in Istanbul, Turkey in the 1960s and have been used to extrapolate renderings of the original structure.

The London Stone, dating back to the 1100s and possibly of Roman origin, may also have served a similar purpose for England’s capital. Historians still debate its original function.

In more recent centuries, London has used Charing Cross as a central point of reference. The location features a roundabout and statue that have been used as an origin point for distance measurements and have served as the city center in various other official ways.

Aside from a small plaque, though, it would be hard to know Charing Cross was London’s zero point. In many other countries, zero markers are made to stand out in more grand and explicit ways.

In Budapest, Hungary the kilometer zero stone used for country-wide measurements is big and literal. The sculpture is shaped like a giant zero, stands nearly ten feet tall and has “KM” inscribed on its pedestal.

In Havana, Cuba the National Capitol Building featured a very precious zero stone in the form of a 25 carat diamond. After it was stolen in the 1940s (despite it later resurfacing), a replica stone now sits in its place.

In Buenos Aires, Argentina a zero stone monolith stands in the Congressional Plaza. It features an image of Our Lady of Luján (honored as the “Patron Saint of the National Road Network”).

In Paris, France a point zero plaque in front of Notre-Dame Cathedral, is a popular destination for odd tourist rituals (like spinning in place, kissing or tossing a coin on the marker), in addition to being the spot from which national highways are measured across the country.

In Washington, D.C. the Zero Milestone was created in the 1920s just south of the White House in President’s Park, its architect inspired by Rome’s ancient Golden Milestone. 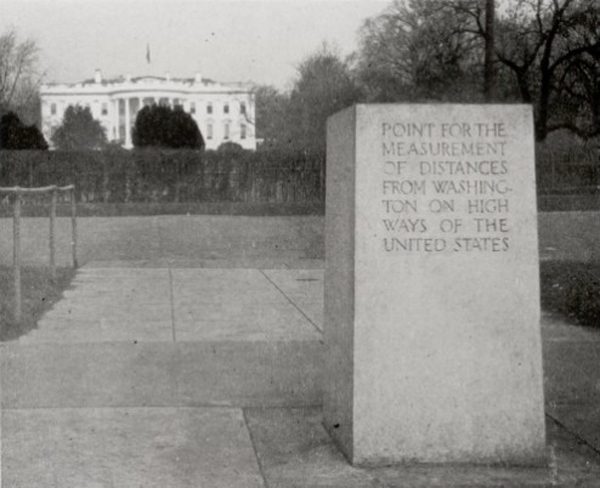 Despite its inscribed intent as the “point of measurement of distances from Washington on highways of the United States,” roads outside of the District of Columbia do not reference this monument. Indeed, most US mile marker and distance systems reset from state to state, and signs for intercity travelers follow no single national convention.

Searching for a Center

In our GPS-driven era, there is little need for physical monuments to denote central locations, but center points still retain some allure. Their mystique may explain why one Californian city recently (if somewhat inexplicably) sought to locate and mark its own geographic center. 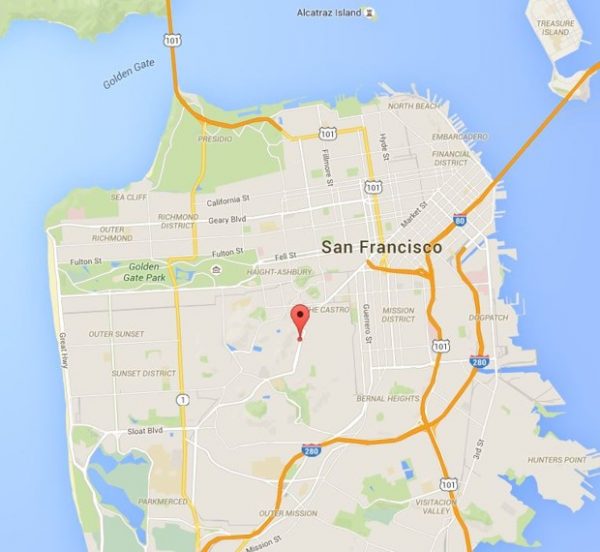 No one seems entirely clear on why this endeavor would be important in the first place, as the San Francisco Chronicle aptly illustrated in an interview with Public Works Director Mohammed Nuru:

Aside from uncertain motivations, there were a number of challenges along the way. Figuring out the center of the city involved deciding what to include. Factor in Treasure Island and the center shifts east … or count the Farallon Islands and it winds up underwater. Speaking of water, the center of land area changes as tides ebb and flow, too.

If it seems fortuitous that the point identified by the responsible surveyors fits neatly into a neighborhood sidewalk … well, that is also a bit of a stretch. The actual center, according to a high-tech gizmo and over a dozen satellites, actually sits in the bushes nearby. Nonetheless, they installed a brass disc in fresh cement and called it a day; this marker was promptly stolen within 24 hours.

There are likely a number of lessons to draw from the San Francisco center fiasco. Certainly, cities tend to fare better with their centering endeavors when they select a more sturdy type of marker. Perhaps more importantly: the process is simpler, easier and probably better when someone simply decides on (rather than trying to find) a center.