Humans form cities from concrete, metal and glass, designing structures and infrastructure primarily to serve a single bipedal species. Walking down a familiar city street, it is easy to overlook squirrels climbing in trees, weeds growing up through cracks in the concrete, and pigeons pecking along the sidewalk. Those creatures that do manage to live all around us, thriving alongside humans, are rarely celebrated for their ingenuity. In many cases, however, such synanthropes (from the Greek syn [“together with”] + anthro [“man”]) tell fascinating stories of urban fortitude. 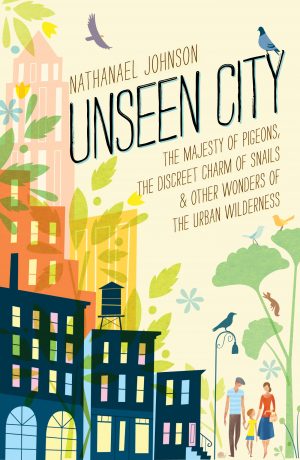 Author and amateur naturalist Nathanael Johnson began digging into some of these everyday urban species, leading him to write Unseen City: The Majesty of Pigeons, the Discreet Charm of Snails & Other Wonders of the Urban Wilderness. The book uncovers weeds that are tastier than you imagined and small mammals smarter than you suspected. The author researched various plants and animals, including that most infamous species of urban bird so many people love to hate, sometimes referred to as a “flying rat.”

Pigeons have earned quite a reputation over time for their bothersome presence in the urban landscape, but they have not always been such pariahs. For a time, the bird conjured up quite regal associations.

Historically, these were birds of the aristocracy. Researchers believe they were domesticated in the Middle East and then spread around Europe by the Romans. Their habitats were even built into the architecture of Roman houses: one common element of a traditional Tuscan Villa was an integrated lookout tower and pigeon house.

In the 1600s, pigeons were brought to Canada from Europe; from there, they spread across the United States. Governors and dignitaries would exchange them as gifts and house them in domestic pigeon roosts. As they became more common and wild, pigeons began to lose their exotic appeal and fell out of favor with the upper class.

This change in status is reflected in the evolution of common language as well: for a long time, “pigeon” and “dove” (of the same bird family) were essentially synonyms. Over time, the two diverged: “dove” was increasingly associated with positive things and “pigeon” became associated with the negative. Imagine, for instance, Pigeon Soap beauty bars, silky smooth Pigeon Chocolate, or the Holy Spirit descending from Heaven in the form of a pigeon.

A huge industry has evolved around deterring pigeons from occupying urban spaces and outdoor surfaces, producing spikes, netting and even miniature electric fences. While such strategies can work on a single building, they really just move pigeons around, pushing them to adjacent structures.

The need for this industry, of course, traces back to people, who bred them and spread them around the world, then laid out all of the food waste on which they continue to thrive. Their resulting overpopulation breeds the diseases for which pigeons are now known.

Despite these associations, pigeons are amazing (if slightly disturbing) creatures, often beloved by those scientists who study them. Take, for instance, pigeon milk. Pigeons have evolved to produce a milky substance, secreting nutrients in a small pouch (crop) inside their throats. Both the males and the females make milk, which the squabs access by sticking their beaks down their parents’ throats. This adaptation is found in very few birds and evolved along a completely separate path from the milk found in mammals.

Pigeons can also be the source of unique scientific mysteries—consider the strange case of their deformed and missing feet. A sizable percentage of feral pigeons suffer from this hard-to-explain phenomenon, and theories abound as to the cause. Some have suggested that predators are the likely culprits; others posit foot-specific infections. Researchers have ultimately traced the problem back to loose threads found in cities, which get wrapped up in a pigeon’s feet. Most birds hop over problematic twine, but pigeons shuffle, and thus pick up threads along the way. Even the most well-adapted urban creature can still find aspects of city life challenging.

Some species, like pigeons, thrive in spite of urban challenges, but some have prospered (and perhaps even survived) because of cities.

Crows, for instance, are preyed upon by great horned owls, but, in the presence of street lights, this apex predator cannot swoop down unseen and catch its prey unawares. Thanks in part to round-the-clock lighting, urban crow populations are booming.

The ginkgo biloba tree might have been on the road to extinction had it  not been for cities. In ancient times, ginkgo trees had a (still unknown) evolutionary partner, some animal species that spread its seeds. This species presumably died out, and today ginkgos are limited in nature to a small population in rural China. People, however, have taken in interest in the species, and the trees do well in cities: they can survive surrounded by concrete, in polluted air and in limited lighting. They are also famously good at dealing with abuse, such as accidental car collisions. It also turns out that humans can safely cook and eat the seeds (in limited amounts).

One of our mantras here at 99% Invisible is to “always read the plaque”—not because all plaques are fantastic (many are boring or even factually incorrect), but if you are the type who reads plaques you may also start to notice the stories behind places.

Unseen City has a parallel dictum: “always eat the weed.” A surprising number of weeds are edible, and some are even tasty. Humans tend to interact with nature via sights and sounds, but eating adds layers of texture, taste and smell to the experience. In turn, this up-close contact changes the way we perceive everyday plants in our environment.

For those not sure about eating weeds, here is a brief assignment to get you looking more closely at urban nature: the next time you are walking around town (with your copy of Unseen City, of course) and see a pigeon, check out the color of its eyes, snap a picture and tag it on Twitter with #UnseenCity.

Also be sure to check out Night Life, the weekly adults-only event at the California Academy of Sciences in San Francisco where you can explore music, creatures and cocktails with other curious-minded people.

MPR Raccoon: Exploring the Urban Architecture Behind an Antisocial Climber

Aside from the humans for whom cities are... [Read More]