In the center of San Francisco, there is a plaza with no benches. Its central feature, at the entrance of the plaza, is a unique fountain that was designed by Lawrence Halprin in 1975. The water shoots out at various angles from inside a sunken pit, filled with large granite slabs. It’s a design that kind of pulls you in and invites you to take the steps down to the water and climb in between the hulking stones. And that’s part of the problem.

In 2004, radio producer Ben Temchine, created a really fantastic documentary of UN Plaza, called “The Biography of 100,000 Square Feet” that first aired on my first radio program “Invisible Ink” in May of 2004. (Yep another “invisible” show.) The documentary really takes a hard look at UN Plaza when it was really at its worst and asks the question, is there a point where the good intentions and idealism of a design become so removed from reality that it actually borders on negligence? 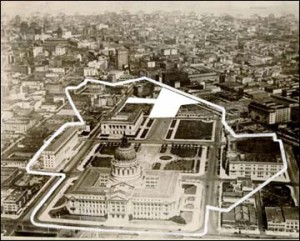 I was down at UN Plaza today (November 17, 2011), recording the fountain and taking pictures. The arts market was being set up and the water was flowing in the fountain that was marred by a bit of trash circling in the eddies, but nothing too grotesque or unexpected. The yellow chain that cordoned off the fountain in 2004 is gone. And this morning, with the market being set up, I got a much stronger feel for the intention of the plaza than was evident when it was at its worst. But the big issues were still plain to see.

The Landscape Architect, Lawrence Halprin, who designed UN Plaza and is featured in the piece, died in 2009. If this is your first exposure to Halprin, I really recommend you look him up and check out his other work. He is absolutely revered in much of the landscape architecture community and the very principles of interactivity and engagement that worked to the detriment of UN Plaza, yielded stunningly successful results in other places. It’s worth exploring more of his legacy.