A paternoster lift lacks most of the essential qualities we associate with elevators; it never stops for passengers and features no doors or buttons in its compartments or on the various floors it services. Indeed, its cars do not even slow down to allow riders to enter or disembark. Despite its eccentric features, paternosters have a big fan base, which largely explains why these unusual elevators continue to exist.

The compartments of a paternoster lift wrap around like a chain, with two side-by-side openings on each level. Passengers step into and out of either the “up” or “down” side on a given floor.

These endlessly looping lifts are slower than conventional elevators, generally moving about one foot per second, which makes it possible to get on and off. Their slow-but-perpetual motion is the key ingredient to their efficiency: with so many compartments and no need to stop, passengers need never wait for a lift. Taken together, all of the small cars can also hold more people than a one-per-shaft system.

The paternoster design dates back to a lift installed in Liverpool by Peter Ellis in 1868 (just five years after Elisha Otis solved a crucial braking problem in standard elevators). Initially called “cyclic elevators,” the name “paternoster” emerged from the system’s resemblance to rosary beads rotating in the hands of a Catholic reciting prayers (“Pater Noster” from “Our Father,” the first words of the Lord’s Prayer in Latin).

Paternosters are most commonly found in institutional spaces like universities or government buildings. Passengers in such places are expected to be able-bodied adults carrying light loads like backpacks or briefcases on their way to do research or other work.

While paternosters became popular in Europe, the design was not widely adopted around the world. In recent decades, many paternosters have also been taken offline, but a few hundred still exist, mainly in Germany, Great Britain and a few other European countries.

In Germany, these popular Personenumlaufaufzüge have been used in theatrical performances, circus shows, art films and for political canvassing (voters asking questions of candidates on each floor as they pass). They have also appeared in films including Berlin Express.

Usability and safety concerns may help explain why the design failed to spread. Some people riding a paternoster past its official endpoints (looping around with the cars) have caused malfunctions. Accidents have also occurred when passengers enter and exit cars. In a few cases, people have fallen into the shaft between cars as well.

Some systematic safeguards have been put in place to help protect passengers, but perhaps not sufficient ones. Gaps between cars often come with warnings or barriers to entry. In many paternosters, there are also pressure-sensitive plates toward the tops of cars that are triggered when an object (or limb) is caught between a car and a floor. Still, such safety systems have been known to fail, and when they do, serious injuries have occurred – lives and limbs have been lost.

Today, most countries have banned the construction of new paternoster lifts, though public support for existing ones has helped keep a few hundred around and operational.

Above and Beyond the Paternoster Lift

While publicly-accessible paternoster lifts are no longer being constructed, other cyclic people-moving systems have been developed more recently for settings such as factories. The “man lift” above allows a worker to step onto a small platform for transport between floors.

A similar and long-standing “valet lift” at the Marina City Towers in Chicago takes staff up and down. This kind of paternoster variant may persist in part because it is designed to be used only by paid and able-bodied personnel who are presumably also shown how it works.

More recently, Hitachi has developed a system that borrows heavily from paternoster lifts, but includes those three missing ingredients generally found in normal elevators: stops, buttons and doors. Like a paternoster, Hitachi’s “circulating multi-car elevator system” has endlessly-looping cars as well as “up” and “down” sides.

Hitachi’s designers claim their new system will use half the square footage of conventional equivalents and be able to move twice as many people at the same time. The catch: traffic jams can happen, just like in normal elevators, since one stopped car can hold up the rest. Worse yet, an immobile car can hold up both the “up” and “down” shafts. 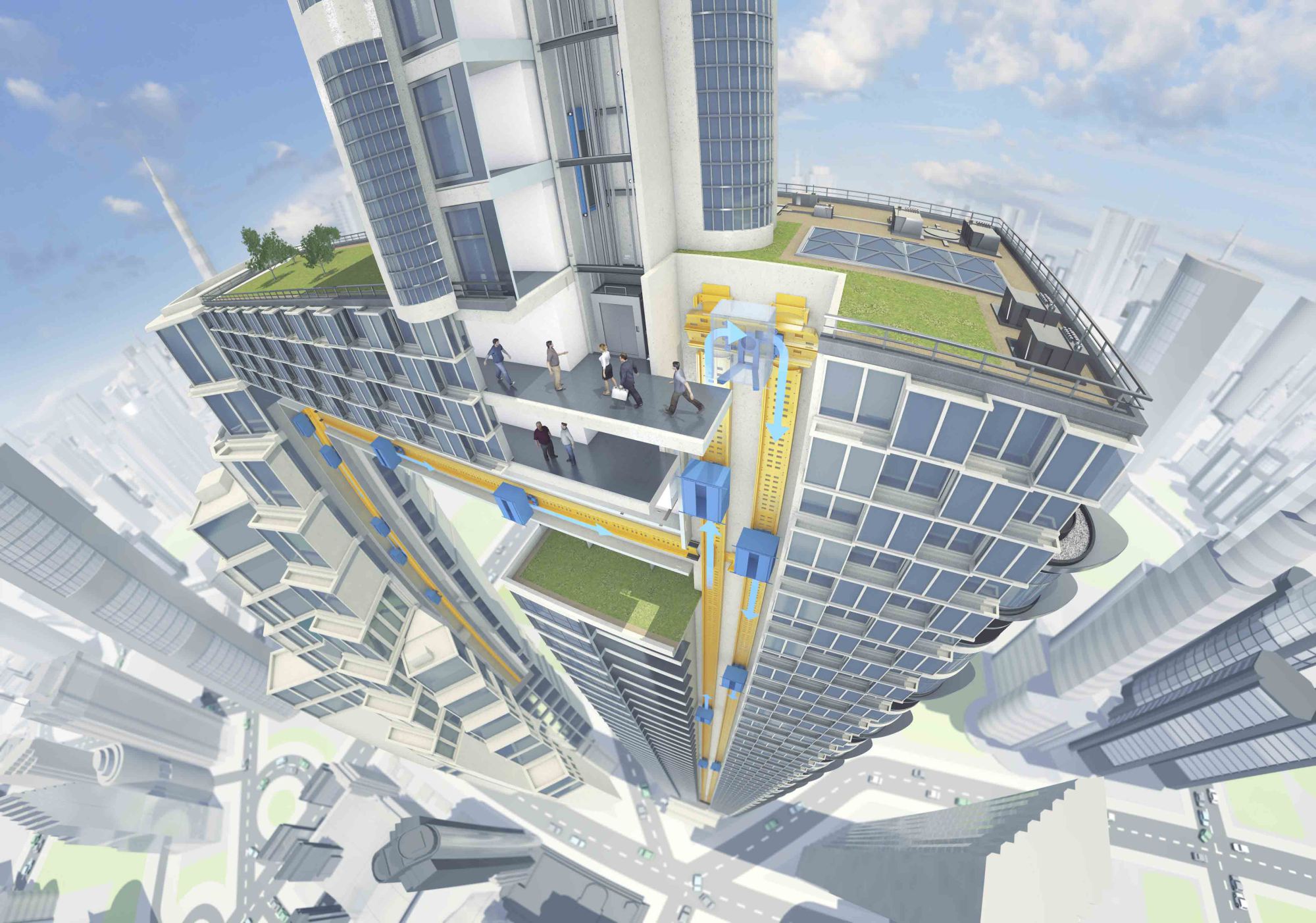 The omnidirectional MULTI elevator system represents an even greater leap in lift engineering, facilitated by maglev (magnetic levitation) technology. Indeed, switching from ropes to magnets could have implications for not just intra- but also inter-building transit.

For starters, like a traditional paternoster (or Hitachi’s new system), more than one maglev car can occupy a single shaft at any given time. The real trick that takes them to the next level, though, is that MULTI cars can travel not just vertically but also horizontally. Imagine jumping into an elevator, going up a few dozen floors, then across a skyway to an adjacent structure. Some distant iteration in this direction could even link disconnected buildings via networks of underground shafts. For now, ThyssenKrupp is scheduled to open their first full MULTI prototype for research and testing later this year in Germany.

Whatever the future of elevators may be, would-be building transit innovators owe a great deal to the out-of-the-box thinking behind the paternoster lift, which challenged fundamental assumptions about the possibilities of vertical transportation.

Insert Coins for Lumps of Coal: A Brief 2000-Year History of Vending...