Elevators are old. They would have to be. Because it is in our nature to rise.

History is full of things that lift other things. In ancient Greece, and China, and Hungary, there were systems of weights and pulleys and platforms designed to bring nobility–or their meals–to new heights.

And somewhere below were draft animals, or even people, tasked with turning wheels to bring these early elevators up and down. One man in France spent the year of 1743 inside a chimney, ever in wait of a bell which would ring when he was required to hoist King Louis XV on a “flying chair,” just so the king wouldn’t have to walk up a single flight of stairs.

These elevators were dangerous. Ropes would snap, and then anything getting raised or lowered would plummet to the ground. Fall one story and you break your leg–fall two stories you break your neck. And this fear of falling kept building heights low. People only wanted to ascend as high as they could walk. The tallest buildings at the time were churches and lighthouses–buildings made up primarily of empty space.

And then came Elisha Otis.

Elisha Otis did not invent the elevator. He invented the elevator brake. He gave demonstrations where he would stand on a platform elevated three stories in the air, and have his son cut the rope with sword. And the crowd would gasp as Otis did not plummet to the ground, but remained suspended in the air.

The Otis Elevator Company received a patent for the elevator brake in 1913. Buildings haven’t been the same since.

The Otis globe logo is all over old elevators.

You’ll find the Otis mark on new elevators, too.

This episode comes from Nate DiMeo’s podcast the memory palace, part of the Maximum Fun podcast empire. You may remember Nate from Episode #27, Bridge to the Sky, which we’ve included after the Otis story. 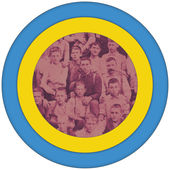 Each episode of the memory palace features pointedly short, surprising stories about the past. It’s sometimes heartbreaking, sometimes hysterical, and often a wonderful mix of both. It was also a huge inspiration in the creation of 99% Invisible.

Interstitial music is by Keegan Dewitt this week. I love that guy.

Previous Episode: Numbers Stations
Next Episode: The View From The 79th Floor