There are rules that dictate what you can build and how. Rules of physics and rules of men who sit on various bureaucratic boards and bodies. These rules dictated that if silk magnate John Noble Stearns wanted to build one of those ten-story towers that were all the rage in 1888, on his 22-foot wide lot, he would need to build walls of stone and brick that were 5 feet thick. With tiny windows. Which left room for an interior that was only 11 feet wide. 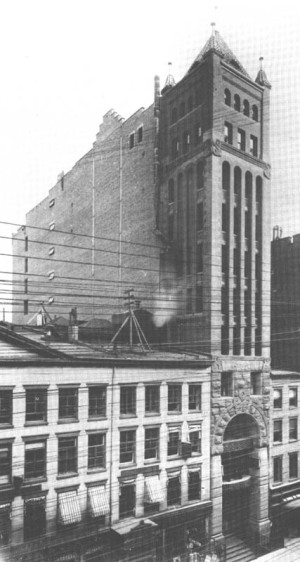 Slice off a few feet for a hallway. A few for a bathroom. A couple for a coat closet. Another for some filing cabinets and an umbrella stand. And he would be asking his well-heeled tenants to work in a dark cell better suited to monks illuminating manuscripts.

Stearns asked the best architects in the northeast for a solution. They all told him it couldn’t be done. Everyone except Bradford Gilbert.

This week’s episode is an original commission produced by Nate Dimeo from “The Memory Palace.” Each episode of the Memory Palace features pointedly short, surprising stories about the past. It’s sometimes heartbreaking, sometimes hysterical, and often a wonderful mix of both. It was also a huge inspiration in the creation of 99% Invisible.