The Metropolitan Correctional Center, or MCC, is a federal jail right in the middle of downtown Chicago. It’s a triangle-shaped skyscraper, 27 stories, with tall, super-narrow, irregularly-spaced windows up and down each wall. The outside walls look like old computer punchcards. As odd as it looks, each of these striking details serves a purpose.

The architect, Harry Weese, made bold innovations that were solutions to practical problems. The triangular shape creates easy sight-lines for the guards inside.  The windows are narrow (5 inches) to prevent escapes, without requiring bars, but beveled out to funnel natural light inside. The interior design was very thoughtfully considered as well. As stunning as it is, the building can also be a little hard to see from up close. 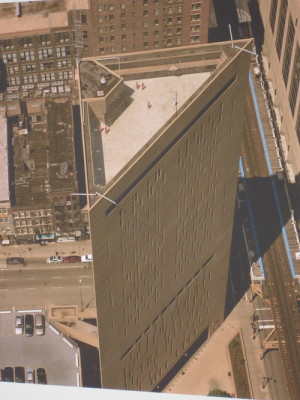 Producer/reporter Dan Weissmann worked nearby for years and rarely looked up at it. This is apparently by design, as well. The triangular shape keeps the building pushed back from the street, there’s a tall hedge between the sidewalk and the plaza in front of the jail, and the El train blocks the much of the view of the floors above. But recently Dan kind of became obsessed with the MCC and discovered that Harry Weese’s groundbreaking design may still gain admirers from the throngs of people that pass it on the street, but for the 681 temporary residents inside, it may not be living up to Weese’s grand vision.

Previous Episode: Unsung Icons of Soviet Design
Next Episode: Bridge to the Sky