The Bijlmermeer (or Bijlmer, for short) was built just outside of Amsterdam in the 1960s. It was designed by modernist architects to be a “city of the future” with its functions separated into distinct zones. To Modernists, it represented a vision of the city as a well-oiled machine. Upon completion, it was a massive expanse of 31 concrete towers. There were 13,000 apartments, many of them unoccupied. Just sitting there, totally empty.  [Note: Just tuning in? Listen to Part 1 below!]

The Bijlmermeer is noisy, thanks in part to planes constantly flying in and out of Amsterdam’s Schiphol Airport nearby. And in the 1970s, many of those planes carried residents from Suriname, a small nation on the northern coast of South America.

Suriname, and a handful of islands in the Caribbean, had been Dutch colonies since the 1600s, serving as a lucrative source of revenue from slave labor. Slavery was abolished in Suriname in 1863, but it wasn’t until the 1950s that its predominantly black population become citizens of the Kingdom of the Netherlands.

In the 1950s, people from Suriname and the Dutch Caribbean, gained the right to join their fellow citizens in Europe, an option many chose to exercise in the 1970s. Spurred in part by fears that the Surinamese independence movement would cause a possible loss of citizenship, more than 100,000 people left for the Netherlands in the years surrounding independence in 1975.

This large migration was a shock to the government of the Netherlands, which now faced a major housing crisis. With places to live in Amsterdam scarce, the apartment structures of the Bijlmer, with their many vacancies, became an attractive alternative.

But some of the housing associations managing buildings in the Bijlmer had quotas in place that limited the number of Surinamese Dutch they would take as tenants. So residents like Just Maatrijk and Guilly Koster decided the only solution was to squat. Koster describes their tactics: “You had some tools that would break open the kitchen window, sneak in and within five minutes you would have a lock put in and you put a chair in it. And from that moment, the Dutch government had to go through a civil process to get you out.”

Ultimately, a lot of the squatters were given legitimate leases, and over time, more and more Dutch Caribbeans moved to the Bijlmer.

This was not a welcome change to all of the white Dutch people living in the Bijlmer. Pi de Bruijn, a Dutch architect who helped design the area (and was living there in the 1970s) called it “an invasion” and “a ghetto.” Guilly Koster admits it took the Surinamese time to adapt to living in the Bijlmer, but disputes the view that it was a ghetto. Koster points out that it was a failed experiment before the newcomers showed up, hence the vacancies.

Increasingly, the Bijlmer attracted the people who couldn’t afford housing anywhere else, or were being discriminated against elsewhere. Over time, thousands of gay people moved there, and immigrants from places like Turkey, Morocco and Ghana who came to the Netherlands for work.

But the fact that the Bijlmer had become undesirable to people with the means to live elsewhere was really disappointing for the people who designed it — they had thought they were creating a better kind of city, a utopian paradise that people would line up to live in. In the late 1970s some them were still working on the project, including the lead architect Siegfried Nassuth. Partly because of his disappointment, in 1979, Nassuth abruptly quit his job at the Bijlmermeer. He walked out of the office, and didn’t even say goodbye.

The visionary behind the Bijlmermeer had given up on it, but the story was far from over. 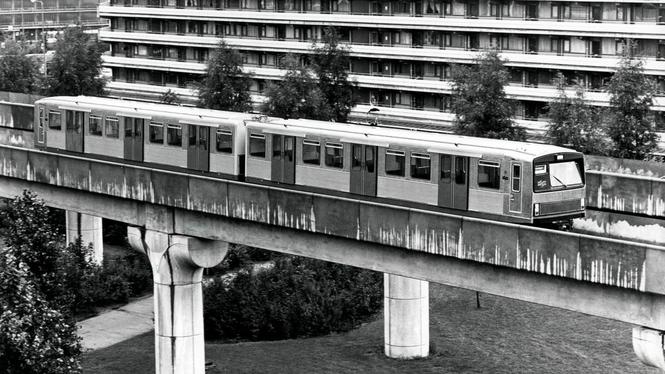 In 1980, the metro train connecting the Bijlmer to the rest of Amsterdam finally arrived, and a shopping center opened up nearby. But the Bijlmer still didn’t fill up. At the highest point of vacancy in the 1980s, 3,200 apartments were sitting empty, about 25% of the units.

Eventually the several separate housing associations that managed the Bijlmer merged into one, but because of vacancies and a vulnerable population that couldn’t always make rent, the association was often broke and couldn’t do routine maintenance. Elevators were constantly broken. There was vandalism, and most devastating of all, heroin.

Tahirah Sabajo, who lived in the Bijlmer as a child, says the addicts in her building mostly hung out on the top floors, where there more vacancies. As she stepped into the elevator each morning, she would pray, “Please don’t go up, please don’t go up!”

Tahirah’s family eventually left the Bijlmer, as did many other families. In 1987, the burglary rate in the Bijlmermeer was two and half times that of Amsterdam and almost ten times the rest of the Netherlands. Over half of the Bijlmer residents were victims of crime in 1988.

By the 1990s, the Bijlmermeer had come to be known as “The Drain of the Dutch Society.” While various small measures had been attempted to help the Bijlmer — including better maintenance, security cameras and subsidized rents— nothing seemed to work.

Finally, the government decided they had to do something drastic, feeling the time had come to demolish some of the buildings. But before they could start, something horrible happened.

On October the 4th, 1992 a cargo plane leaving Amsterdam’s Schiphol Airport lost power in two of its engines. From an altitude of about 4000 feet, Flight 1862 nose-dived into an apartment building at the Bijlmermeer.

The official record says that 43 people died, including the three crew members on the plane. But the actual number was most likely higher since there were many undocumented people in the building.

Even before the plane crash, the government had planned to demolish some of the large high-rise apartment buildings. But the crash provided an extra imperative. The whole country was suddenly focused on the Bijlmer and its struggles.

Over the next 15 years, the city removed several of the high-rise apartment buildings, one after another as the residents were relocated.

The buildings weren’t dynamited, like the infamous housing project, Pruit Igoe, in St. Louis. Instead, they were taken apart story by story to avoid creating the impression of a neighborhood being blown up and forsaken. In truth, they weren’t just going to tear down Bijlmer—they were going to redesign it and make it better.

Eventually, many of the high-rises were replaced with smaller buildings, between one and five stories. Shops were relocated to be closer to the housing, and parking garages were torn down because no one was using them. Elevateds road were eliminated, putting cars and drivers back to ground level. Accommodations for bicycles were provided. The goal now was to mix functions instead of separating them.

Mixed-use development is now popular all over the world, and it’s the exact opposite approach from the modernist idea of separating functions. Planners have also realized people don’t want their cities to function as well organized machines. Yes, people want their apartments to be quiet and  their cities to be safe, but they also enjoy the spontaneity and chaos of traditional cities.

Furthermore, planners realized people didn’t want to live in huge concrete structures. Almost immediately after the Bijlmermeer was finished, another neighborhood in Amsterdam was redesigned — it was done with bricks, a traditional Dutch material.

The Bijlmermeer, and maybe a lot of Modernism, was architecture for architects. It was a top-down, paternalistic approach to city planning. The redesign of the Bijlmermeer did not make that mistake. People from the community were heavily involved in the redesign process. And, in addition to changes in the physical environment, job training programs and special housing for heroin addicts were created. 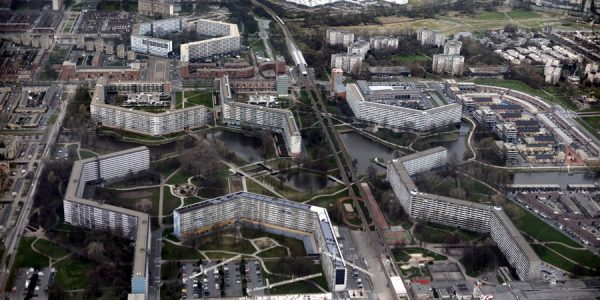 Making it financially possible for people to become homeowners has also been a priority of the re-design, and these days there’s a thriving black middle class there. The Bijlmer is one of the most diverse areas in the The Netherlands, with over 100 nationalities represented, including (still) a lot of Surinamese Dutch.