Born in 1890, young Ralph Teetor was a perpetual tinkerer. He was blinded by an accident at the age of five but didn’t like to talk about his disability growing up. His father recognized his aptitude for building things and created a workshop for him when he was just ten years old, populating it with a variety of materials and tools. Then, as a young adult (at a time when many colleges rejected his application out of hand), Teetor pushed hard to get accepted at the University of Pennsylvania. He graduated with a degree in mechanical engineering.

After university, Teetor worked to dynamically balance steam turbines for U.S. Navy vessels. He was aided in part by his highly developed sense of touch — “His hands were his eyes,” recalls his biographer. Ever innovating, he also invented an early version of the powered lawn mower as well as creative locking mechanisms and other devices. 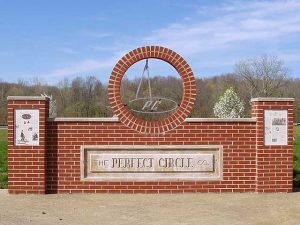 Teetor eventually returned to his hometown in Indiana, where he went to work in the family’s vehicular manufacturing and supply business — one with a long history of working on bicycles, trains and cars. Over the years, Teetor rose up through the ranks of Perfect Circle and went on to become the president of this growing company, overseeing nearly 3,000 employees. Along the way, though, he continued to work on his own designs, and had an idea that would take vehicles in a new direction. 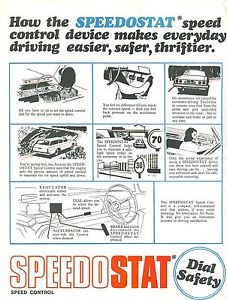 As the story goes, Teetor was riding around one day in a car with his patent attorney, who often drove him places, when the discomfort of speeding up and slowing down gave him the idea for cruise control. Teetor noticed that his driver would accelerate when listening and decelerate while talking. Nauseated by these shifts, he began tinkering with a device to manage speed, receiving a patent in 1945. Over the course of its development, he variously called his invention things like Controlmatic, Touchomatic and Pressomatic before settling on Speedostat.

This wasn’t the first time a speed-controlling technology had been developed — other limited examples were used in early automobiles, and even earlier to manage steam engines. Still, it was Teetor’s design that would lead car companies to adopt cruise control.

His first prototype featured a dashboard speed selector with a governor mechanism that pushed back on the gas pedal, pressing a speeding driver to slow down. To test it, Teetor got down on the floor to depress the pedal while a sighted person sat and steered. Still, this version only helped slow a car, not keep it at a constant speed. He later added “speed lock” functionality (using an electromagnetic motor) to keep a car at one steady pace until the brake pedal was tapped. 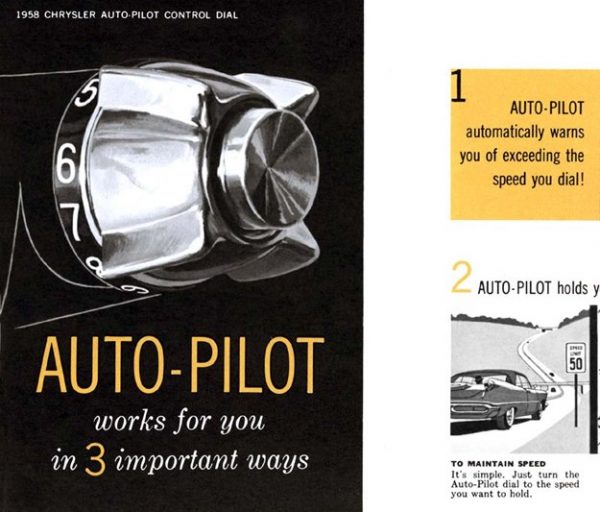 In 1958, Chrysler began putting “auto-pilot” devices in luxury cars as an optional add-on before rolling out the Speedostat more broadly. General Motors coined the name “cruise control,” which stuck. In the 1970s, with spiking gas prices driven by oil embargos, this novel feature became an essential component for American automobiles. The technology helped save over 150,000 barrels of oil a day at the time.

The company had been sold by that point, but Teetor’s influential efforts did not go unnoticed. During his lifetime, he served as president of the Society of Automotive Engineers (SAE) and received two honorary degrees: Doctor of Engineering at the Indiana Institute of Technology and Doctor of Laws at Earlham College. In 1988, six years after his death, he was inducted into the Automotive Hall of Fame.

99% Invisible
Behind the Screens: Windshield-Clearing…

Behind the Screens: Windshield-Clearing Designs from Wipers to Spin…

Today, Teetor’s legacy lives on — his inventions paved the way for other technological advances, and started the automotive industry on a road toward automation that will shape driving for decades to come.

99% Invisible
Crash Course: Are We Headed for an…

Crash Course: Are We Headed for an Autonomous Utopia or Driverless…