In the biographical feature film Flash of Genius, we follow the story of engineering professor Robert Kearns (spoilers ahead). Blind in one eye, the motion of his car’s windshield wipers irritates his vision. As the story goes, he has an epiphany: wipers should operate like the human eye, moving intermittently in the same way we blink periodically. He filed a patent for his invention in 1964 and then sued after automakers refused to license it but developed their own versions. The whole movie revolves around one man’s subtle but critical change to an everyday design: the humble windshield (or: windscreen) wiper.

American inventor Mary Anderson is generally credited with creating the first wiper system in 1903 and they have been evolving ever since. “Like so many things we take for granted,” writes Paul Lukas, “wiper design turns out to be a surprisingly nuanced rabbit hole once you take a moment to notice it, with no two cars seeming to have the same configuration.” There are, however, some particularly popular layouts.

The most common configuration is a tandem system in which paired wipers move together across the windshield, connected to a single mechanism centered below (animated image by Kemmi [CC BY-SA 3.0]). 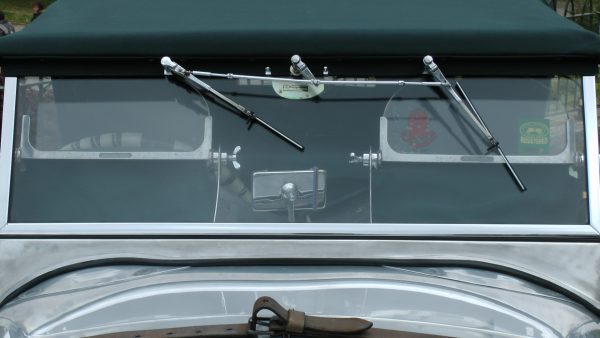 Another more visible version of the tandem blade setup is sometimes found on large trucks. With so much windshield space, these can be mounted centrally but up high on glass but still out of the way.

In cases where a given vehicle has insufficient space in the middle for a motor, an opposed-arm solution is sometimes employed. This layout provides better coverage but requires two motors, adding additional synchronization challenges as well as a new potential point of failure.

There are other variants as well like the somewhat rare monoblade wiper (or: mono-wiper) found, for example, on some models of Mercedes Benz. Monoblades sometimes move like ordinary blades, arcing across the windshield. But more sophisticated versions extend and retract as they trace their paths for more complete coverage.

There are a lot of options out there, but technical and legal limitations as well. Lukas notes that in the United States all systems must comply with “federal regulations, as spelled out by the National Highway Traffic Safety Administration. NHTSA standards specify minimum wipe percentages for three regions of the windshield:”

All kinds of variants have been tried over time and new ones continue to emerge. As aerodynamics continue to reshape car windshield sizes and shapes, for instance, a combination of curved long and short blades is sometimes used. This helps keep the wipers tucked away, reducing air capture as they rest below the hood. And then, of course, there are rear wipers and headlight wipers and the list goes on.

Conventional wipers are also not the only technology out there for keeping windshields clean. Clear view screen systems (also known as spin windows) are used on vehicles including boats, trains and buses. These involve a rotating glass plate that spins rapidly to keep moisture from accumulating on the fast-moving surface. While found more often in machine shops than on automobiles, these were originally developed in the 1930s for ordinary cars.

At the cutting edge of alternative solutions, there are even wiperless windshields. These are designed to use pressurized air or ultrasonic force instead of physical wipers to clear off rain and snow. More complex (and conceptual) wiperless variants may eventually use a combination of nano dust and hydrophobic surfaces to do the job.

On most automobiles, though, wipers still have moving blades that need to be cared for and occasionally replaced. In the video above, car enthusiast and video maker Scotty Kilmer walks viewers through the maintenance process with added wiper selection tips. Silicone wipers cleaned periodically with denatured alcohol, he reports, last much longer — he recommends steering clear of plain rubber.

Circling the Square: Designing with “Squircles” Instead of...

To a casual observer, the difference between a... [Read More]