As cities evolve, architecture often fills in abandoned routes designed for cars and trains. Still, the remnants of old voids can persist in the shapes of new structures. Slicing against the grain of the city, these buildings are especially noticeable when they defy a rigid grid. The cuts they follow are rendered solid, resulting in a kind of architectural scar tissue as if the built environment were healing around old wounds.

Like pieces of a giant puzzle, the resulting patterns can be hard to spot from a street-level perspective. Zooming out on digital maps, one can sometimes trace the effects along entire neighborhoods. 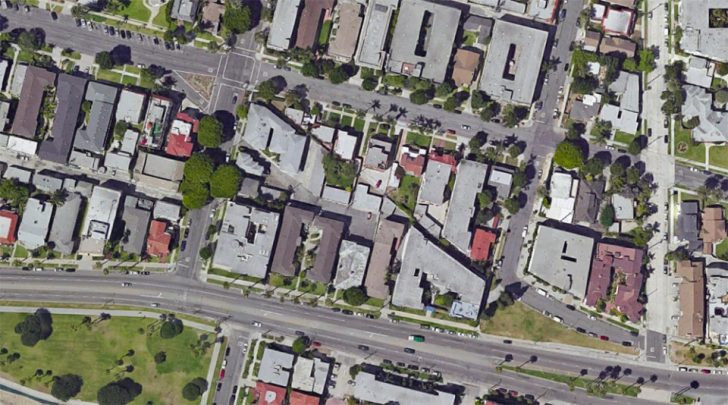 Zooming back in, the oddities of a single block become apparent. Individual buildings may feature an unusual angle here or there but bigger cross-block trajectories are evident as well.

In some places, the walls of otherwise rectilinear structures end up oriented along these historic lines or curves. In other cases, entire buildings end up aligned with past passageways, from their foundations to their rooftops, like the houses above that go against the grain of their neighborhood. “The notion that every city has these deeper wounds and removals that nonetheless never disappear is just incredible to me,” writes Geoff Manaugh of L.A.’s ghost streets. “You cut something out—and it becomes a building a generation later. You remove an entire street—and it becomes someone’s living room.” 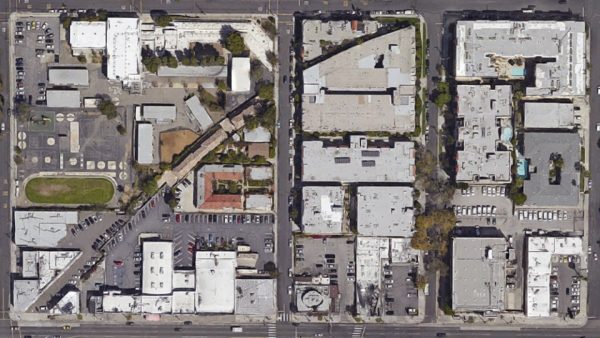 And it is not just architecture that is shaped by re-purposed routes — bits of leftover streets, parking lots and civic infrastructure can end up oriented in ways that reveal a forgotten thoroughfare.

At street level, a single strange angle can signal something larger. Consider the pair of embeds above and below. Above: the facade of a church in San Francisco and its obtusely-angled side. Below: that same church (lower left) as part of a larger scar across the urban fabric.

On the flip side of this phenomenon are what one Toronto area resident calls “scars of anticipation.” Metafilter user Sys Rq describes grand plans from the 1970s that wound up “half-finished and long since abandoned, for the seamless suburbanization and regionalization of a once-standalone town that has since glommed into the Greater Toronto Area.” As a result of anticipated expansion: “We have a couple major thoroughfares that just stop at an obstacle — ravine, creek, railroad — and continue on the other side without a link.”

There are also places where voids remain voids but their uses have evolved, adding functions as parks or walking paths. Above: a greenway follows the open route of a city water pipe in Hamilton, Ontario.

The result of all of this is a sort of urban palimpsest, a term typically referring to a written work (like a scroll or canvas) that is erased and overwritten but on which pieces of an older work can still be seen.

Like sectional artifacts of demolished buildings or products of adaptive reuse, urban architectural scars likewise reveal underlying layers of history (above: infill along an old industrial railway route in Chicago). 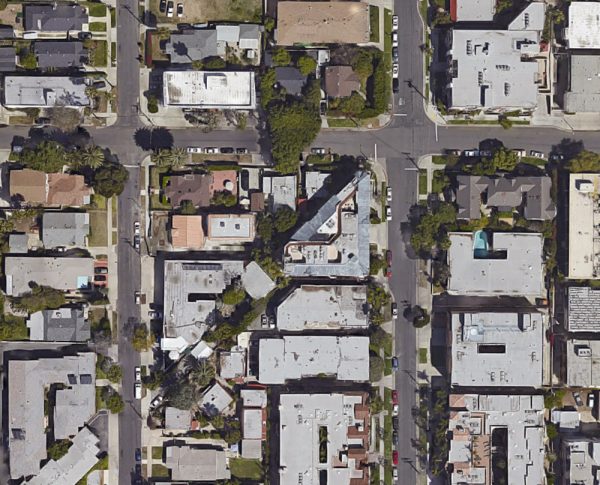 You can find more examples of scarchitecture on Bldgblog, Metafilter and Greater Greater Washington, but also keep an eye out for the phenomenon as you walk around your own neighborhood (or surf Google Maps) — a lone curved or angled wall or lot may well represent a small piece of a much larger puzzle.