This summer, the governors of New Mexico and Colorado got into a fight on Twitter. Words were had. Umbrage was taken. But the fight wasn’t about tax incentives, or highway funding, or water rights. Instead, it all boiled down to this: Colorado’s governor had the gall to insult New Mexico’s pride and joy: its chili peppers.

In New Mexico, chili peppers are everywhere. Ristras of dried chilis hang from every doorway. They are featured prominently on license plates. Chili pepper cheeseburgers are part of the standard menu at McDonald’s. And New Mexico remains the only state in Union with an official state question: Red or green? New Mexicans even spell the word “chili” differently from the United States, opting for the Spanish spelling — “chile.”

June Rutherford was crowned the Chile Queen of New Mexico at 95 years old. June has been in the business since she was a little girl when her father carried her around the fields in a pepper sack. There’s even a chili pepper variety named after her. “Our chili has a better taste than anywhere else,” claims June, “And I’m not bragging. There’s nobody. Texas, Arizona, California, and even Colorado can’t beat us. They can’t beat us. We have something that nobody’s got.”

The Pride of New Mexico In Peril

There’s no secret ingredient to New Mexico’s chili peppers, unless you count tradition. New Mexicans like June have been growing their own varieties for over a century, mostly on small family farms that have remained dedicated to this one beloved crop for generations. But despite these growers’ pride in their peppers, all is not well in the New Mexico chili scene. New Mexico’s chili may be the best in the world, but the chili business is in trouble.

In 1997, New Mexico farmers planted over 30,000 acres of chilis. Last year, there were only 8,400. So while they’ll defend their chili to the death on social media and in the news, many New Mexico chili farmers are beginning to openly wonder what the future of chili actually is in the state.

Glen Duggins runs a chili farm called Five Star Chile in Socorro, New Mexico. He says that every year, things get a little more bleak for the business. It’s not that nobody wants to buy chili, nation-wide demand for chili peppers is at an all-time high. And yet, the economics of being a chili farmer just aren’t working out. “It’s been wild this year,” explains Duggins, “It was bad weather. But it’s more than that it’s… like the perfect storm came together. We had bad weather, you have fewer farmers, […] fewer acres.” To make matters worse, chili grown in Mexico is often trucked over the border, labeled as New Mexico chili and sold for far cheaper than the farmers in the state can compete with. But Duggins says there is one thing in particular that has him — and other chili farmers — especially worried.

Chili farmers are used to bad weather, to competition, but they still have a problem. There just aren’t enough workers to pick the peppers. This September, Duggins had eight workers in the field picking chilis, but he says on a good year in the past, he would have had 30, mostly from Mexico.

Sarah Taber is a crop scientist based in Fayetteville, North Carolina, and she says the great recession scrambled the familiar labor paradigm, in which migrant workers would arrive in the US looking for work on farms. Increasingly, potential foreign workers are staying put in their home countries to work in places like call centers. And Sarah points out that the children of immigrants who came to the US and went into agriculture are not following suit.

Picking chili peppers can be especially grueling work even compared to other crops. Chili plants grow low to the ground, so workers have to hunch over in the hot sun to get them. And they have to wear gloves to protect their hands from the pepper’s oils.  So most workers are skipping chili harvests in favor of other sources of income.  As a result, small family farms like Duggins’s have been planting less and less chili every year in favor of other less labor intensive crops.

An obvious question to ask is why don’t chili farmers just automate the whole process? After all, it wouldn’t be the first time a machine has replaced human hands in the field. Especially, as Sarah Taber points out, in a country with abundant land and scarce labor: “It’s always been very easy if you are a white person in the United States to get your own land and as a result… you could get way more land than you could actually work yourself pretty easily. So then what do you do with it?” 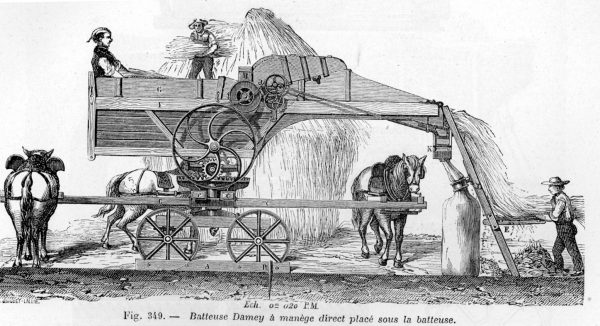 In the south, landowners cultivated more land than they could on their own through the use of slavery. After slavery was outlawed, the same landowners increasingly rented their land out on unfair terms to sharecroppers and, in the north, to tenant farmers, who would harvest things like grain.

But then in the 1880s, commercial production began on a combine harvester — a machine that could do it all at once. That’s why they call it a combine. The combine harvester allowed landowners to harvest all their grain themselves, no extra help required. So they kicked all the tenant farmers off the land and kept the profits for themselves.

In 1936, the first practical cotton picking machine was demonstrated in Mississippi. That same year, a patent was filed for the first fully automatic hay baler. And in 1963, a team at UC Davis released a machine that could harvest tomatoes.

But the reason why automating chili pecking hasn’t taken off is because chili plants are a whole lot harder to design for. Chili plants are bushier than most other crops, and the chilis themselves often sit close to the stem, nestled deep inside the bush, which makes it hard for a machine to access them. When it comes to green chili, it’s even harder. Green chilis are just unripe red chilis which means that the seeds inside of them aren’t ready to germinate yet, so the plant doesn’t want to give the fruit up, and it holds onto it more tightly.

So far, attempts to mechanize the harvest of green chili have not gone well. Stephanie Walker is a crop scientist at New Mexico State University who for the past fifteen years has been heading up a team working on the holy grail of chilis: figuring out a way to harvest green chili peppers with a machine.

When Stephanie first started, automatic harvesters for ripe, ready-to-pick, red chili peppers were already in the process of being perfected, but she wanted to figure out a way to have them harvest green chili, the kind farmers like Duggins rely on. Walker and her team tried machine after machine, but none of them was a match for the chili pepper and its impossibly tough stem. Instead of picking the peppers off the plant, the machine would literally rip up the entire plant and try to stuff it in its mouth, like some kind of mechanical toddler choking on a toy. Another machine they tested had the opposite problem — it was so gentle that it left 40 percent of the fruit on the plant.

After a decade of testing, Walker finally found a machine that showed promise called the Moses 1000. But even after discovering her dream harvester, Stephanie’s work still wasn’t over. Finding the machine was actually the easy part. Walker also had to deal with a larger problem, one inherent to agriculture that, despite the successful automations of the past, still makes many crops —  including asparagus, cherries, apples, saffron, and chocolate — difficult to harvest with a machine.

David Autor is an economist at MIT who studies the interaction of technology and labor, and he says that automation works great when a machine is placed in a highly regulated, highly predictable setting, like an assembly plant. “It’s very easy for a robot to install a windshield or put the lug nuts on a wheel or lift an engine onto a chassis,” he explains, “because each component is near identical to the component that preceded it. However, outside of that setting in the natural world things tend to have a lot of variety and they tend to be rather delicate.”

This means if you want to automate a harvest, you can’t just find a great machine. You have to make your plants more standardized, like cars. So for the past five years, most of Stephanie’s work has been about breeding a whole new plant, one that is designed specifically to be picked by a machine.

Walker’s special peppers will need to have a few key traits, like stronger, deeper roots, more fruits hanging on the outside of the plant, and of course… good flavor. To get a plant with all those things, to get everything on her wishlist, takes time.

Lots of farmers are wary of GMOs, so Walker isn’t using any fancy genetic editing techniques. The traditional breeding process requires rubbing flower parts together in a greenhouse, planting the seeds, and waiting to see what you get, year after year.

During the most recent field test, the Moses 1000 performed well when paired with the team’s latest breeding lines.  Walker’s team is still sifting through the data, trying to figure out exactly how efficiently the harvest went, but after fifteen years of testing, it looks like the holy grail of chilis may be at hand.

If they’re satisfied with the results, Walker will go through what’s called a “seed increase” which means making a whole bunch of these plants so that she can distribute the seeds to farmers.

But the bigger challenge might be convincing farmers to give her seeds and machine a shot. Not everybody is ready to turn to automation. For New Mexicans, part of the tradition they’re so proud of is that these peppers are hand-picked. To them, that’s what makes them New Mexico peppers. They’ve done it for generations.

New Mexico’s chili farmers may soon face a choice —should they follow the future into automation, or rely on its hand-picked history?

Steel-reinforced concrete is a wonder of the modern built... [Read More]

It is one of the most familiar and... [Read More]