Back in the late 1990s, NASA launched the Mars Climate Orbiter to further explore the mysteries of the red planet. The satellite cruised for close to a year, then fired its main engines to enter orbit around Mars. It disappeared behind the planet and never reappeared. The Orbiter had crashed into Mars.

Scientists at NASA began to pour over the data, looking for clues about what went wrong. They eventually discovered that a simple conversion error was to blame. NASA was using the metric system, the international standard, for its calculations. But one of their contractors was using U.S. Customary Units, which is the proper term for the American system of inches, pounds, and gallons. Years of planning and hundreds of millions of dollars were lost, all because someone did the right calculation but in the wrong units. 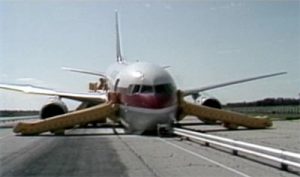 This was not the only time a conversion error resulted in disaster (or near disaster). In the early 1980s, an airliner ran out of fuel mid-flight after a metric conversion error and had to make an emergency landing.

And in the early 2000s, the L.A. zoo loaned a 75-year-old Galapagos tortoise to an animal management program at a local college. The zoo warned that Clarence, the tortoise, was big and needed an enclosure for an animal weighing 250 kilograms, but the college thought they meant 250 pounds (about half Clarence’s actual weight). His first night in his new home, Clarence destroyed it.

But these kinds of failures haven’t been enough to get the U.S. to switch over to the measurement system used by the vast majority of the world. In fact, America is one of just a handful of countries that that isn’t officially metric. Instead, Americans measure things our own way, in units that are basically inscrutable to non-Americans, nearly all of whom have been brought up in an all-metric environment. Most of the world uses meters, liters, and kilograms, not yards, gallons, and pounds.

With so many industries and people crossing borders with so much fluidity, why has the U.S. not fully committed to the system the rest of the world uses? The answer is complicated.

It was in the 1790s that the United States first got serious about “fulfilling the constitutional mandate to creating a uniform system of weights and measures,” explains Stephen Mihm, a history professor at the University of Georgia. “The metric system at that point was just a glimmer in the eye of some French revolutionaries.”

There was some discussion at that time, led by Thomas Jefferson, that the U.S. adopt a decimal-based system akin to the eventual metric system. But when it came time to systematize American weights and measures, inertia won out and nothing changed. The U.S. stuck with its old system of measurements, which it had inherited from the British. That system had its roots in Roman and Anglo-Saxon units that had then evolved over thousands of years before American independence.

Around the same time, French revolutionaries were heading in a new direction. They opted to throw out their old system, which they found displeasingly irrational, and to switch it for a new system — the metric system. The metric system is a decimal system, meaning it relies multiples of ten. Ten millimeters becomes one centimeter. 100 centimeters becomes one meter. And so on.

The French began promoting the system internationally, arguing that it would encourage trade and bring the world together. And it took off. By the mid-1800s, it had gained traction worldwide.

As the metric system spread, some people in the U.S., including educators and scientists, became frustrated. The metric system “lends itself really well to scientific research and inquiry, and for educators, it’s really easy to teach students and it makes a lot of sense” says Mihm.

But abandoning the U.S. customary system did not sit well with a lot of people, including and influential group of “astronomers, theologians, and cranks,” Mihm explains. “And keep in mind that those categories which we consider separate and distinct today were not at this time.” This group spun together scientific arguments with other wild and nonsensical ideas, and developed a theory that to abandon the inch was to go against God’s will. Converting to metric, they argued, would be tantamount to sacrilege.

But the real core resistance to metrication came from a different group entirely: some of the most innovative industrialists of their day. Engineers who worked in the vast machine tool industry had built up enormous factories that included everything from lathes to devices for cutting screw threads — and all of these machines were designed around the inch. The manufacturers argued that retooling their machines for a new measurement system would be prohibitively expensive. They also argued there was an “intuitiveness” to the customary system that made it ideal for shop work.

But then, in the 1970s, a hundred years after the first big push for metrication, yet another attempt was made. Congress passed an act declaring the metric system “the preferred system of weights and measures for United States trade and commerce.” And President Gerald Ford followed it up with an executive order. But the adoption of the metric system was deemed voluntary.

The U.S. Office of Education ran Public Service Announcements to promote metric literacy, and a popular poster was made, featuring a woman in a bikini with the slogan “Think Metric” above her and her measurements, in metric units, below. 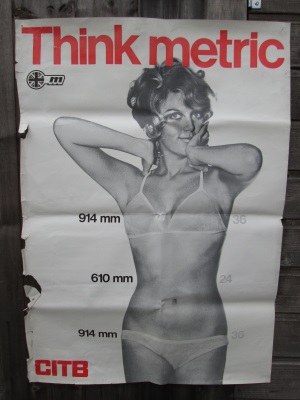 But the 1975 Metric Conversion Act didn’t really have any teeth. It included the word “voluntary,” which meant that businesses and organizations could opt out of the metrication process. The result was that some organizations and industries went metric, while others didn’t. The metric system remained vulnerable to opposition and, once again, the anti-metric forces began to gather.

For one, there were the unions, who were scared that moving to an international system of measurement would make it easier for big corporations to ship jobs offshore.

Various writers and thinkers also rallied against the metric system — people like author Tom Wolfe and futurist Stewart Brand, the creator of the Whole Earth Catalog. In an article titled “Stopping Metric Madness!” Brand argued that: “the genius of customary measure is its highly evolved sophistication in terms of use by hand and eye…. Metric works fine on paper (and in school) where it is basically counting, but when you try to cook, carpenter, or shop with it, metric fights your hand.”

Finally, there was also a political argument against the U.S. going metric. As the Jimmy Carter era of the 1970s gave way to the Reagan era of the early 1980s, a variety of movements rose up against globalism and elitism. “This is the issue of this election,” proclaimed Reagan. “Whether we believe in our capacity for self-government or whether we abandon the American revolution and confess that a little intellectual elite in a far distant capitol can plan our lives for us better than we can plan them ourselves.” The U.S. economy was suffering and the nation’s confidence was low. As a result, anti-metric opposition began to take on a kind of defiant nationalism.

Efforts to metricate the U.S. were left stranded halfway between old and new. In a typically American way, the market decided who went metric and who didn’t and so the U.S. now sits on what’s called a “metric continuum.” The fields of science and medicine are almost fully metricated, and with little controversy. But in the business realm, it’s a mix. Some businesses are fully metricated, others not at all, and a lot are left somewhere in between.

At one end of the spectrum, there are big “companies that have international supply chains,” explains Elizabeth Gentry, the metric coordinator in the U.S. Office of Weights and Measures at the National Institute of Standards and Technology. “What they’re looking for is the ability to sell their product in many marketplaces and they get the components for their product all around the world [that] need to fit together” and create reliable products.

But for smaller, local businesses, the economic imperative to metricate just isn’t there. Take for instance a dairy farmer — milk is not shipped internationally, so retooling from gallons and quarts to liters just doesn’t seem that important.

In between, there are companies that have to maintain separate production lines, even separate warehouses in some cases, to manage different versions of their products for local and international markets.

So the U.S. is a nation stretched out across a continuum of metrication. It uses dual units and experiences conversion confusion. But it’s hard to see how that will ever change, when there’s serious cultural resistance to the system of measurement adopted around the world.

The bottom line is: it’s really difficult to get people to change from a measurement system they’ve been using their whole life. Resistance to change is a massive obstacle to overcome.

That means it’s all metric under the surface.

It is a design technique familiar to anyone... [Read More]