In many ways, the built world was not designed for you. It was designed for the average person. Standardized tests, building codes, insurance rates, clothing sizes, The Dow Jones – all these measurements are based around the concept of an “average.”

The modern use of averages was pioneered by a Belgian mathematician and astronomer named Adolphe Quételet. In the 1830s, astronomers were some of the only people that regularly calculated averages, since early telescopes were extremely imprecise. To obtain more accurate data for say, tracking the orbits of planets, astronomers would take multiple measurements (all of which were slightly different) add them together, then divide by the number of observations to get a better approximation of the true value. Quételet was the first to take this tool of astronomers and apply it to people.

Quételet started with a data set of the chest measurements of over five thousand Scottish soldiers. From this information, Quételet found that the average chest size of these soldiers was 39 and three-quarters inches. To Quételet, this number represented the “true” size of a Scottish Soldier’s chest. The average measurement was more like the Platonic ideal.

In Quételet’s mind, human averages had a certain moral mandate. By his logic, if everyone were optimally fed and lived under the same environmental conditions, they would be average. And this is what society should be striving for: the continual improvement of the average of the group.

Quételet moved on to other data sets. He found statistics of marriages, murders, and suicides, and calculated averages for them. He found that there was such a thing as a “normal” suicide rate, as well as average numbers for divorces and crime,  which was quite scandalous in Quételet’s time—suicide was considered a deeply personal and uniquely horrifying decision, but suddenly averages revealed patterns of society. Questions were raised about whether this kind of discovery could lead to “laws of society” analogous to “laws of physics”—universal truths that cast doubt on human ideas of free will. People became predictable and quantifiable, in their body, size, intelligence, birth, and death. By the 1840s and 50s, Quetelet had become a celebrity, and his radical new science had begun to influence a whole range of people, including Karl Marx and Abraham Lincoln.

Lincoln, after a series of losses to the Confederacy, realized he needed more information about the Union army. He ordered a massive study to assess the soldiers physically and mentally, and, in strict adherence to Quételet’s science, calculated averages of just about everything. These averages began to inform the distribution of food rations, the design of weapons, even the fit of military uniforms.

Before the Civil War, uniforms were custom-sewn. In this war, however, such a massive number of people had to be outfitted that uniforms needed to be mass-produced. But they couldn’t all be one floppy size. Soldiers were put into subtypes: large, medium, and small—classifications that eventually found their way to civilian clothing.

This Civil War study was the basis for the American military’s long-standing philosophy of standardization. So in 1926, when the Army designed its first airplane cockpit, they measured the physical dimensions of male pilots and calculated the average measurement of their height, weight, arm-length and other dimensions.

The results determined the size and shape of the seat, the distance to the pedals and the stick, and even the shape of the flight helmets. This means that, in part, pilots were selected based on their ability to fit into the cockpit designed for the average 1920s man.

This worked more or less up until World War II, when the Army began recruiting hundreds of new pilots to expand its air forces (which became a separate branch of the military in 1947). But with the birth and expansion of the Air Force came a decline in performance and a rash of deaths. Even with no war, pilots continued to die during training, as they were unable to control their planes.

The high death rate in the Air Force was a mystery for many years, but after blaming the pilots and their training programs, the military finally realized that the cockpit itself was to blame, that it didn’t actually fit most pilots. At first, they assumed it was just too small and that the average man had grown since the 1920s, so in 1950, they asked researchers at Wright Air Force base in Ohio to calculate the new average.

One of these researches was a young Harvard graduate named Gilbert S. Daniels. In his research measuring thousands of airmen on a set of ten critical physical dimensions, Daniels realized that none of the pilots he measured was average on all ten dimensions. Not a single one. When he looked at just three dimensions, less than five percent were average. Daniels realized that by designing something for an average pilot, it was literally designed to fit nobody. 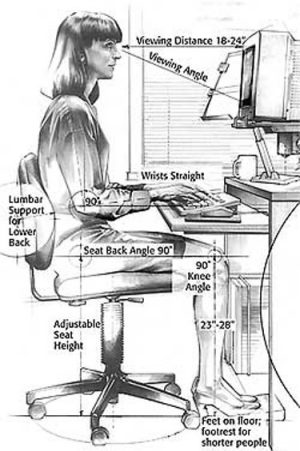 Today, we take for granted that equipment should fit a wide range of body sizes rather than being standardized around the “average person.” From this understanding has come the science of ergonomics: the study of how to match people’s physical capacity to the needs of the job.

Whether it’s the equipment, or the whole work environment, design must accommodate more people who are outside the average … because in reality, no one is actually average.