If you have tried to buy toilet paper in the last few weeks, you might have found yourself staring at an empty aisle in the grocery store, wondering where all the toilet paper has gone. Concerns over the toilet paper supply is not limited to the United States. In the Netherlands, a Dutch worker went viral after he filmed a video of himself zooming around a warehouse stacked to the rafters with toilet paper, laughing maniacally.

Clearly, the world has been obsessed with toilet paper. Stephanie Joyce is a reporter based in Santa Fe, New Mexico, and she heard about a company in Albuquerque called Roses Southwest Papers — which was relatively unknown before the fear of the COVID-19 virus pandemic began setting in. Roses normally sells to what is called the away from home paper market, meaning the toilet paper and paper towels you see in restaurants, sports stadiums and corporate campuses. But thanks to the pandemic, most people are using — and buying — exclusively at-home products.  That’s part of the reason there never seems to be enough on the shelves. So this March, in an effort to pivot to the at-home market, Roses began offering an option for the public to buy their paper directly from a kiosk at their warehouse. New Mexicans flocked to the kiosk in droves. 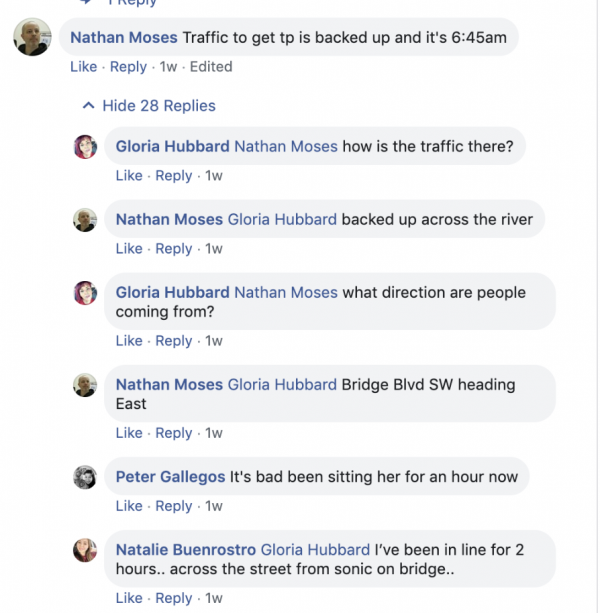 Multiple lines of traffic extended in every direction, reaching lengths of nearly 3 miles. Some people had been waiting for hours—one person waiting in line actually had her daughter urinate out of the side of the car so that they wouldn’t lose their place in line in order to use the restroom. And these people waiting in a 3-mile long line to buy toilet paper aren’t hoarders, they simply could not find toilet paper anywhere else!

Although it may seem like a product that we’ve always been reliant upon, toilet paper has not actually been around very long, and may not be as essential as we think it is. Instead, it’s the product of very good marketing. For most of history, many would have thought it would be absurd to manufacture a product specifically for wiping after using the restroom because people used to use anything that was available. 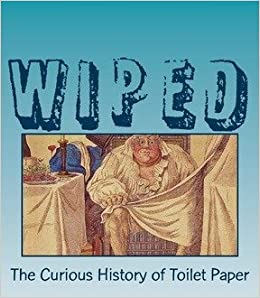 Ron Blumer is the author of Wiped: The Curious History of Toilet Paper, and he says that for most of human existence, people never used anything like paper to wipe. Instead, they would use rocks, shells, moss, or just plain water. “The idea is you wet your hand with water and you use your left hand to clean your rear end, and then you wash your hand and then you rinse and repeat as they say,” Blumer explains. Apparently the Romans utilized a communal sponge on a stick, sitting in running water, to clean themselves. (which is not recommended by 99pi).

In China, however, disposable toilet paper has been used for a very long time. China was where paper was actually invented and by the 1300s there were records of paper being made specifically for use in the toilet. By the 1600s, intentionally disposable paper products caught on around the rest of the world with the first newspapers. By the late 1700s making paper out of wood instead of rags became more prevalent, which meant paper became a whole lot cheaper, so people began to wipe with leftover paper products. But dedicated toilet paper had yet to catch on in western countries.

Blumer credits a man named Joseph Gayetty as the first person to actually sell toilet paper in the Western world. In the 1850s Gayetty made a pitch that using corncobs and old newspapers was actually bad for you. “He decided to make this a form of paper, which was thin, and sold it as [being] more gentle on your rear end,” says Blumer, “and presumably that had some connection with not hurting your delicate membranes and helping if you had hemorrhoids. But we probably wouldn’t recognize this toilet paper as the same kind we use today, it was probably closer to tissue paper, but it was thin and would get the job done.” 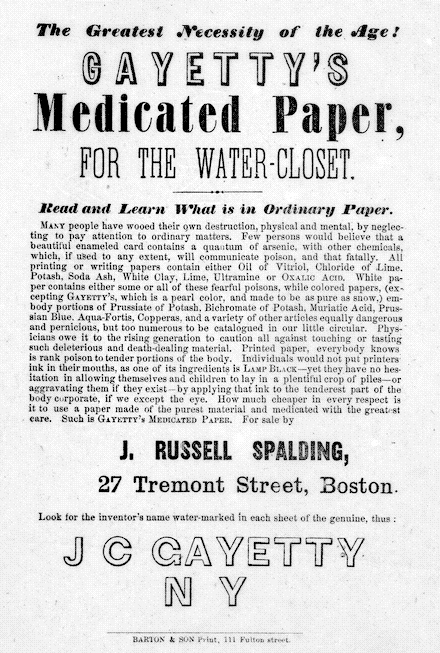 Gayetty’s paper came in a box like tissues and was made of hemp. It wasn’t a very popular product because it was very expensive and only the rich could afford it. Most never saw the use for this paper anyway. But one other invention changed the need for Gayetty’s paper—indoor plumbing.

Toilets were moving inside of houses and they were now being connected to sewer systems that flushed with water. But the problem was that indoor toilets were very finicky, and if you were going to flush with what you wiped with it had to be very delicate like Gayetty’s paper. Gayetty pivoted the marketing for his paper entirely, rather than focusing on health, he focused on the sensitivity of indoor plumbing.

But a competing businessman named Seth Wheeler is the one credited with creating toilet paper as we know it today — in a roll and with sheets.  “Wheeler came up with the idea of perforation first, and it wasn’t in connection with toilet paper. It was in connection with wrapping paper,” Blumer explains. “He thought that it would be very convenient for stores to be able to pull off a sheet of paper and rip it along a perforation.”

The patent for toilet paper should settle the over vs under debate pic.twitter.com/arZl6l6ALn

Wheeler would go on to patent all sorts of toilet paper-related innovations, some more sensible than others, including a role with hexagonal sheets, which he thought would be easier to tear. 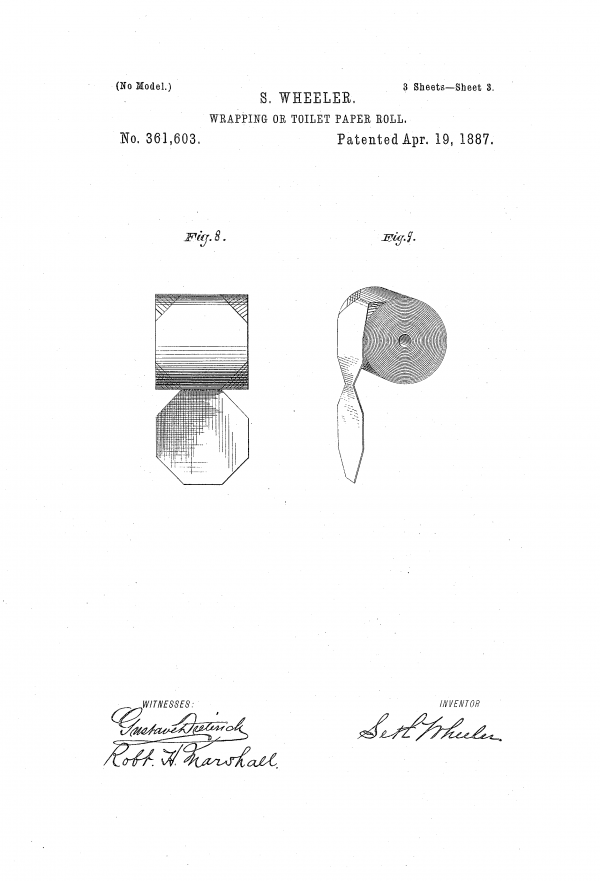 But it was yet another competitor that turned toilet paper a ubiquitous household item—the Scott Paper Company—the very same one we see on shelves today. Scott started making toilet paper around the same time as Wheeler, but they had a lot better marketing. They actually took Gayetty’s original strategy as toilet paper as the solution to hemorrhoids but did it better by putting doctors in their ads and saying that other brands had wood chips and splinters in their product. Meanwhile, they played up their own paper as delicate and dainty. And it worked! Scott ended up owning the market share of the industry throughout the 1950s. 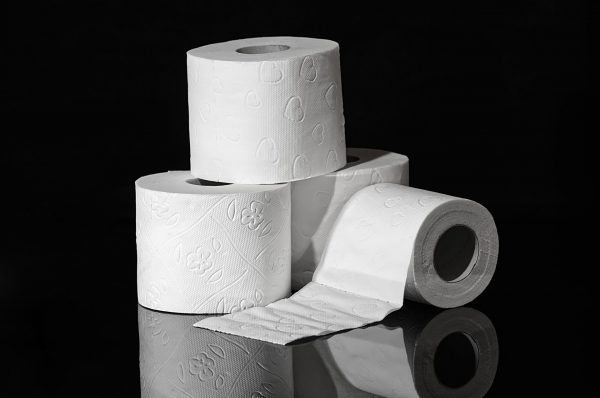 Now toilet paper is a $31 billion industry. With people fighting over toilet paper in supermarkets and queuing up for hours to buy a supply, it probably feels like there’s a shortage of bath tissue. But we probably aren’t in danger of running out of it in the long run. Unlike a lot of other products, most of the toilet paper supply chain is entirely in the US or North America, so manufacturing hasn’t shut down at all, and people are not consuming any more toilet paper than usual. The bottleneck lies in the difference between how quickly people are buying it in stores and how much production can be ramped up. The other reason for the shortage is that away-from-home suppliers like Roses –that normally sell to larger, institutional clients — need time to arrange contracts and shipments to stores that sell directly to consumers.  There is a limit to how fast they can pivot, and how quickly their machines can actually run, but eventually, the supply should be able to catch up to demand. In the meantime, there’s always Roses’s factory kiosk…

… or water. Somewhere around 70% of the world still uses water instead of toilet paper, and for good reason. Some studies have actually shown that toilet paper isn’t as sanitary as we think it is and does very little to protect us from bacteria as opposed to water and, unlike Galetty claimed, toilet paper is not good for the treatment of hemorrhoids.  When it comes down to it, toilet paper isn’t necessarily that essential of a product. It’s something humans have lived without for thousands of years. But if it brings people comfort to have in this extraordinary situation, by all means, go buy it. Just make sure to wash your hands!

Special thanks to Ron Blumer, our expert on the history of rear-end cleaning.

Previous Episode: This Day In Esoteric Political History
Next Episode: Unsheltered in Place

No one knows for sure just how long... [Read More]

Shaped like a small tunnel (with an arched... [Read More]