I love those moments when you’re walking in your neighborhood and suddenly nothing is familiar. In a good way.

Sean Cole began seeing his neighborhood, actually the whole city of New York, with new eyes because of one artist who is trying to do nothing less than draw all the buildings in New York.

James Gulliver Hancock’s drawings are intricate, but still a little cartoony. Little squiggles and dots hover above the roofs, as though they’re saying “Look Out!” or maybe “ta-da!”

Cole became infected with Hancock’s worldview and began to appreciate all the tiny details the artist would highlight.

This building in Greenpoint, 144 Franklin, is one that Sean has seen often in Greenpoint. When he sees it, it looks like this:

Up the street at 97 Franklin, James turned this bodega…

James recently published a book with the audacious title All The Buildings In New York (That I’ve Drawn So Far). Most of buildings are in the book are in Manhattan. 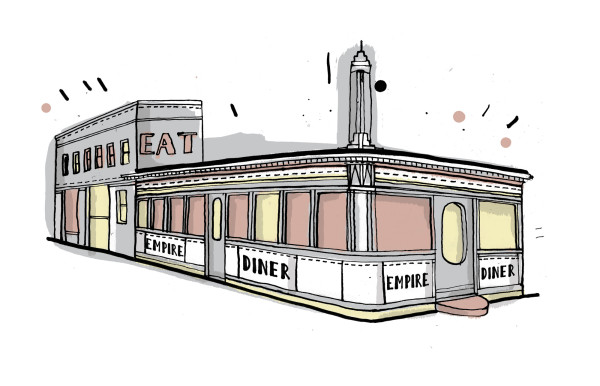 This episode was reported by public radio superstar Sean Cole — who, thanks to you, is joining the 99% Invisible team! Yay!

At the end of the episode I mention Mooninite and their label, Hel Audio, which is also the home of 99pi fav OK Ikumi. Since I have a 13 year old VW Golf with a tape deck, I LOVE the fact that they release their music on cassettes. Highly recommended.