Reading stories about overpopulation, it is easy to imagine we live on a planet that is packed with people from coast to coast on every continent. As these data visualizations illustrate, the reality is quite different. Most humans are concentrated in a relatively small set of densely-packed places. Below: half of the Earth’s population lives in the vast black areas while the other half occupies the yellow.

Like tiny pixels on a huge black-and-yellow screen, the 28 million cells are binary: each yellow cell represents an 3-by-3 mile area of land with a population of 8,000 people or more (or: 900 per square mile). Any other 9-square-mile cell with lower density is shown as black.

The more sparsely-populated black zones span 99% of the Earth’s land, while only 1% are lit up in yellow. The organization of these denser areas, however, varies greatly by region, which becomes apparent when zooming into different continents and countries. 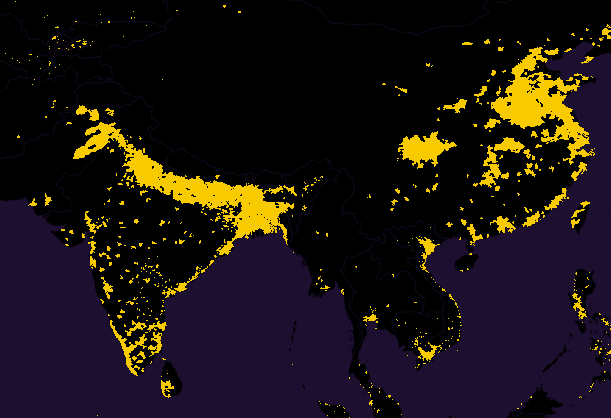 For starters, huge swaths of Southeast Asia are tightly packed with yellow clusters and bands of high density. In total, nearly half (over 40%) of the world’s population lives in the relatively small area shown in the image above. Some of this urban concentration is coastal, but much of its is found in contiguous sprawling yellow sections cutting inland across parts of India, China and Bangladesh.

The island of Java (in Indonesia) and the islands of Japan stand out as well. The former is the most densely-populated island on the planet, while the latter is home to the world’s most populated city: Tokyo. 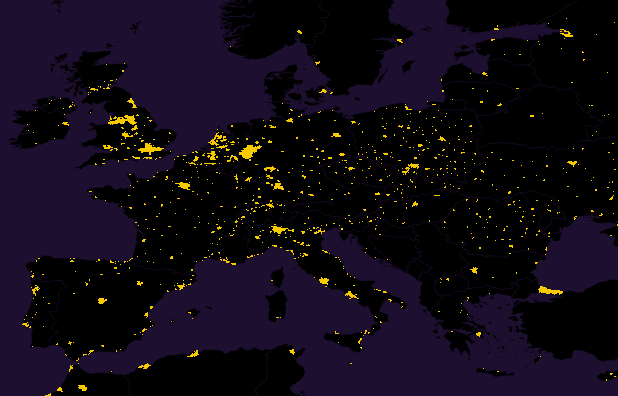 In other areas of the world, the yellow zones are more distributed. Across Europe, for instance, bright patches are somewhat more focused in the center, but the overall impression is one of nodes in a network rather than endless stretches of mega-cities.

Africa and South America have a smattering of yellow blips, mostly around major international cities. Notably, and exceptionally for its continent: Cairo has the single highest-density yellow cell in the world, with over a million residents fitting into just nine square miles.

In the United States, we find roughly the same effect that was seen at a global scale: about half of the population lives in the black area, and half lives in the yellow. The distributions fall mainly as one might expect: more density along the East Coast, some stretches along the West Coast, and a relatively black expanse across the mountain states.

Of course, space alone does not speak to the resource needs of a growing human population, including water and agricultural requirements, or to the preservation of nature more broadly. Still, given currently projected future growth by continent and region, a lack of land for human occupants is clearly not the core population issue.

Some continents, like the Americas and Europe, are predicted to level out in terms of population, while others, like Asia, are slated to increase, peak and then begin to decline. Places with the highest long-term projected growth rates (like Africa) still have plenty of relatively open areas for people to fill in with the cities of tomorrow, so long as enough other resources remain to support them.