Creative comic book layouts work with other artistic choices to tell stories that go well beyond what narration or dialogue could accomplish alone. But these design decisions are not always obvious. Often, they operate subtly in the background, at least until someone comes along and expertly shines a spotlight behind the scenes.

“A lot of artists and writers in comics are often working with invisible tools,” explains Hassan Otsmane-Elhaou. In his ongoing video series Strip Panel Naked, Hassan breaks down and analyzes visual and textual design choices. His videos illustrate how artists control “eyelines, reading speed, the way you understand character relationships and action,” deconstructing everything from panel density to color choices. Like a good comic book: they are carefully paced and expertly crafted.

A lifelong comic book fan, Hassan says that “it’s a very unique art form, because like cinema it’s entirely visuals-based, but unlike cinema, you don’t have as much direct control on your audience.” Instead, “you have to utilize a lot of clever tricks to get your audience to do what you want them to, without it ever really feeling forced.”

Strip Panel Naked zooms in on specific series and issues, using these as foils for explaining different layout and design strategies. Through enthusiastic narration, Hassan explains what the viewer is seeing while helpful graphic overlays show what he means in specific sequences.

The video series is wonderful for all kinds of reasons, including its versatile appeal. It is a great resource for aspiring artists aiming to learn the trade as well as comic fans looking for the stories behind the stories. Hassan’s selection of what to feature is also helpful to comic newcomers surveying the field of options — some picks include new iterations of classic Marvel and DC characters, but he also highlights fresh series like Saga (from Image, viewer discretion advised). The videos are also helpfully categorized by publisher as well as topics like color, movement, layouts, subtext and narrative techniques.

Hassan’s are not just casual observations, either — his experience in both the comic and film industries shines throughout the series. Outside references are peppered in, too, including quotes from industry experts and scientific studies to reinforce particular claims. 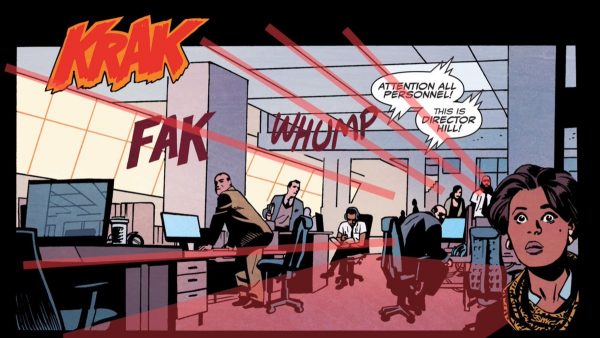 For those interested in supporting the series, Hassan has a Patreon page. On it, he explains the inspiration behind Strip Panel Naked: “This started because I wanted to have these kind of discussions about comic art with other people. I want to help showcase these great things that artists and writers are doing in books, and have an open discussion about understanding the medium. Hopefully, together, we can help people move from enjoying an issue of a comic, to really understanding why they did.” Check out Hassan’s YouTube channel for more, and read up on his latest project: PanelxPanel, a digital magazine about comics.