Author of Understanding Comics: The Invisible Art, cartoonist and theorist Scott McCloud has been making and thinking about comics for decades. His classic volume explores formal aspects of comics, the historical development of the medium, its fundamental vocabulary, and various ways in which these elements have been used. 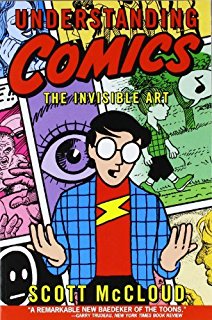 When pressed to give a full definition, McCloud explains that comics are a distinct art form of “juxtaposed pictorial and other images in deliberate sequence.”

But in everyday usage, there’s no need to get that formal or technical. McCloud believes calling them “comics” is fine, as long as people realize the medium has the potential to do more than just funny strips in the Sunday paper or action-packed graphic novels. When Scott started out, superheroes were in vogue, but today there are graphic memoirs and silent comics, folk tales and stories of magic (as in Sandman or Saga), plus a lot of less-conventional hero narratives (including some creative and groundbreaking recent runs of Hawkeye and Vision).

There are certain universals in comics, and one of those is choosing the moments to represent — any narrative can theoretically be broken down in infinite ways. An artist might choose to stretch a few seconds of activity into dozens (or thousands) of incremental panels. 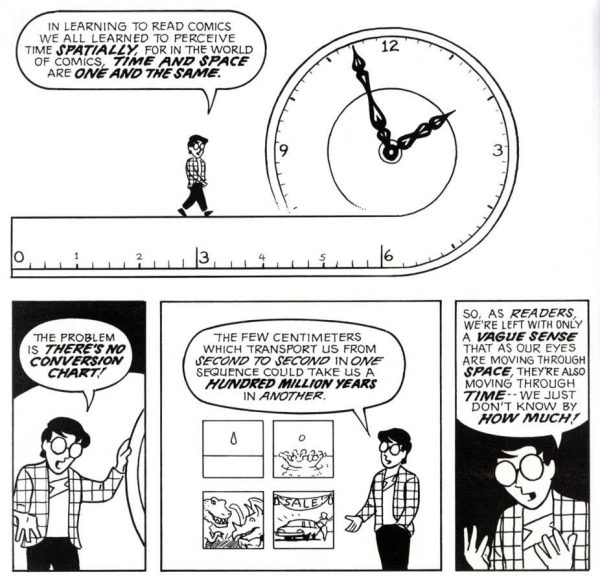 Or, at the other extreme, someone might make a two-panel sequence showing the history of the universe, beginning to end, illustrating the Big Bang and (perhaps) the Big Crunch.

Beyond picking moments to depict, artists also have to choose the framing — how close or far away will the viewer be? Will they see from an “eagle’s eye” or “worm’s eye” view? 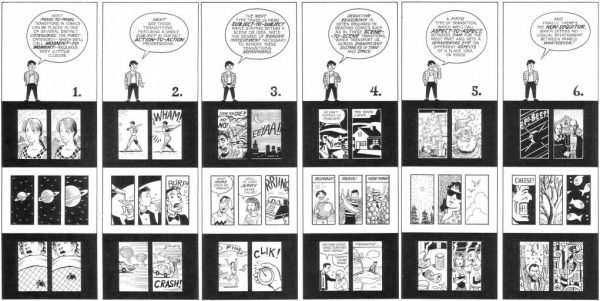 Then, of course, there is the balance of words and pictures, and how the story flows from one frame to the next. A lot of readers (and artists) take some of these things for granted, but they represent design decisions that are made and have evolved over time.

Speech bubbles, for instance, have a centuries-long legacy with antecedents in ancient art. Dialogue is part of life, and any medium that is going to represent life has to include it. But it’s also something that can feel like a “desperation device,” says McCloud — a product of necessity — and some “silent” comics can be very powerful, too.

To see a range of approaches and how comics have changed over time, McCloud recommends checking out work by Art Spiegelman (including but also beyond Maus), Chris Ware’s Building Stories, silent comics by Jim Woodring, The Arrival by Shaun Tan, Persepolis by Marjane Satrapi, and City of Glass by Paul Karasik and David Mazzucchelli. Also discussed in this episode: Bingo Love and Smile. You can see more of Scott’s ongoing work and writing on his website and click here to buy his book.