Before uniting behind a single symbol, scientists working with dangerous biological materials faced a dizzying array of warning labels that varied from one laboratory to the next. Then, in 1966, Charles L. Baldwin of Dow Chemical and Robert S. Runkle of the National Institutes of Health co-published a critical paper in Science. Their piece called for the adoption of the biological hazard (or: biohazard) symbol as we know it today. This new symbol they hoped to become standard, however, was unconventional: a crowd-tested solution designed to be maximally devoid of obvious meaning or associations.

Like radiation risks, biological threats are often insidiously invisible, odorless and tasteless, and thus hard to symbolize in anything but an abstract way. Accordingly, rooms and packages containing dangerous microorganisms (or viruses or toxins) required high-visibility warnings, but these graphics generally lacked a common history or design language.

In the early 20th Century, the United States Army labs used an inverted blue triangle, for instance, while the Navy employed a pink rectangle; meanwhile, Universal Postal Convention called for a white staff-and-snake on a violet field for biological transportation. While developing containment systems for dangerous biological materials with the NIH, workers at Dow grew concerned that this lack of universality was contributing to accidental infections of laboratory personnel.

To address their concern, a group of engineers and designers at Dow began to work collaboratively toward a design solution. The project team drew up a set of six criteria for the development of a standard bio-hazardous material warning graphic. The symbol should be:

Without an obvious way to graphically connect the symbol to invisible biological matter, the design had to avoid creating accidental associations with things people can see. “We wanted something that was memorable but meaningless” said Baldwin in an interview, “so we could educate people as to what it means.”

With that guiding principle in mind, the team at Dow set about developing potential candidates. In order to ensure the final symbol was indeed both memorable and meaningless, the project engineers and designers took their six solutions to the public for mass psychological testing.

First, 300 people from 25 cities were shown an array of six newly-designed symbols alongside 18 commonly-used symbols, including Mr. Peanut, the Texaco star, the Shell Oil symbol, the Red Cross and even the swastika. Participants were asked to identify or guess the meaning of each (creating an associated “meaningfulness score”).

One week later, those same participants were shown an array of 60 symbols, including the original 24, plus 36 more.  They were asked to recall which symbols they had seen in the first round of the study, (creating an associated “memorability score”).

One symbol stood out from the pack, having achieved the top score in both categories from among the six competing designs. The winning candidate was both the easiest to remember but hardest to associate with any particular meaning, according to the results of the survey. 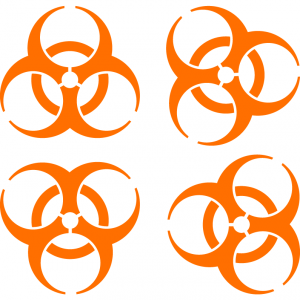 This biohazard symbol met or exceeded the various other initial criteria as well. It was not only easy to stencil, but possible to draw with just a straight edge and compass, despite the apparent complexity for the form. Its trefoil (three-leaved) design was another asset; a shape with three-way symmetry can be stuck or stenciled onto a surface in any orientation, and still be easily recognized if a barrel or box is overturned or flipped. Bright orange (against a contrasting background) made it easy to see.

Still, despite its claim to be association-free, the biohazard symbol arguably benefited from its trefoil similarity to the ionizing radiation symbol developed a few decades prior. This simpler-looking predecessor was created at the University of California, Berkeley for use with things like x-ray apparatuses, medical beam cannons and particle accelerators. It looks a bit like radiation emitting from a central atom, which is arguably somewhat easier to visualize than microorganisms. Unlike the biohazard symbol, though, this relatively simple symbol was bound to have relatives, including an ancient Roman shield that likewise carries a black-and-yellow trefoil.

Visual connections aside, the next step for the biohazard symbol was to attach meaning to the still-meaningless form by associating it with a set of usage criteria. It “shall be used to signify the actual or potential presence of a biohazard,” advised Baldwin and Runkle in 1966, “and shall identify equipment, containers, rooms, materials, experimental animals, or combinations thereof which contain or are contaminated with viable hazardous agents.” The authors also define the term “biohazard” as referring to “those infectious agents presenting a risk or potential risk to the well being of man, either directly through his infection or indirectly through disruption of his environment.”

Research groups at the U.S. Army Biological Laboratories, Department of Agriculture and the NIH agreed to test the new symbol for six months. Once it was adopted by the Centers for Disease Control (CDC) and the Occupational Safety and Hazard Administration (OSHA), it quickly became the standard in (and in some cases beyond) America.

Unlike most signs, designed to be visual analogues of physical phenomena,  this symbol works by being distinctive, compelling and complex … all while remaining easy to remember. Its success ultimately hinges on the design maintaining a safe distance from other familiar emblems, shapes and symbols. These days, however, its compelling distinctiveness (which has helped popularize biohazard t-shirts, mugs and stickers) may also be a drawback. Baldwin has expressed concern:

”Every time I go into the doctor’s office or the dentist’s office or a hospital anywhere, I’ve always got my eye out for it. Naturally, I’m proud of the fact that I was able to … direct a program that evolved into this symbol that’s so widely recognized, so helpful. But I ran into a peculiar situation one time a couple years ago when someone was putting on a seminar on biohazards. As gifts for the participants, he devised a beautiful tie with little biohazard symbols all over it. This got me upset, and I sent him kind of a nasty letter saying this symbol was not designed to be used sartorially.”

His reaction and position may sound a bit harsh, but they are grounded in legitimate concerns: the more popular the symbol becomes outside of its intended use cases, the less effective it will be at saving lives by alerting people to actual biological hazards, now and in the future.