The W4-2, also known as the Lane Reduction Transition Sign, is one of the most ubiquitous road signs in the United States — historically, it has also been on of the most confusing. This “Lane Ends” sign often appears in places where a passing lane is eliminated along a rural highway or an entrance lane merges into the main lanes of a freeway. 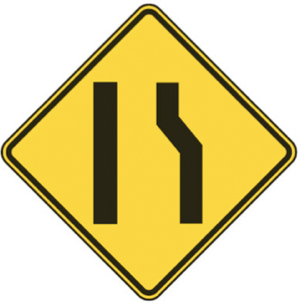 The old version of the sign features two lines running parallel at the bottom with one angling in toward the top. This design can be mirrored to indicate a merge from either the left or the right.

It is hard to tell, though, whether the lines represent lanes or their borders — if lanes, then it looks like two routes coming closer together (not merging). The existence of text-only supplements  (“LANE ENDS MERGE LEFT”) also suggests a graphic-only approach can be baffling.

Indeed, an early 1990s study by the Texas Transportation Institute found that only 61% of surveyed motorists could correctly identify the purpose of the W4-2 sign. The surveyors “concluded that the difference between fewer lanes, one lane and narrow lanes ahead was not apparent,” writes Eric G. Feldblum of the Connecticut DoT. A subsequent survey of elderly drivers in the U.S. and Canada found that fewer than 40% of participants could properly understand the sign. 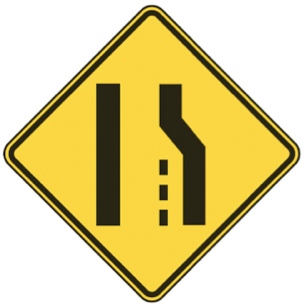 So in 2001, the Federal Highway Administration’s Office of Transportation Operations pitched an alternative based on the original with a small but critical change.

Approved in 2003 (with a compliance date set for 2013), the modified W4-2 now features a dashed line to add clarity without introducing any dramatic changes. The solid lines were left in place, but their function (bracketing roads) is more obvious. This new and improved version can now be found across the country (though old variants still exist as well).

The solution is elegant, simple and additive — it requires no fundamental reformatting, building instead on the existing sign. It is thus also recognizable to those familiar with its predecessor and visually similar to older signs that can still be found on the road.

Despite its simplicity, the modified W4-2 solution seems incomplete. It is unclear, for instance, what the dashed line indicates — is it a separator that divides two lanes or the path of the car? If the dashes represent a lane division, then the ending lane is rendered comically narrow. If instead the dashes represent the vehicular path that is coming to an end, the W4-2 diverges from other W4-series signs (e.g. W4-3 and W4-6) in which dashed lines signify lane separations.

Also, for most signs in the W4 series (above) as well as other W-series signage (below), solid lines represent the paths of cars. The modified W4-2 breaks that convention by rendering lanes as voids rather than solids, regardless of how one interprets the dashed line (as divider or path).  So, issues of continuity aside, what if a road sign designer were able to start from scratch?

Representing routes of travel as voids creates potential figure-ground confusion on the W4-2. Drivers used to seeing solids as routes on other signs could have trouble with this strange exception.

As illustrated above, the figure-ground issue can be addressed using the graphic language already established by other signage. In this design, the two main lines of the W4-2 are pushed together — they come to represent lanes rather than boundaries of lane space.

But solid lines alone are often used to show possibilities rather than imperatives — for instance, they let drivers know about forks and crossroads, but provide no instruction about which path to take. Arrows add an element of movement and are found across the W4 series (and other sign sets) denoting both routes and directions.

Accordingly, the above redesign takes things a step further, dealing with figure-ground confusion while also adding an imperative for drivers. This design fluidly joins two routes with an arrow, providing an active indication of change beyond just a static set of solid lines. It also employs a thicker line weight found on other W4-series signs.

While by no means intended to be definitive or exhaustive, both of these alternatives share a simple advantage: they use existing conventions to generate a result more consistent with other signage.

Alternative A maintains a degree of continuity by keeping (but merging) the main lines of the original W4-2. Alternative B represents more of a visual departure, but may be a better fit for the W4 series as a whole.

It could also be argued, though, that each of these constitute too much of a change from the recognizable W4-2s currently on roads, both old and new. In a world of iterative design, familiarity is a factor as well.

Keeping visual continuity in mind, the nonstandard W4-2 variant above (spotted near downtown San Francisco) suggests one more potential vector for a redesign. In this case, the sign’s dashes are shortened to dots and the dotted line is shifted more toward the center.

In the alternative above (right), voids between the lines once again represent road space. But by pulling back and centering the dotted line, the lanes are given equal area on either side — and the dotted line clearly acts as a divider, not a path of travel. In alignment with both of its predecessors, the thicker solid lines are left in place for continuity.

In the end, any alternative would have to go through a rigorous testing process featuring driver surveys and real-world road trials. Each is also meant to represent a design direction more than a finished sign. Given those conditions, though, which route makes the most sense to you?

Update: the saga of this sign doesn’t end here – for more, including the poll results and other redesign ideas, click the link below:

Through the Motions: Japanese Rail Workers Point & Call to Promote

Free of Parking: Cities Have a Lot to Gain from Recycling Car-Centric

Cars are made to be driven, but they... [Read More]