There’s something about rebar that fascinates me. If nothing else because there are very few things that invoke a fear of being skewered. My preoccupation with metal reinforcement bars dovetails nicely with a structure in San Francisco I’ve kind of become obsessed with — a tiny bridge on the eastern edge of Golden Gate Park called the Alvord Lake Bridge.

Ernest Ransome, the father of modern rebar, constructed the bridge in 1889. Today, it is a dumpy, cracked, and neglected structure. The inside is a surreal tunnel of phony stalactites.

But the Alvord Lake Bridge is, quite literally, the bridge to the modern world. It is one of the oldest reinforced concrete structures still standing. The twisted iron bars embedded in the bridge served as the model for all the rebar containing structures that followed. It is the ancestor to an endless number of reinforced concrete buildings, bridges, tunnels, viaducts, and foundations. Ransome’s major innovation in rebar was to twist the square bar so that it bonded to the concrete better. 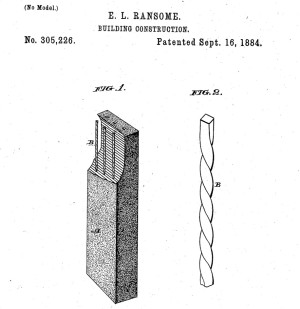 Concrete has incredible compression strength, but it does not have much tensile strength. So if you want concrete to span any significant distance, you need to embed metal reinforcement.

There are plenty of candidates for the most overlooked, most invisible part of the built world, but reinforced concrete has a good claim to being the most invisible of all. Because if it’s made right, you never see the steel skeleton underneath all the concrete structures that you work in, drive over, and walk under.

The problem with steel reinforcement is that it rusts. When the steel begins to rust, the bond with the surrounding concrete is broken. The rusted metal also swells and breaks the concrete apart. Because of this, most of the reinforced concrete structures that are constantly exposed to the elements (like our highway system) were only designed to last 50 years. More advanced concrete mixtures and epoxy coated rebar increase the longevity, but without regular maintenance, entropy eventually wins out.

Ernest Ransome left San Francisco soon after he completed the Alvord Lake Bridge. In his book “Reinforced Concrete Buildings” published in 1912, you can detect a tinge of bitterness in Ransome’s text as he describes how his twisted rebar was “laughed down” by the Technical Society in California. He left for the east thinking that his revolution of reinforced concrete would have a better chance out there. He left thinking that no one here would fully appreciate his Alvord Lake Bridge, his bridge to the modern world. And looking at it today, I’m sad to say, he was right.

Thanks to CCA Senior Adjunct Professor of Architecture, William Littman (he of the Forgotten Monument) for first telling me about the Alvord Lake Bridge and showing me around. I spoke with Robert Courland, author of Concrete Planet: The Strange and Fascinating Story of the World’s Most Common Man-Made Material (a great book!), and Bob Risser of the Concrete Reinforcing Steel Institute (a great person to talk to!).

A very special thanks to Bay Area architect and photographer Eddy Joaquim for shooting the bridge for the show. Eddy and his wife, Maile, are also the hosts of the truly excellent Big Tiny Salon, where I first talked about this story in May 2012.

Check the timed comments on the Soundcloud file for a list of the music used in this episode.

A Note From Roman

A Note From Roman

Previous Episode: An Architect’s Code
Next Episode: The Man of Tomorrow

Labors of Love: The Hidden Burdens of a Romantic “Love...

The popularity of “love locks” can be traced... [Read More]