For decades, Seattle planners have been exploring a radical overhaul where the city meets the Puget Sound, much of which has now been implemented. For humans, the surface experience has changed dramatically, but below, too, other species are benefiting from attention paid to the ecology of this important shoreline. Material decisions like transparent glass bricks might seem like a way to help people to observe fish below, but really: they are designed to serve salmon, lighting their way as they migrate through the water. 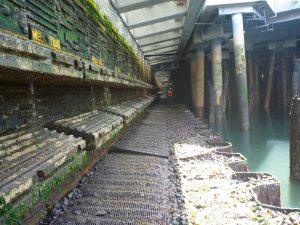 University of Washington reporter Michelle Ma describes this overall endeavor as “arguably the largest, most ambitious urban seawall project in the world that prioritizes habitat for young fish and the invertebrates they feed on.” The overarching key, in part, was to facilitate all of the desired human activities above while also paying close attention to the ecosystem below. Walls, steps, and other structures along the edge help provide scaffolding, creating habitats for the invertebrate animals and algae on which migrating salmon subsist. Mesh bags filled with rocks help foster biodiversity, allowing different species to find or make homes on or between them. Even the main seawall itself is cobbled to foster vertical growth. 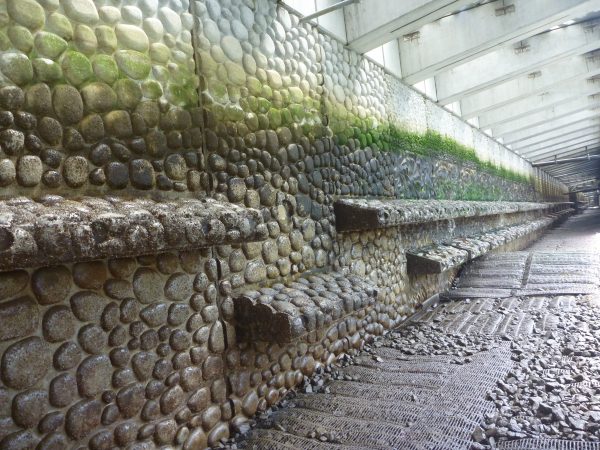 In the grand scheme, this project has to accommodate various creatures, plus rising water levels, all while protecting infrastructure from storm surges. Scientists at the UW, meanwhile, will be studying the efficacy of the endeavor and the specific strategies used within it in part to help other cities also looking to rethink their shorelines.

“Seattle’s downtown waterfront is an unprecedented attempt to improve fish habitat along an urban shoreline, so it’s a great opportunity to learn from and apply around the world,” Stuart Munsch, a fishery biologist at NOAA’s Northwest Fisheries Science Center, told Ma. Like the Living Breakwaters project in New York City, this project took lessons learned from nature about how to foster growth, replicating useful elements of natural ecosystems in artificial ways.

Special thinks to Brittany (@brrosenau) for the story tip!