If you heard that there was a piece of technology that could do away with traffic jams, make cities more equitable, and help us solve climate change, you might think about driverless cars, or hyperloops or any of the other new transportation technologies that get lots of hype these days. But there is a much older, much less sexy piece of machinery that could be the key to making our cities more sustainable, more liveable, and more fair: the humble bus. Steven Higashide is a transit expert, bus champion, and author of a new book called Better Buses Better Cities. And the central thesis of the book is that buses have the power to remake our cities for the better. But he says that if we want the bus to reach its potential, we’re going to have to make the experience riding one, a lot more pleasant. 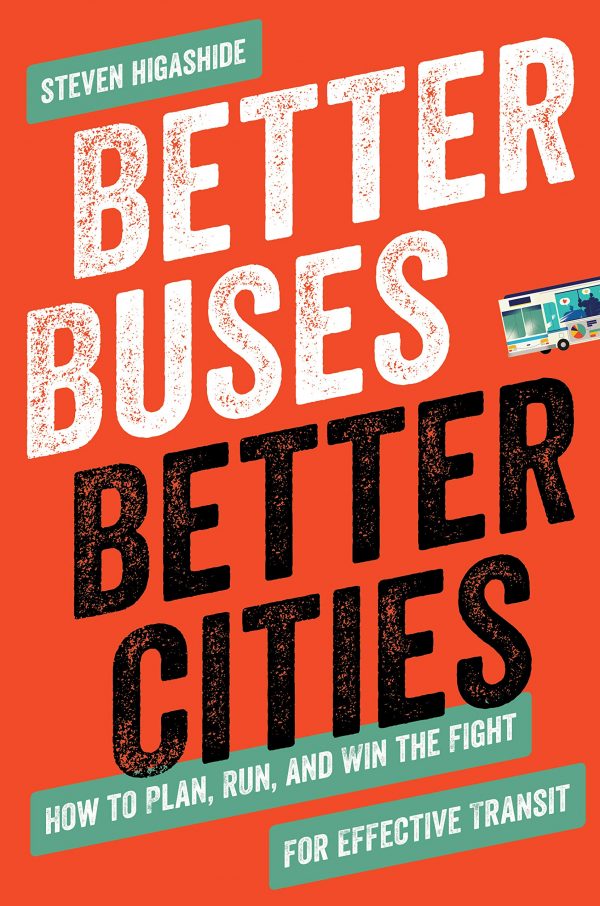 A Better Way To Travel

Americans take 4.7 billion trips a year on the bus, but many of those trips are miserable. They’re slow and circuitous, and the process of waiting for a bus in the hot sun can be horrible. And yet, the bus remains one of the most efficient ways to move people around cities. Transportation is now the largest contributor to greenhouse gas emissions in the U.S. This means we have to build cities and neighborhoods where people don’t have to drive as often and are able to make shorter trips. The bus can play a key role in making that happen.

The typical general-purpose lane of traffic in a city can carry around 1,000-2,000 people per hour. If you create a bus-only lane, that number jumps up to 4,000-8,000 per hour. If you give over more of the street to transit and create a transitway that goes up to 10,000-25,000 people per hour. Higashide says that in cities like London where planners have prioritized public transit, the fastest way to get around is often by bus. That’s rarely true in US cities.

It’s hard to know exactly why we haven’t embraced the bus in the United States, but Higashide thinks that part of it has to do with our obsession over new transportation technologies and the idea that we will somehow innovate our way out of traffic. For example, Elon Musk proposed a Hyperloop for Chicago that would carry 2,000 people an hour, which is actually much less than you can carry in a regular bus.

A lot of it also comes down to political power. Most people who ride buses in the U.S. today are lower-income and people of color. These are people who have always been, to a large extent, shut out of the political system. What it takes to make transit better involves organizing those riders and building a new kind of transportation politics.

In his book, Higashide writes about how in U.S. media, there’s this real class valence to buses. In the FX show, Atlanta, one of the early scenes is the main protagonist on the bus complaining that his life hasn’t gone the way that he wanted it to. We associate the bus with being down and out. When you look at popular media in Asia or Europe that’s just not true. There are a lot of scenes with buses that don’t seem to have any special significance because the bus is just part of the ordinary fabric of life and it doesn’t have some broader connotation.

One of the most fundamental things that you can do to make the bus better is just to make it run more frequently. In fact, there’s this saying that the transit planner Jarrett Walker often uses, which is that “frequency is freedom.” Imagine if you own a car and there’s a giant wall behind the car that only opens once an hour, and that’s the only time that you can leave your house and go driving. That’s basically what it’s like to live near an hourly bus route.  It’s only when you get to the stage where you have service every five to ten minutes that there’s this sense of freedom, that you don’t have to plan your life around the bus schedule. You can just show up whenever you want and feel confident that the bus is going to be there fairly soon.

Another way to make bus travel more desirable is to make it go faster! There’s quite a varied toolkit that cities and transit agencies have when they want to speed up the bus. For example, if the bus stop is in front of a traffic light, that is going to slow the bus down because it’s more likely that the bus is going to get caught by a red light. Whereas if you put the bus stop after the traffic light, that tends to be faster.

Another thing that makes a big difference is how far apart bus stops are from each other. You can even factor in how riders enter and exit the bus to save time. On busy routes, Higashide says that transit planners should do all-door boarding where you can get on at any door.

The biggest thing a city can do to speed up the bus is to separate the bus from traffic. You can do this with bus-only lanes along key routes, or even bus-only streets. In 2019 New York City closed off 14th street to private cars, giving busses the freedom to travel unimpeded. More recently San Francisco has done something similar on Market Street. Steven Higashide says that efforts like these are advertisements for what a city could look like when we prioritize transit over the private automobile.

A lot of times transit agencies look at survey data showing that people are worried about their personal safety on transit, which is a major reason why people don’t ride the bus. But when transit agencies see that safety is a concern, often they very quickly go to policing as the answer. More police on transit will make some riders feel safe, but it can also make riders feel less safe. Higashide says that cities don’t want to create an environment where people feel like by getting on transit, it could have implications for their immigration status or somehow lead to them being entangled in the criminal justice system. There are a lot of aspects to safety, including lighting station design and also human presence, which may or may not be law enforcement. These are the types of things where conversations have to happen at the community level—conversations about what “safety” looks like to that particular community.

When it comes to equity and transit, fares are really important. Lots of transit agencies actually allow for wealthier transit riders to pay less because there’s a discount for a monthly pass, whereas low-income riders can’t afford to pay for that monthly pass upfront. Instead, they’re paying much more than the cost of the monthly pass over time. A few transit agencies have started implementing a system called “fare capping,” where if you’re paying by the ride and you reach the level of a monthly pass, all your rides are free for the remainder of the month. Under this system, no one ends up paying more than the cost of a monthly pass.

Higashide thinks it’s really important to take a customer-focused approach when evaluating something like fare evasion. You have to confront the fact that in most places, it’s actually hard to pay for the bus. If you pay in cash on some systems, you have to pay via exact change. It can also be very unclear about where to buy a transit pass. When researchers looked at this in Washington, D.C., they found that the neighborhoods where rates of fare evasion were the highest were places where there was a lot of poverty and also no store where transit passes were sold. This shows us that if you criminalize fare evasion, to some extent, you are criminalizing poverty which isn’t equitable.

Steven Higashide says that we talk so much about technological innovation in transportation when the real innovation that is needed is innovation in governance or innovation in the public process so that we can build transit projects much more quickly. Something Higashide covers in his book is the unfortunate fact that a lot of bus lane projects are designed like a highway mega-project with multiple rounds of design and dozens of public meetings. You end up with a situation where it can take 6-10 years to put a bus lane on the street—which is much too long if we want our cities to be sustainable. There’s a lot of innovation that can happen in the public process to make these products happen more quickly. In fact, cities like Boston and Washington, D.C. are adopting something called “tactical transit,” where they will put some cones on the street or just paint the street and test out a bus lane and measure the actual performance and survey riders. This whole process takes maybe a few weeks or a few months instead of multiple years. One of the great advantages of the bus is that it is quite flexible as a design solution.

If cities want to become more sustainable and more equitable, they have all the tools they need today to prioritize transit and to make it a great service for people. Higashide believes there’s a secret reason why a lot of people in the transportation space focus on technological innovation, and it’s because they’re shying away from their own responsibility and they’re hoping that the private market is going to solve the problem. But what private transportation companies have given us are boutique services for the well-off. What cities actually need is affordable, widespread transit, which requires public champions.

Houston, We Have a Solution

The typical way that bus routes change is incremental—with a tweak here and there—which adds up over the years sometimes into these routes that squiggle all over the place. But Houston, TX recently took a much more radical approach by designing its network from scratch. Transit officials realized that the bus network had become less and less relevant to people in the community over the decades, so it wasn’t really something that was worth building on. Instead, they took into consideration how demographics are changing in Houston, and where the job centers are in Houston today and in the future. What would that system look like? The result was a whole new transit map that put a million additional jobs and a million additional households within walking distance of frequent transit. 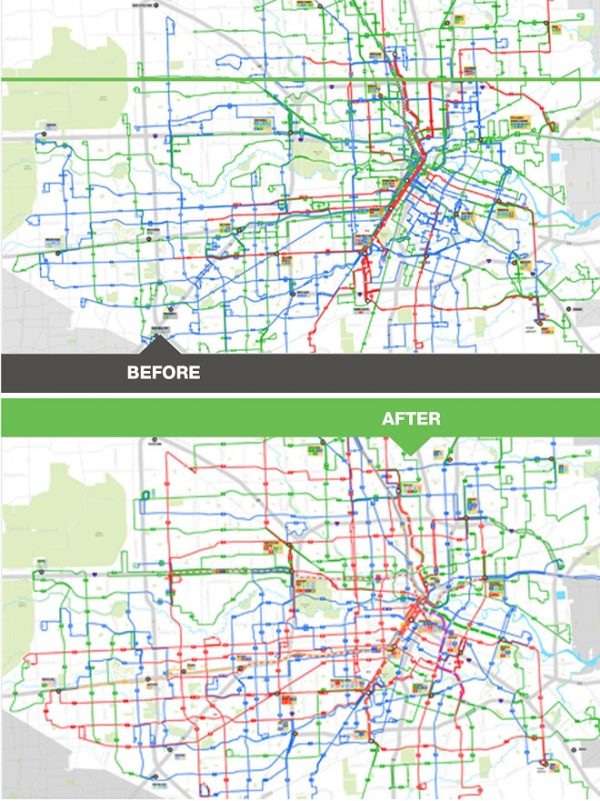 Steven Higashide thinks that when it comes to improving transit we have to be open to changes that might seem radical. “I don’t think it’s radical at all to call for tripling or even quadrupling the amount of bus service that we provide in most cities,” he says. “I think the experience elsewhere shows that we could do that and people would use it.”

Previous Episode: The Worst Video Game Ever
Next Episode: Whomst Among Us Let The Dogs Out

Labors of Love: The Hidden Burdens of a Romantic “Love...

The popularity of “love locks” can be traced... [Read More]

All over London, upcycled stretchers from World War... [Read More]