For most people, Dubai conjures images of the world’s tallest skyscraper and the various other sleek modern structures that have redefined its skyline in recent decades.

But trek to other parts of town and the aesthetic changes: glass and steel give way to mud and stone, and hermetically-sealed environments are replaced by ancient techniques for naturally cooling buildings.

A windcatcher is a traditional Persian architectural element found across the Middle East, its use dating back thousands of years. The “windcatcher” moniker comes from their ability to catch passing winds and drive them down into buildings below. Typically jutting up above occupied structures, these towers serve various functions. 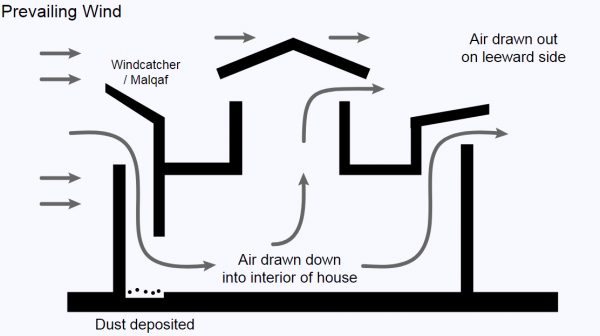 Windcatchers provide passive ventilation for indoor spaces. They can also facilitate evaporative cooling with the help of water reservoirs inside buildings. Sometimes, they are pointed into the wind to catch more air. In other cases, they face away from potential sandstorms.

Four-directional windcatchers can be seen all around Dubai. They often have wooden sticks protruding from their sides, used to mount cloth and more effectively redirect airflow. Even when there is no wind, the towers function as solar chimneys, allowing hot air to escape upwards.

Some are still very much in use, particularly in historical parts of the city, but the architectural language of windcatchers can also be found abstracted and attached to buildings as a kind of ornamentation.

In the mixed-use structures above, for instance, the general form remains but voids for catching wind are filled in. And in newer parts of town, windcatcher-like turrets are commonly found on larger mansions where they serve a similarly aesthetic purpose.

Meanwhile, in hot desert regions in and beyond the United Arab Emirates, other architectural solutions have long been employed in conjunction with windcatchers. Buildings are often packed tightly together not for lack of space but to maximize shade on the ground. Thick ceramic or adobe walls take advantage of local building materials but also help to increase insulation values and keep interiors cool.

Other passive cooling can even be found in some newer and taller structures as well, like the “Swiss Cheese” building above. Here, a fairly conventional glass-and-steel structure is wrapped in a perforated shell, framing views of the city while also offering a degree of shade.