In downtown Windhoek, Namibia — at the intersection of Fidel Castro Street and Robert Mugabe Avenue — there’s an imposing gold building with an affectionate nickname: the Coffee Maker. This notable structure was built to commemorate Namibia’s fight for independence from apartheid South Africa, which it achieved in 1990. And for many of the visitors, the museum feels like a huge achievement. But for a museum that commemorates throwing off the chains of colonialism and forging a new era of self-determination, it has one pretty strange feature. It wasn’t designed by a Namibian architect. It wasn’t even designed by an African architect. It was built by North Korea’s state-run design studio, which has long been a prolific maker of statues around the world.

North Korea has left a distinct visual stamp across Africa in particular, with museums and monuments erected in more than a dozen African countries since the 1970s. There’s the African Renaissance statue in Dakar, Senegal, which is taller than the Statue of Liberty and shows a family reaching triumphantly towards the sky. There’s a futuristic mausoleum to the first president of Angola that’s so space age it’s known locally as “Sputnik.” And in the Democratic Republic of Congo, there’s a huge statue of former president Laurent Kabila. It stands on a base whose text just says NATIONAL HERO (all caps).

Before World War II, Korea was a Japanese colony. After the war, the Allies took over the peninsula, and divided it in two. It became one of the fronts of the Cold War. North Korea was backed by the Soviet Union and South Korea was occupied by the U.S. Each country saw itself as the rightful ruler of the entire peninsula. Each was competing to stake its claim, and find allies around the world. African nations, for their part, were seeking non-Colonialist alliances. And what North Korea was offering to its potential freedom-fighting African allies was a kind of independence starter kit. It was everything you’d need to build a country like they had, from military training and weapons, to factories and agricultural projects, and (eventually) the statues and monuments you’d need to celebrate your triumph over colonialism.

North Korea’s leader, Kim Il Sung, knew the crucial role that architecture and design could play in building a new nation. In North Korea, he had made the built landscape into a kind of giant, open-air history lesson. There were murals, statues, and reliefs everywhere, in public squares and train stations. All that public art reinforced the story of the country’s triumph over imperialism – and, of course, the glorious leader who led that fight. The epicenter for this kind of art in North Korea, was a massive design studio located in Pyongyang. It was called Mansudae. The studio was founded in 1959 – and it was part artist’s colony, part factory, and all propaganda machine. Among Mansudae’s greatest hits  were a 65-foot tall bronze statue of Kim himself, and a series of huge mosaics of the Great Leader displayed in Pyongyang’s metro stations. In one, he is literally the sun, shining down over an imagined reunification of North and South Korea.

These monuments were all done in a style called ‘socialist realism.’ It’s an artistic genre that started in the Soviet Union and was perfected in the Cold War communist world. And despite the name, it’s not really about representing reality. It’s more about utopia – reality as you, or your government, would like it to be. Think Russian peasants striding joyfully through a sun dappled wheat field. Or Chairman Mao surrounded by a crowd of happy Chinese factory workers. North Korean artists became masters of the form. And artists, in turn, became a revered part of North Korean society. For over a decade, Mansudae had focused on creating work for the Great Leader, and in the process became a state-sponsored arts behemoth. It would eventually become a massive campus, with more than 1,000 working artists, and its own soccer stadium, clinic, paper mill, and kindergarten. Most of the country’s best artists ended up here. And in the 1970s, they started to produce more and more works for countries, including African nations.

This monument diplomacy was well received, especially because it was subsidized – from start to finish – by the North Korean government. Mansudae artists and architects designed these works in Pyongyang, and then constructed them on-site with their own crew of workers – all without the recipient country lifting a finger. But just as North Korea’s statue exports were picking up, its fortunes as a country were plummeting. In the 1980s, the country’s economy began to crash. South Korea was already pulling ahead when the North was dealt a near-fatal blow when the Soviet Union fell and the Cold War ended. In the process, North Korea lost its main sponsor and supporter. The North Koreans had talked a big game about self-sufficiency, but the reality was that the country had always relied heavily on Soviet aid. And without it, they fell into a crisis. Although the North Korean government refused most outside help, it was desperate for hard currency. And one of its few remaining exports, one of its last points of connection with the outside world, were its giant statues.

Meanwhile, in 1990, Namibia finally negotiated its independence after more than a century of struggle under German and then South African rule. One of the leaders of its guerilla movement, Sam Nujoma, became the first president. But as with any country born out of a long struggle, Nujoma and other Namibian leaders faced a massive challenge in uniting people behind a new story about the nation. The history Namibians had received from their colonizers taught them every single day that they were inferior and uncivilized — a people without history of their own worth celebrating. The Namibian government decided it was time to tell a new story, one centered on liberation. 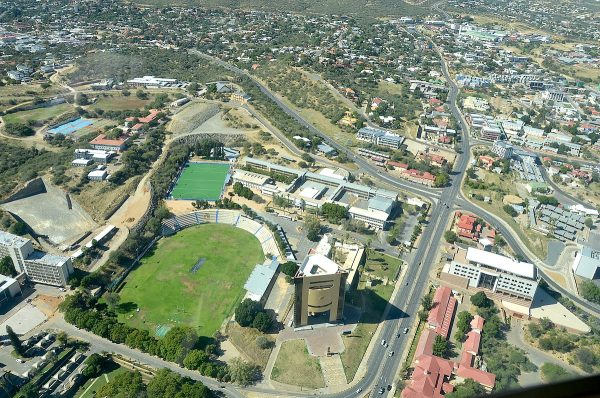 In 2001, Namibia’s cabinet approved a plan to build a museum on the site of one of those colonial monuments. It was a deeply controversial statue of a German soldier called The Riderdenkmal. The site had also been a concentration camp where Namibians were held by Germans in the early 1900s. And so the location of the new museum was symbolic. After considering a range of designs, the Namibian government chose North Korea’s Mansudae to build the Independence Museum. The choice was in many ways a strange one. The new Namibia wasn’t a socialist dictatorship. It was a democracy. Its views on the world seemed almost diametrically opposed to those of North Korea. But North Korea was also an old friend. During the Cold War, when many countries in the West, including the U.S., had worked against Namibian independence, North Korea had supported them. And in the new Namibia, Mansudae had already built a number of projects, including a memorial to heroes of the liberation struggle, a new presidential palace, a munitions factory, and a military museum. 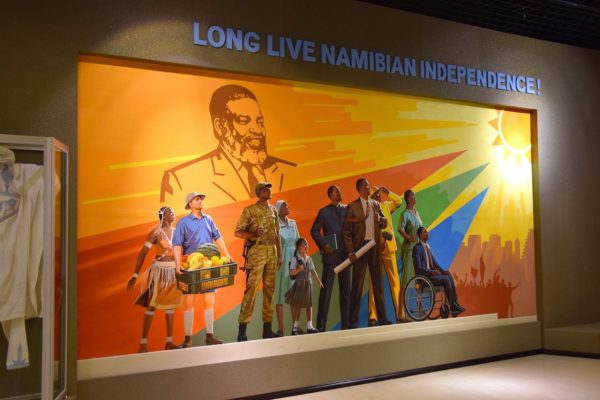 But less than a decade after opening, the museum is already starting to show signs of wear. Tiles are falling off the facade. The TV screens in many of the exhibits aren’t working. And more people have started to ask questions about the building’s provenance. North Korea is widely recognized as a country under a brutal and oppressive regime. In 2017, Mansudae Overseas Projects was one of four North Korean state-owned companies sanctioned by the UN. The intention was to deter North Korea from further expanding its nuclear weapons program. That largely ended Mansudae’s reign as purveyors of socialist realist art around the world. And beyond that, there’s a new generation of Namibians asking why such an important national institution wasn’t built with more Namibian involvement.

One of the most important differences between putting up this kind of art and design in North Korea and putting it up in Namibia is that, in a democratic society, people can decide what the art means to them. They can interact with it in ways that challenge its meaning. It’s almost impossible to imagine ordinary North Koreans being free to stage protests at the site of a towering Kim Jung Il statue. But the equivalent IS happening in Namibia. The independence museum might be steering people towards one version of the past. But conversations are also swirling around it, adding new layers to that meaning all the time.