Stories inspired by two people from the world of architecture and design we’ve lost due to COVID.

No matter which James Bond actor is your favorite, it’s undeniable that the Sean Connery films had the best villains. There’s Blofeld, who turned cat-stroking into a thing that super-villains do, and then there’s Goldfinger—Bond’s flashiest nemesis. Fun fact: the author of the James Bond books, Ian Fleming, named Goldfinger for a real person—an architect by the name of Ernő Goldfinger, who made giant, hulking, austere concrete buildings. Fleming disliked these buildings so intensely that he immortalized their architect as a villain in pop culture.

This divide—this hatred from the public and love from designers and architects, tends to be the narrative around buildings like Goldfinger’s. Which is to say, gigantic, imposing buildings made of concrete.

Some people refer to this building style as “Brutalist architecture,” but Brutalism is a big, broad label that’s used inconsistently in architecture, and architects tend to disagree on a precise definition of the word. Furthermore, the word “brutalism” has intense connotations, even though it’s not actually related to “brutality.” The word comes from the French “béton brut,” which means raw concrete.

Lots of folks, beyond the creator of James Bond, love to hate these concrete buildings. Their aesthetic can conjure up associations with bomb shelters, Soviet-era, or “third-world” construction, but as harsh as it looks, concrete is an utterly optimistic building material.

Around the 1920s, concrete was seen as being the material that would change the world.  The material seemed boundless—readily available in vast quantities, and concrete sprang up everywhere—on bridges, tunnels, highways, sidewalks, and of course, massive buildings. Concrete has become the second-most consumed product in the world. The only thing we consume more of than concrete is water.

Concrete presented the most efficient way to house huge numbers of people, and government programs all over the world loved it—particularly Soviet Russia, but also later in Europe and North America.

Philosophically, concrete was seen as humble, capable, and honest—exposed in all its rough glory, not hiding behind any paint or layers. Concrete structures were erected all over the world as housing projects, courthouses, schools, churches, hospitals—and city halls.

In the late 1950s and early 60s, Boston was plagued by a loss of manufacturing jobs and white flight to the suburbs. For decades the Massachusetts capital had the highest property taxes in the nation and almost no new development. So Boston set an agenda to make the city great again by erecting big, soaring, modern buildings made of concrete. And, though some of these buildings were celebrated, others were despised.

When Boston City Hall was built in 1968, critics were put off by the concrete style. It was called “alienating” and “cold.” And since it was a government building, this criticism became impossible to remove from politics. Boston City Hall became a political pawn as mayors and city council members vied for public support with promises to tear it down.

But tearing down Boston City Hall has never come to pass. Doing so would take an incredible amount of effort and money. And so, government officials have largely chosen to ignore the building. This “active neglect” happens with a lot of concrete buildings—they are intentionally unrenovated and uncared for which only makes the building more ugly, and then more hated, and then more ignored. It’s a vicious cycle wherein the public hate of a building feeds itself.

When people built these mammoth concrete structures, no one really thought about maintenance, because they seemed indestructible. In the early days of concrete people assumed it was an everlasting material that wouldn’t require any further attention. This has not proven true. But, it can be hard to tell when concrete needs repairing since its decay is not visible on the surface.

Concrete deteriorates chemically, from the inside out. Part of this has to do with the metal rebar reinforcements that help to hold up most concrete buildings. The rebar can rust, and this degradation can lead the concrete to fracture.

But despite their unpopularity, tearing down these concrete structures is probably not the answer. The process is costly and wasteful. We can adapt these buildings to make them greener, more appealing places to be. And the best way to break the cycle of active neglect may be to love these concrete brutes in all their hulking glory. As with any art form—whether opera or painting or literature—the more you know about it the more you appreciate it. This is especially true of concrete buildings.

Architecture students appreciate them because they know that concrete requires a great deal of skill and finesse to work with. Every little detail has to be calculated out in advance because once the concrete is poured, there’s no going back to make adjustments.

Aside from the interesting design challenges concrete poses, the material itself can be subtly beautiful.

We call the city a “concrete jungle” to talk about the artificiality of the urban landscape, but concrete can actually be a very natural expression of the environment. What we think of as a homogenous texture is actually rich and diverse, when you consider it closely.

Concrete’s color and texture can be dictated by local climate, local earth, and local rock. Concrete can also be an expression of local style and custom. For example, British concrete has big, thick textured chunks of rock, while Japanese concrete is fine and smooth.

But the beauty of concrete architecture might be the most apparent when you can observe the buildings like pieces of sculpture—without having to actually live and work in them which brings in concrete’s surprising ally—photography.

Concrete looks good in photographs. It provides a neutral background to bring out people’s skin tones, or the color of their clothing. Fashion photographers discovered this first, but in recent years, pockets of the internet started to appreciate these concrete buildings.

Photography is allowing a new audience to appreciate these buildings for their strong lines, their crisp shadows, and increasingly, the idealism they embody.

In the words of Adrian Forty, author of Concrete and Culture:

[Concrete buildings] represent a set of ideas about the state of the world and what the future was imagined to be that we want to preserve. We should remember what people were thinking 50 years ago. If we tear these buildings down, we will lose all of that.

Back in the 1960s, Victorian-style buildings were considered hideous and impossible to repair. We were tearing batches of Victorians down to erect big concrete buildings. But some Victorians were saved—and today, some of them are considered treasures.

Concrete architecture now finds itself at an inflection point: too outdated to be modern, too young to be classic. And a small but growing band of architects, architecture enthusiasts, and preservationists would like us to just wait a bit and see.

Maybe, with a little time, we’ll come around to love these hulking concrete brutes.

We’ve lost quite a few people in the design world since the beginning of the pandemic due to COVID-19. One of them was Michael McKinnell, co-designer of Boston’s Brutalist City Hall, and another voice who is gone too early was Michael Sorkin. Sorkin was an architect and the Village Voice architecture critic in the 80s. He brought a totally new kind of approach to writing about buildings, one that focused on people and politics.

We spoke with design critic at Curbed, Alexandra Lange, about Sorkin’s work, and Roman Mars reads excerpts from one of his works called Two Hundred and Fifty Things an Architect Should Know. 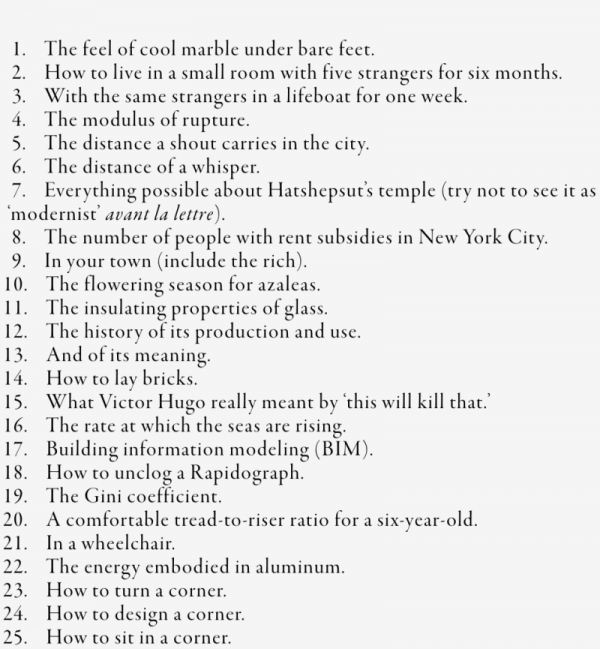 Previous Episode: Masking for a Friend
Next Episode: The Natural Experiment

Imagine being able to plant things in your... [Read More]