Large retail stores have historically been places where architects play it safe, sticking to big bare boxes with simple and familiar aesthetics. But in the 1970s, Best Products and architects of SITE (Sculpture in the Environment) began to deconstruct the idea of the big box store in ambitiously literal ways. Together, they deployed a series of incredible structures that would become ironic (if unintended) icons of postmodern architecture.

Best Products (or: BEST) started out as a catalog retailer in the 1950s. They sold general consumer goods – the kinds of things one would expect to find at Sears, Walmart or Kmart. While building a commercial empire, however, BEST founder Sydney Lewis also developed a passion for art that would shape his approach to the company’s architecture.

So when BEST set out to construct a series of showrooms in the 1970s, its founders approached James Wines of SITE. Wines was an artist and sculptor, part of a movement interested in getting art out of galleries and into the built environment.

“Wines saw the buildings as an exploration of the boundary between art and architecture,” writes David Douglass-Jaimes of Archdaily, “and working from the starting point of the ubiquitous and familiar big box store archetype provided even greater freedom to blur the line.” 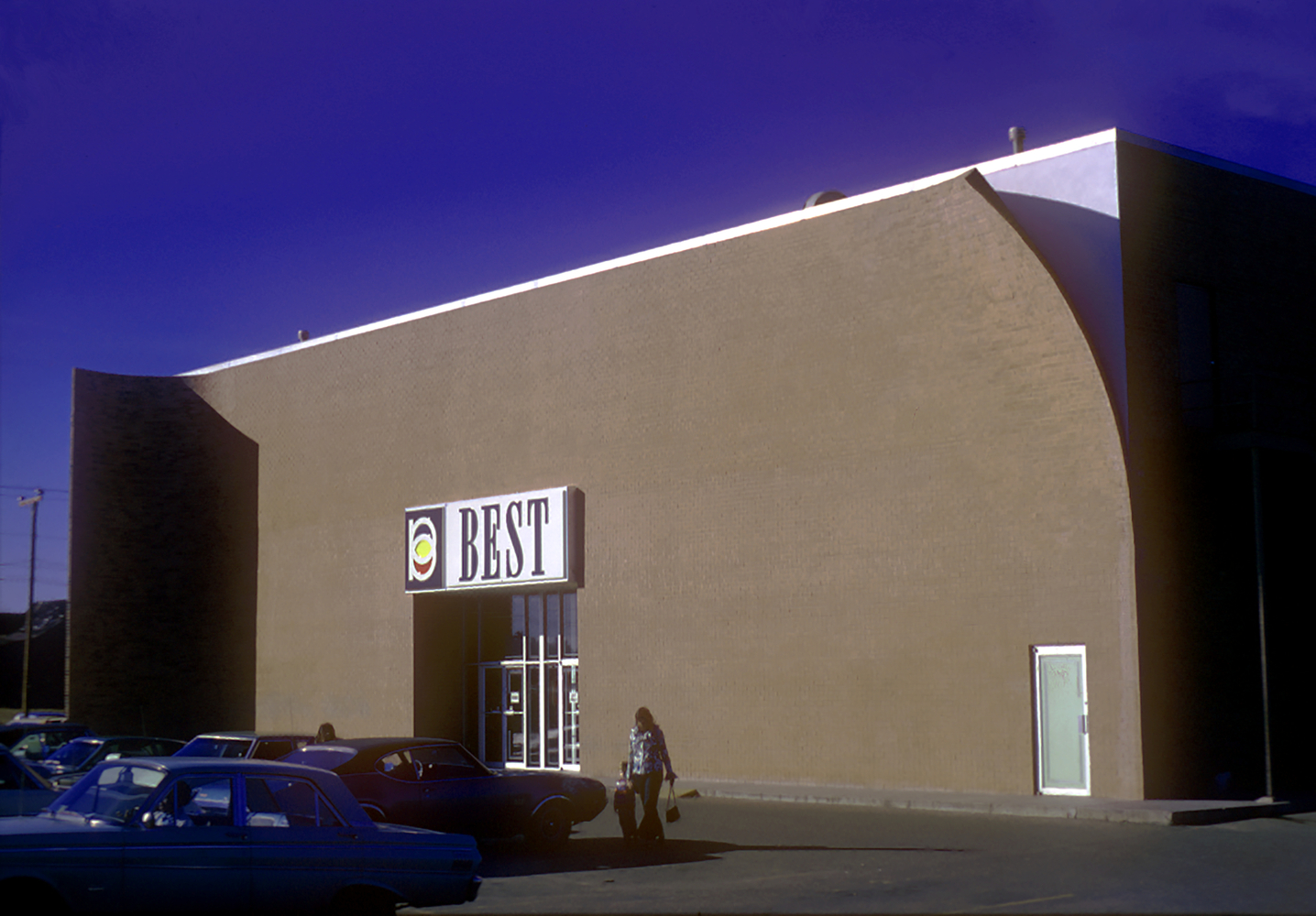 The Peeling Building in Richmond, Virginia, was the first collaboration between BEST and SITE. In hindsight, it seems modest in the face of their subsequent work. Parts of the brick facade were peeled to reveal a blank box behind, an implicit commentary on big box genericism. 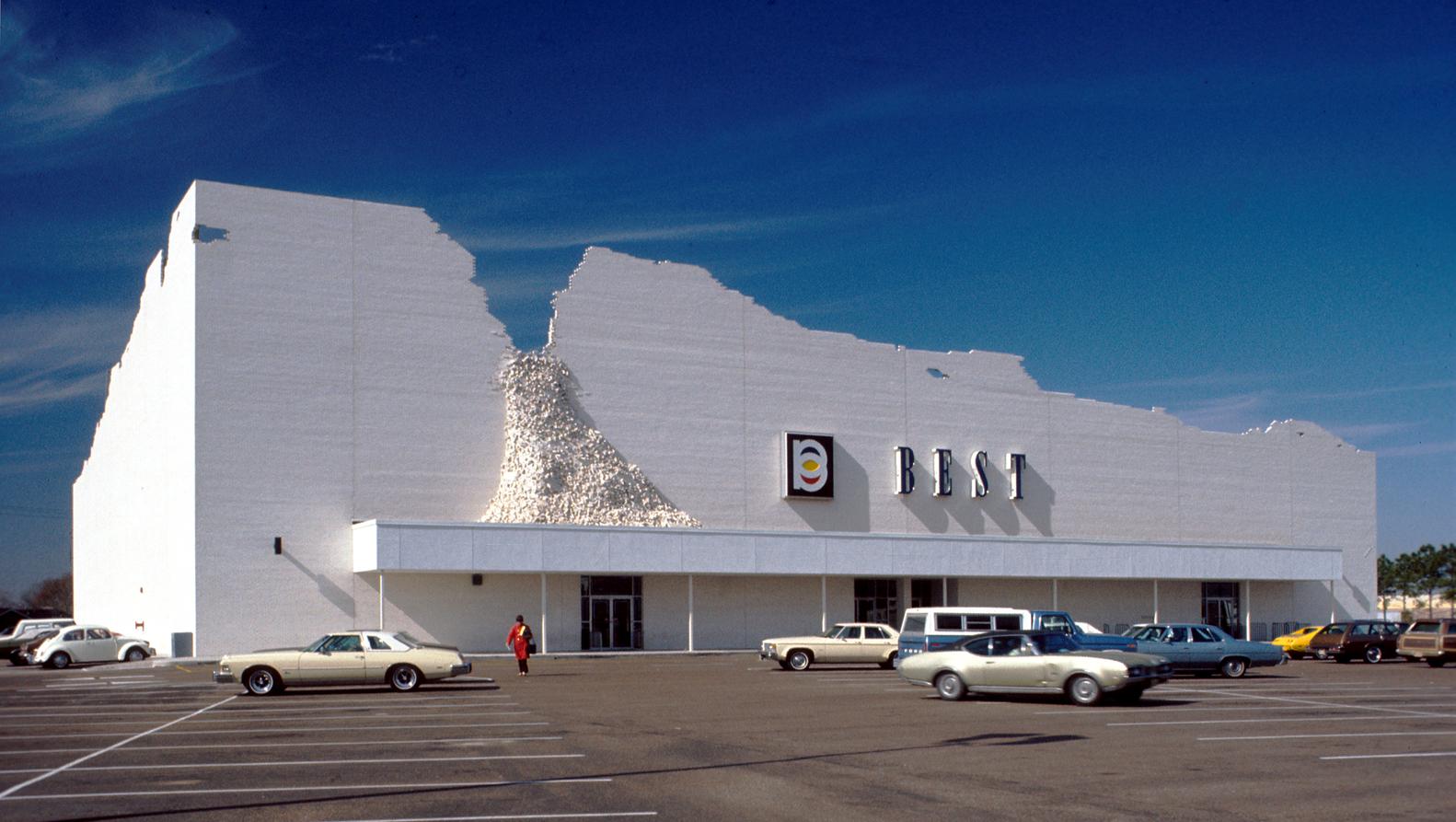 Subsequent structures by SITE carried similar themes forward in expressive ways. Indeterminate Facade in Houston, Texas featured a crumbling brick front that spills onto an entryway overhang. One can start to read into this a thematic critique of mass-market consumerism. 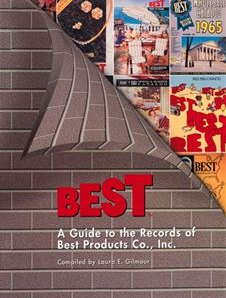 According to Douglass-Jaimes, Wines’ artistic contemporaries “envied his freedom to create works that, in their exploration of decay, neglect, and artificiality, so obviously critiqued the throwaway nature of American consumer culture.” Ironically, of course, this was the very source of his clients’ business success.

The BEST company even integrated its architectural approach into catalogs, featuring covers that borrowed directly from its buildings. In many ways, the architecture served a larger rebranding initiative, setting BEST apart from its competitors. With SITE, they kept thinking outside the box and continued to experiment with increasingly elaborate facades. 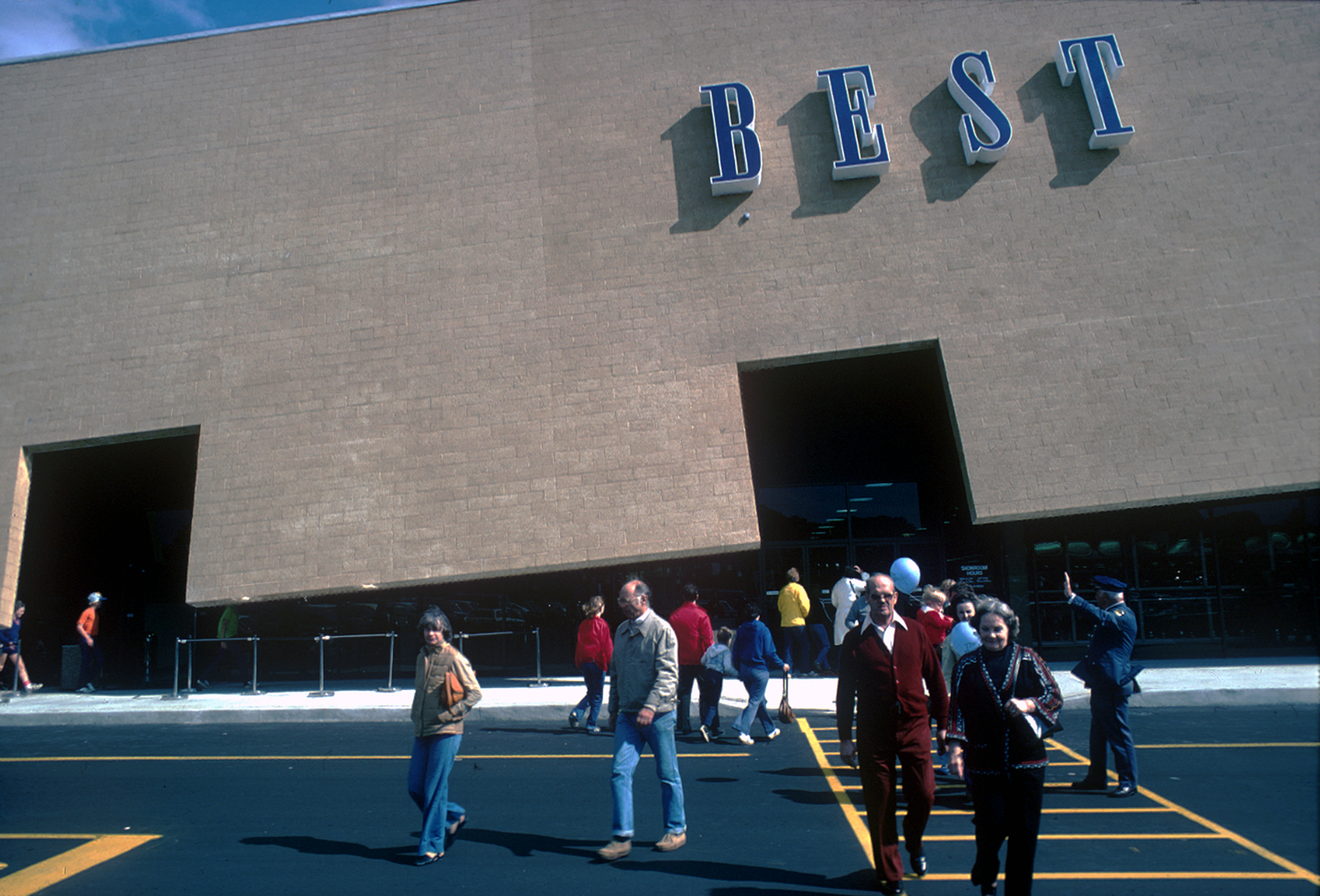 The facade of the Tilt Building in Towson, Maryland was physically lifted off of the ground and seemingly supported on a single point. It was an incredible work of structural engineering, and something bound to catch the eye of anyone passing by on adjacent roadways. 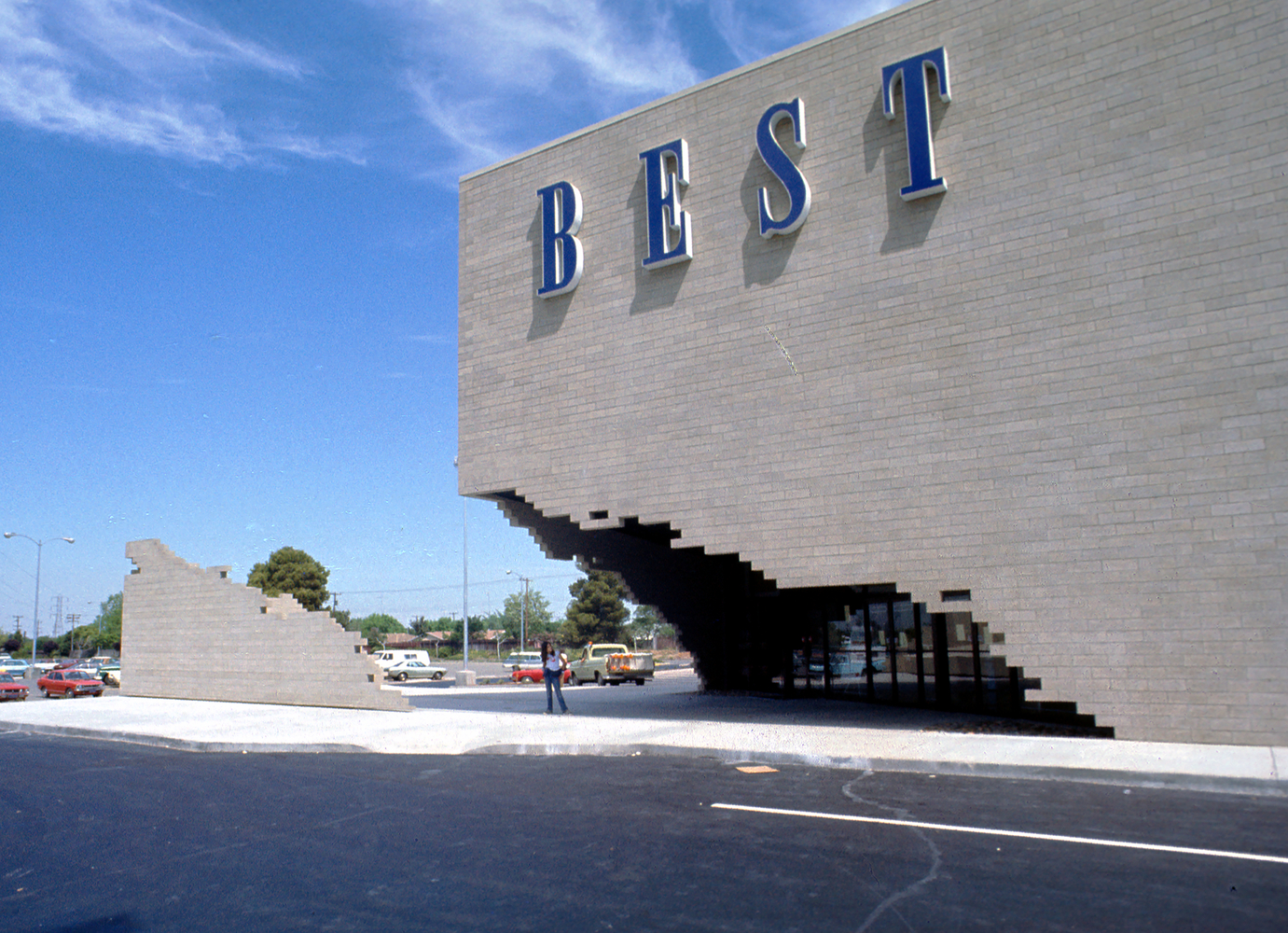 The Notch Building in Sacramento, California added an audacious feat of mechanical engineering to the mix. Whenever the store opened for business, the corner of the box would break away from the main structure and slide out to reveal an entrance.

The BEST Anti-Sign outlet in Richmond, Virginia, played on themes of motion and scale, presenting a blur to passing motorists. Robert Venturi fans will recognize this approach from Las Vegas. 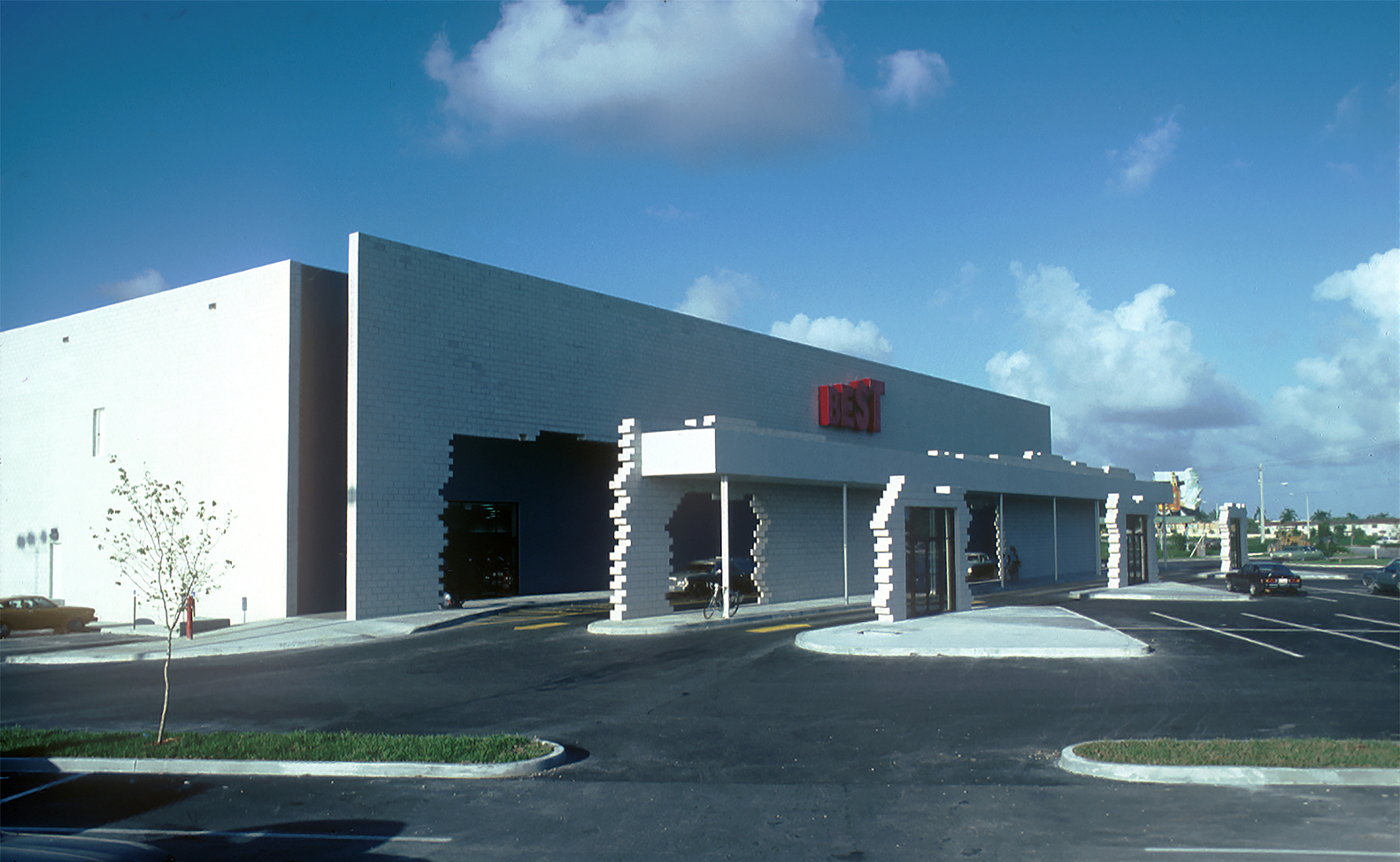 The Cutler Ridge Building in Miami, Florida, breaks down the barrier between interior shopping space and exterior parking spots. The broken-brick facade pushes out and jumps lanes to bridge the gap.

Additional buildings created by SITE for BEST through the 1980s explored themes of consumerist critique and physical deconstruction in various ways, but their final collaboration was perhaps the most revealing. For the Inside/Outside Building in Milwaukee, Wisconsin, entire sections of the exterior were stripped away to reveal inner workings, slicing through mechanical systems and display items. 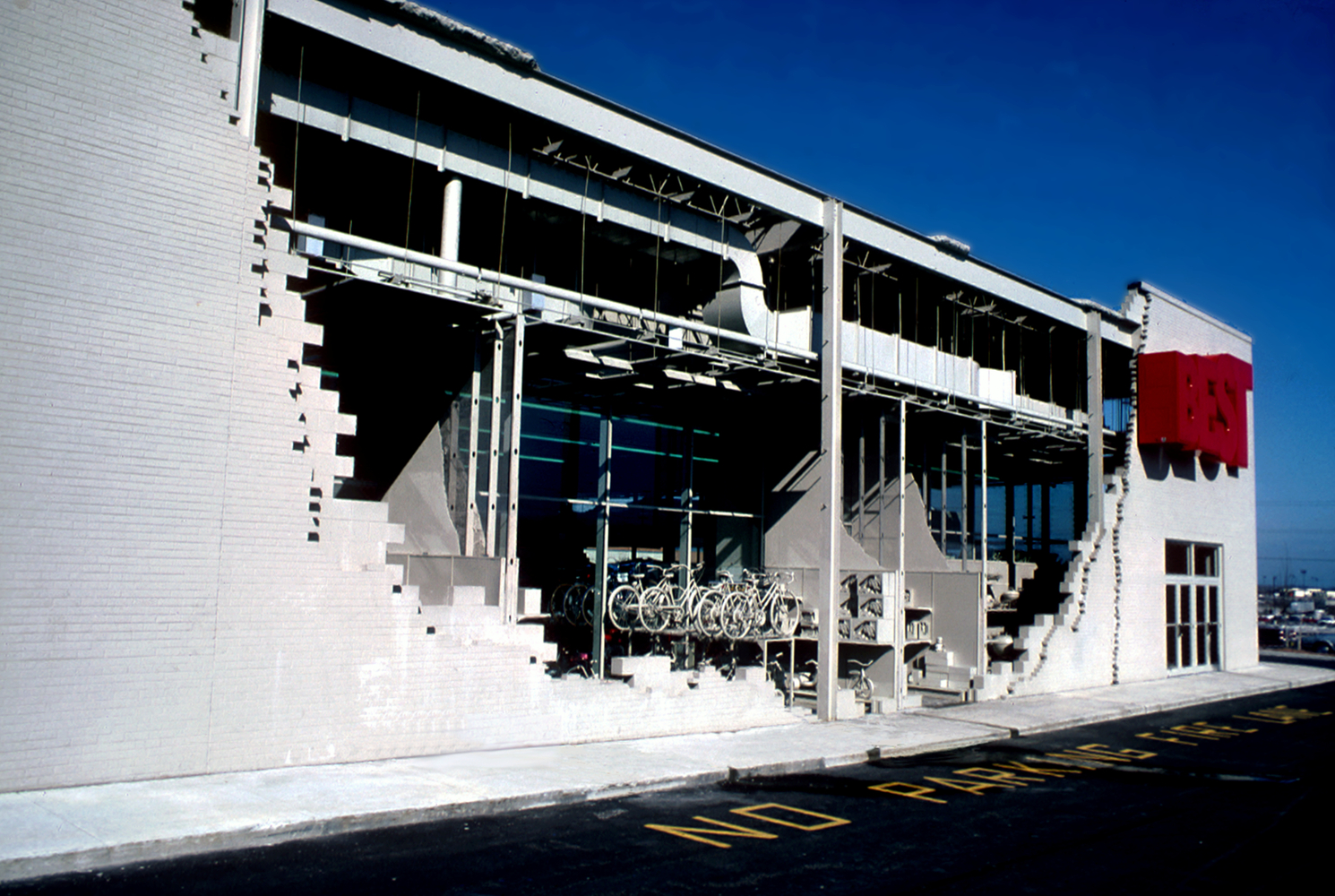 BEST was successful for a time but began to wind down in the face of competition from other retailers and, eventually, the internet. When BEST was liquidated in the late 1990s, its crumbling building facades began to fall apart for real. Some locations were stripped, converted and reused while others were outright demolished.

In a Metropolis article, Stephen Fox of Rice University highlights a lack of enthusiasm for preserving abandoned big box stores, including the BEST ones: “The building’s preservation has depended on its function as a big box store. The facade has not figured in at all. There’s not much sentiment here for preserving suburban landmarks.”

Whether generically or creatively designed, most architects find big boxes all too easy to critique and ignore. “The typology of the big box store is familiar to any architecture student as the knee jerk embodiment of soulless merchandising against a flat landscape,” notes designer and architectural critic Margaret McCormick. “As architectural thought and rhetoric grows increasingly urban … these kinds of buildings represent everything backward and wrong to young designers.”

McCormick suggests that people fail to view big boxes as authentic, and thus see them as “worthy of contempt and irony.” However, she points out, “authenticity is a quality that is most appealing to the privileged.” It leads people to “look down not only on the architecture, but also its users. Big box stores may never have been glamorous but they were practical and, for a while, extremely successful.”

Today, the audacious BEST showrooms continue to be debated, praised and criticized in design circles. Some see them as the epitome of Postmodernism while others condemn them as consumerist gimmicks. All sides seem to agree on at least one thing, though: these buildings may be gone but they will not be forgotten anytime soon.