On April 21st, 1859, an incredible thing happened in London and thousands of people came out to celebrate it. Women wore their finest clothing. Men were in suits and top hats, and children clamored to get a glimpse…of the very first public drinking fountain.

The fountain was used by thousands of people a day. And to understand its mass appeal, you have to understand that city life in London was a nightmare for the poorer classes in the 19th century, and a big part of that nightmare was the drinking water. Most people did not have access to water in their homes. Instead, many got their water from the nasty cesspool known as The River Thames. The Thames was essentially a common sewer — full of feces and chemicals.

Those that did not get their water directly from the Thames often got it from wells that were dirty and contaminated with disease. 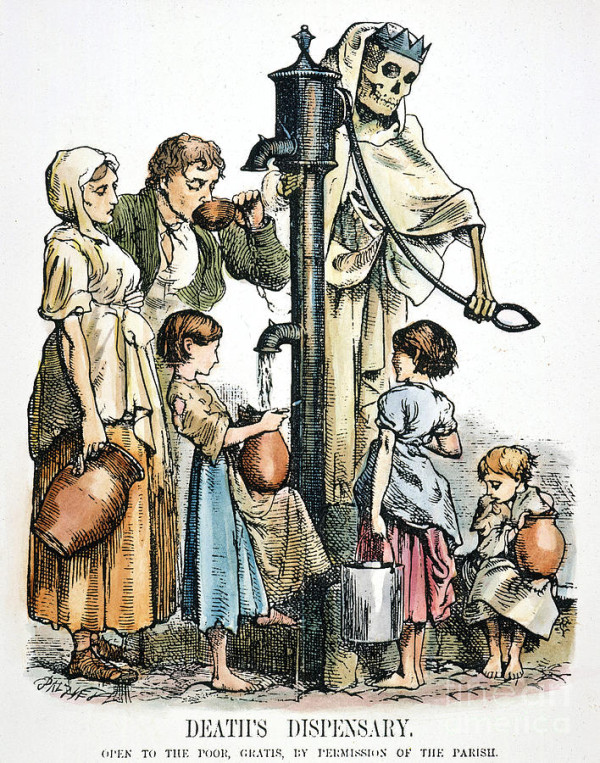 Cholera was rampant. Outbreaks of the disease in 1847 and 1854 killed 58,000 people in London, and the accepted theory at the time was that diseases, including Cholera, were spread through bad-smelling air. But some people were skeptical of this, including a scientist named John Snow.

Snow thought that Cholera might be spread through drinking-water. He created a map of Cholera sufferers and tied a particularly brutal outbreak to one water well. He then went and removed the pump handle at that well so that people couldn’t access the water, and the epidemic in that neighborhood ended. Snow subsequently became known as the father of modern epidemiology.

Shortly after Snow’s discovery, The Metropolitan Free Drinking Fountain and Cattle Trough Association was formed.  By 1879, The Association, which was made up of wealthy, mostly Christian philanthropists, had built almost 800 drinking fountains in London. The group had a couple different agendas in building drinking fountains: clean, safe drinking water for poor people and temperance.

The temperance movement — a social movement that opposed the consumption of alcohol — was an early supporter of this new beverage called “water.” There was a terrible epidemic of alcoholism at the time, both in London and in the United States. Alcoholism was destroying families, but until there was clean, safe drinking water, the temperance movement didn’t have an alternative to offer people in place of booze. Coffee and tea were expense, milk was for babies and many people drank alcoholic beverages simply by default.

Temperance fountains were constructed at churches and in public parks, and often, right outside the local pub. The architectural style of these fountains varied greatly depending on who commissioned them, but they weren’t like the drinking fountains you grew up with. They were generally made of stone or granite and some were elaborate structures — not just drinking fountains, but symbols of philanthropy.  In the late 1800s and early 1900s, temperance fountains were constructed all over London and in the United States.

While drinking fountains were a huge step forward for public health, their design still posed problems. For one thing, early fountains were generally used via a common cup. It was actually a pretty big battle to get rid of the common cup. Public health officials knew it was spreading disease, but people weren’t in the habit of carrying their own cup. Passed in 1912, the first federal regulation on drinking water in the United States banned the common cup at public fountains.

Meanwhile, a drinking fountain was designed didn’t require a cup. It was similar to the drinking fountains we use now, the difference being that the water came out in a vertical jet that shot straight up (the drinker’s backwash fell straight back down onto the spout.) Furthermore, many drinkers were found placing their lips directly on the spout, again creating a health hazard.

Finally, the drinking fountain we all know today was developed — one that created an arced stream and included a guard to keep people from placing their lips directly on the spout.

For a lot of Americans, the public drinking fountain conjures an image that has nothing to do with the arced jet, or the common cup, or with temperance — it’s an image of segregation. All over the Jim Crow era South, drinking fountains and public pools were separated. The Civil Rights Act of 1964 ended segregated public facilities including drinking fountains, although a handful hung on in the south for a few more years.

Even with that darkest period of the drinking fountain’s history over,  it’s never really been as beloved as it was when they opened the first one in London in 1859.  Recently public drinking fountains have met their most formidable opponent: bottled water.

There is some evidence to suggest that bottled water is enabling a shift away from the public drinking fountain. In 2007, the University of Central Florida opened a brand new football stadium with no public water fountains. On opening day, 45,000 people showed up to watch the UCF Knights play the Texas Longhorns. It was an incredibly hot day and the bottled water sold out quickly. By the end of the game, 18 people had been taken to the hospital for heat-related illnesses.  In the aftermath, a group of concerned students organized into a group called The Knights for Free Water. They demanded that drinking fountains be installed in the stadium. Their demands were met and the stadium was retrofit accordingly.

There are small movements happening to restore the public drinking fountain to its former glory. For example, a design group in New York called Pilot Projects is hoping to install 100 new drinking fountains in the city.  They’re still trying to convince the city to partner with them on the project.

The podcast of this story also includes an episode of Song Exploder in which Hrishikesh Hirway talks to Merrill Garbus about her song, Water Fountain.