From rock-paper-scissors, to tennis, to Mario Kart, every game is a designed system and all games are grounded in the same design principles. One popular game in particular has a mixed reputation with game players and designers alike: Monopoly.

Participants circle the board, buy property, build houses, collect money, draw cards and pay money when landing on a space owned by another player. The game can be slow, and its endings can be dark—the game ends when a player goes into total bankruptcy. Yet this was not always the case. 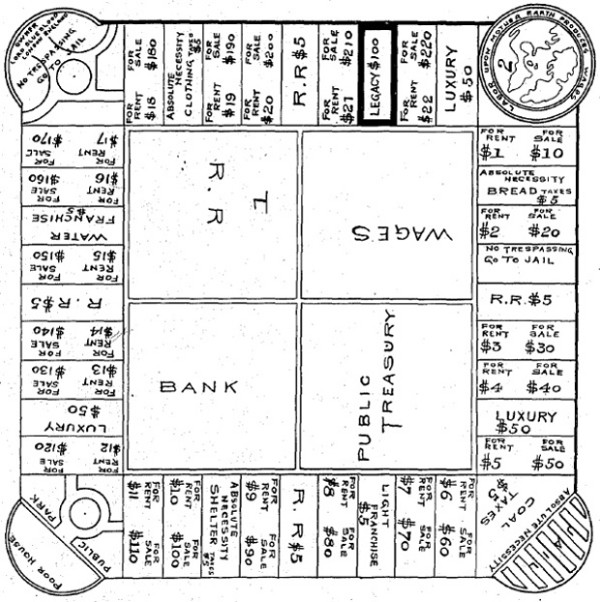 The Landlord’s Game, which preceded Monopoly, was designed to illustrate the benefits of Single Tax theory as proposed by Henry George. The game’s creator, Lizzy Magie, patented it in 1904 and included two sets of rules.

In one rule set, ruthless monopolists attempted to crush one another. In the other set, building property benefited everyone on the board. The goal was to illustrate the benefits of a more egalitarian economic system in which, theoretically, everyone could be a winner (or at least avoid landing in the poor house).

The rules were even made to be switched mid-game:

“If the players wish to prove how the application of the Single Tax would benefit everybody by equalizing and opportunities and raising wages, they may at any time during the game put the single tax into operation by a vote of at least two of the players.”

The first set of rules, however, was more cutthroat, and more fun. People liked the monopolist rules better.

During the Great Depression, Charles Darrow encountered a version of the game created by Quakers in Atlantic City, New Jersey. He tweaked it and called the result Monopoly. It sold well, perhaps in part because it was a pleasure for players to hold fictional money in a time of widespread poverty.

Parker Brothers eventually purchased the game rights from him, then eventually bought Magie’s patent for The Landlord’s Game, reportedly for $500.

Monopoly has evolved in the century since its creation but remains an incredibly popular game to own, even though no one plays by the original rules. Today, the game can be found in over 100 countries and 37 languages; in the US alone there are variant editions related to everything from cities and national parks to movies and video games.

Monopoly has become more than just a board game. It is a cultural phenomena enriched in part by all of its associations and the ways we play, use and misuse the game in creative ways.

This episode also featured 99pi’s own Avery Trufelman as the iron, with Sam Greenspan as the hat, Katie Mingle as the scotty dog, and game-winner Kurt Kohlstedt as the wheelbarrow. Also playing was Morgan Dewey as the racecar. Special thanks to Emily Kwong and Jesse Fuchs, Matt Forbeck, Sophie Belkin-Sessler, and everyone at the NYU Game Center.