The Residence Act of 1790 called for the creation of a new capital city for the United States. Dividing up land previously belonging to Maryland and Virginia, a diamond spanning ten miles on each side was marked at each mile with a similar stone. And while a majority of these 40 markers still exist today, their conditions vary and each one has come to tell its own unique story over the centuries. 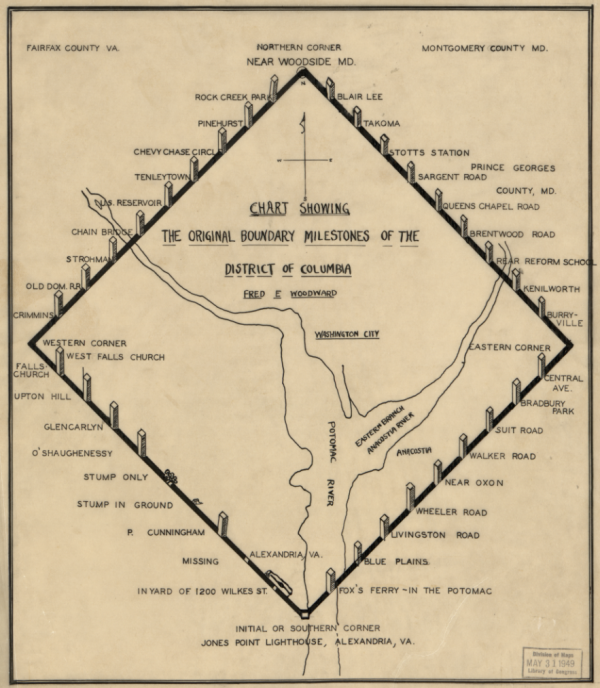 “The oldest set of federally placed monuments in the United States are strewn along busy streets, hidden in dense forests, lying unassumingly in residential front yards and church parking lots,” writes Tim St. Onge of the Library of Congress. “Lining the current and former boundaries of Washington, D.C., these are the boundary stones of our nation’s capital …. But over the years, weathering, urban development, and other factors have taken a toll on the stones themselves.”

The survey team tasked with marking out the boundary of the District of Columbia worked clockwise around the proposed diamond starting with the southern tip. A ceremonial stone from 1794 still sits along the Potomac River at Jones Point, right where President George Washington asked his surveyors to start. Today, it is tucked into the seawall of a lighthouse, locked behind a metal gate in a concrete box.

Each stone featured the inscription “Jurisdiction of the United States” on one side and “Maryland” or “Virginia” on the other, along with the year of their placement and distance from the first stone. Remarkably, 36 of the markers were still in place when Fred Woodward went to photograph and map them in 1905, albeit in various states of decay. He subsequently recommended metal cages for preservation purposes.

Citing his findings, the Daughters of the American Revolution (DAR) began wrapping the stones in iron fences for protection. But “despite DAR’s care and attention,” reports Boundary Stones dot org, “many of the stones fell on hard times during the mid-1900s. Several were repositioned, removed, lost, or buried during construction projects.”

One such lost stone, Southeast 8, was replaced in the mid-1900s, but its replacement was buried during a subsequent construction project. This stone was later found eight feet underground in its mangled iron cage after some historical research and mapping. Excavators lifted it along with its base from the soil and set it back on the surface.

A particularly well-preserved stone (at least until recently), Southeast 6, was run over by a car less than a decade ago. Its cage was smashed as it was knocked off its base — it has since been put back into place. The cage of Northeast 3 suffered a similar collision in recent years as well, though the already half-sunken stone itself avoided serious damage.

Boundary stones in various states of protection and decay by Mark Zimmermann (CC BY 2.0)

Over time, the shape of D.C. has shifted substantially, leaving the stones in unusual locations and various states. Some are situated along sidewalks or in front yards. Others have been moved or have had to be replaced. A few have also suffered from poor fixes made over time. Some sites have plaques, either in place of missing markers or affixed to existing stones (alas, not the greatest preservation solution).

Boundary Stones dot org has not only mapped out each location but also features pictures of each stone, showing them wrapped in iron, tucked behind grates or simply sitting out on display. Increased awareness about the stones has led to a stepping up of preservation efforts in recent years, while digital maps have helped visitors find and admire each of the stones in all their (varied states of) glory. 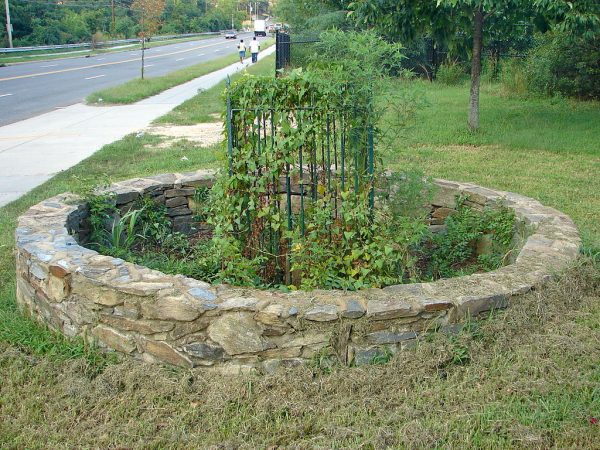 Plaques of Future Past: Eccentric Stone Monuments to Anti-Gravity Research