As the U.S. war effort ramped up in the early 1940s, the Navy put out a request for chair design submissions. They needed a chair that was fireproof, waterproof, lightweight and strong enough to survive a torpedo blast. In response, an engineer named Wilton C. Dinges designed a chair made out of aluminum, bent and welded to be super strong. 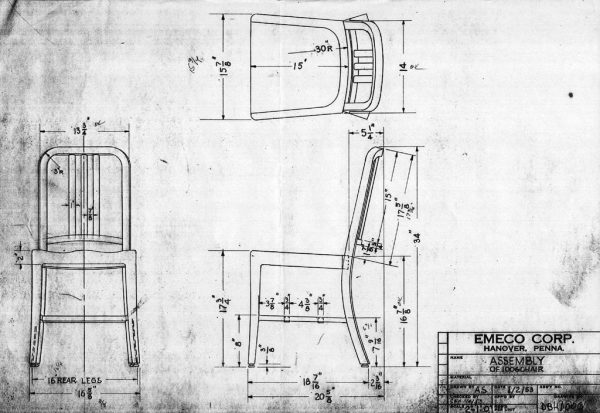 The chair was made to be relatively utilitarian, with an arched top and three slats coming down the back to meet a crossbar. A curved “butt divot” is one of its most distinctive elements.

To show off the durability of his creation, Dinges took it up to the eighth floor of a hotel in Chicago, where the Navy was examining submissions, and threw it out of the window. It bounced, but didn’t bend or break.

And so the Navy gave its inventor the contract, and he, in turn, opened a factory and called his new business the Electrical Machine and Equipment Company, or: Emeco. 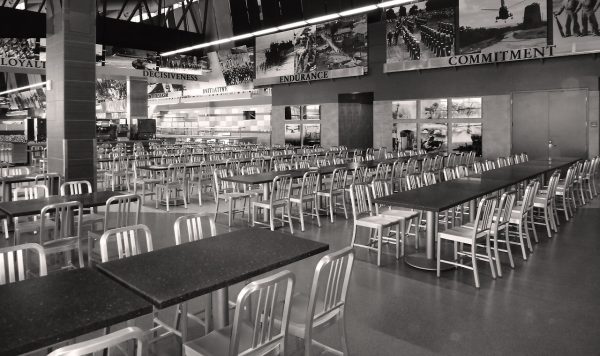 Over the next few decades, Emeco built various other chairs but also shipped hundreds of thousands of the 10-06 Navy chairs to the US government from its factory in Hanover, Pennsylvania. These became standard issue for battleships, aircraft carriers and submarines.

In the 1970s, Emeco was purchased by a California businessman named Jay Buchbinder. But by the 1990s the company was losing a lot money, so his son Gregg took a trip to the factory to check on things. The situation looked bleak, recalls Gregg — “the guys were just waiting for the company to close.” Then he overheard a heated phone conversation between the office manager and a customer. After she hung up, he asked who she’d been talking to. “It’s some guy named Giorgio Armani,” she told him. Recognizing the name, Gregg started to dig through the files, and discovered Emeco was shipping chairs to designers like Terence Conran and hip entrepreneurs like Ian Schrager. Wealthy tastemakers had discovered the beauty of these indestructible Navy surplus chairs. Gregg suddenly realized Emeco could sell to a mostly untapped, higher-end market.

The original 10-06, meanwhile, has become one of the most iconic chairs in the world, featuring prominently in films like The Dark Knight.

But not all of the chairs that bear this look are made by Emeco. A lot of them are knockoffs — fakes. Last month, Benjamen Walker of Theory of Everything walked 99% Invisible Host Roman Mars around New York city, pointing out real and fake Emeco chairs. Sometimes you can spot the difference in a design detail, or just the weight of the fakes, which are often heavier.

“In America today, most people think of design as shape,” Gregg Buchbinder told Walker on a tour of Emeco’s Harrisburg factory. “The average consumer doesn’t realize that design is so much more than that” — how the chair is made also matters. “There are 77 steps to produce the navy chair,” he explains.

Sheets of aluminum are used to mold the seat bottom (which, according to legend, was modeled after the derriere of Betty Grable, a famous Hollywood actress of the 1940s). Throughout the factory, skilled craftspeople can be found routing holes into extruded aluminum, and working with the three famous vertical back slats. The fact that these meet a crossbar and don’t go to the seat is an Emeco signature, as are three welds left unground at the top of the chair’s back (more welds used to show, but finicky design clients wanted them streamlined). Finally, the chairs go through a series of water baths and an oven, resulting in a chair that is, Gregg says, stronger than steel.

Many of the designers who work with Emeco want to see this 77-step process and make the trip out to meet the workers. Gregg recalls that “every time we take an architect or designer through this whole process, they always say the same thing: you need to charge more for your chairs.” But architects must have a big chair budget, because these chairs are not inexpensive: a new 10-06 costs around $550.

Meanwhile, though, “there are several websites that have listings from vendors of counterfeit chairs,” says Madson Buchbinder, Gregg’s wife, who does press for the company and often looks for knockoffs. She scans platforms like Houzz, eBay, Amazon and Alibaba, and notes the exact copies are the easiest to get taken down — when there is no ambiguity, marketplaces are quick to comply. And in 2012, when Restoration Hardware started selling a “Naval Chair,” they settled out of court. Emeco has also gotten Target and IKEA to take down fakes.

This strategy works because Emeco has “trade dress protection,” which is designed to protect consumers from the lookalike imitations of name-brand products. It doesn’t protect the function or process, but rather the look, which, in this case, means the iconic shape of the chair.

But not everyone thinks Emeco deserves this protection. Lawyer and author of The Knockoff Economy: How Imitation Sparks Innovation Christopher Sprigman is a skeptic. He notes that when people see this iconic chair, they don’t think “Emeco,” they think “nice chair.” He also doesn’t believe it’s particularly distinctive and that in a full-out legal battle Emeco might lose their trade dress protection in court. 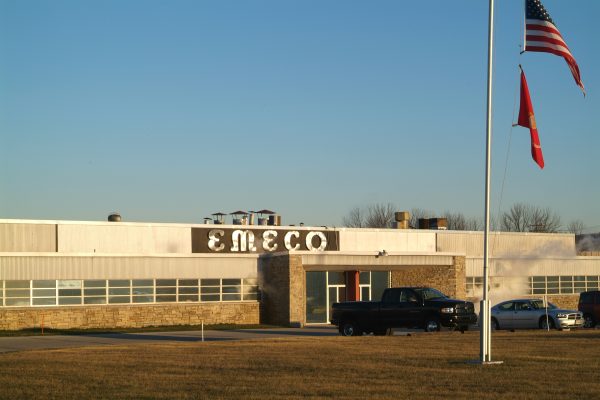 What bothers him is that companies like Emeco and Herman Miller and Vitra turn to the law to take knockoffs out of the marketplace, because “to the extent this succeeds, these designs become the territory of the rich and no-one else can access them.” In short: he believes these protections are bad, not good, for consumers. “One of the things that is real about them [is] they’re for the rest of us … they bring the rest of us into the world of the artist … they allow us to participate in the fashion world, even if we can’t afford the stuff on the runway … they allow us to participate … [and] that’s democratizing.” 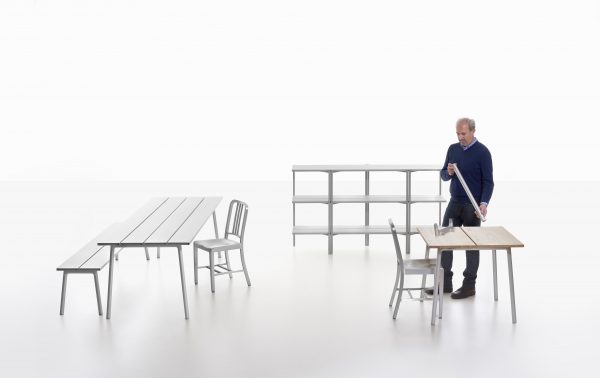 But for Gregg, Emeco knock-offs also make the country (and the whole planet) worse by filling landfills with garbage chairs. “All of our product is engineered for the longest life possible,” he says. His “goal is to produce something where it has the least impact environmentally and has the longest life … the opposite of planned obsolescence.”

In some cases, the knockoffs are arguably sufficiently different to be their own thing, but in many cases the copying also goes over the top. Take, for example, the Delta Chair from Crate & Barrel, which adds a fourth slat to the Emeco design, but also leaves selective unground welds, imitating a small key signature detail. The design of the Delta Chair may be different enough to avoid trade dress lawsuits, but Gregg says it intentionally tries to copy the essence of Emeco’s Navy Chair.

99% Invisible
Edge Of Your Seat

He also notes that despite all of these similarities, there’s a key difference: this chair can’t survive a fall from an eight-story building.