In the Czech Republic, Elbe river water levels have fallen to reveal submerged “hunger stones” dating back hundreds of years. These boulders record past droughts and resulting famines. They also caution citizens — one etched warning reads: “If you see me, weep.”

When water levels drop in the Czech Republic’s Elbe River, the Hunger Stone reveals dates of other drought stricken seasons, some inscriptions dating back to the 1600’s pic.twitter.com/WExu9EFCCv

Earlier this year in Ireland, a large ring-shaped silhouette was spotted on a farmer’s field by observers in an airplane above. Archeologists were consulted and agreed that a henge once stood on this location, originally constructed up to 4,500 years ago.

Prehistoric features and ghost buildings are being uncovered by our drying landscape including the grand Clumber House in Nottinghamshire. Follow the link to find out why

The site could have gone unnoticed were it not for an unusually dry spell in this famously green country known for its rainfall. The henge itself was built of wood, long ago collapsed and rotted away, but the depressions created by support posts had a lasting impact. Over time, these subtly compacted spots collected water, resulting in slightly different growth patterns. Less-starved crops rising where the ancient monument was erected stand out as greener and healthier, enhancing their visibility against the browner plants on all sides.

“These phenomena are known as cropmarks,” explains Paul Cooper. Where an ancient wall lies buried, water is channeled away, so the grass gets less water. Ancient ditches, by contrast, create areas of deeper soil that hold water more effectively, giving the grass a deeper green.” And water scarcity “heightens these differences.” 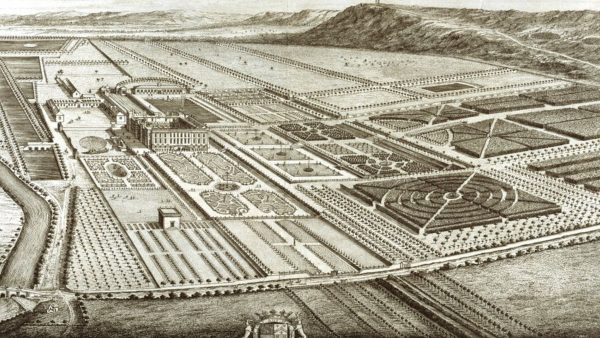 In nearby England, other architectural “cropmark” footprints have also surfaced due to drought conditions. The heatwave in Britain revealed, for instance, the remains of an old 17th-century garden (above) on the site of the famous Chatsworth Estate in Derbyshire.

Amazing cropmarks of Chatsworth’s formal garden are revealed thanks to the dry summer conditions! Have you spotted any cropmarks in any Scottish gardens? We’d love to see them! https://t.co/vpHHUB5mHa #gardens #heatwave #heritage

Due to a sweeping regional reorganization by the first Duke of Devonshire hundreds of years ago, an entire town was transformed to accommodate one man’s grand landscape vision. Today, what’s left of that endeavor (and what came before) is starting to show up again.

Architectural ghosts are surfacing in the UK due to the ongoing heatwave 🏚️ https://t.co/i4HgIfLAzU pic.twitter.com/OjV88rh0Bv

Surface variations in Nottinghamshire revealed something similar earlier this year: the floorplan of a “ghost” mansion. This elaborate and expansive 18th-century structure was demolished nearly 100 years ago, but the outlines of rooms and hallways became visible again as the foundations below absorbed heat and scorched the soil above.