From the outset, Kurt and Roman were worried less about hitting a target word count for The 99% Invisible City and more about going over it. Between Roman’s decade of storytelling at 99pi and Kurt’s architecture education and work on WebUrbanist, we had a lot of pent-up stories about design and urbanism to share. Inevitably, though, priorities were made as the book evolved and some things didn’t make the cut, jettisoned for various (genuinely good) reasons along the way, including (for example) a sizable arc about architectural camouflage. 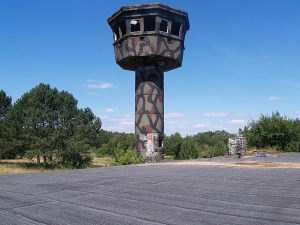 There is still a “Camouflage” section in the book, but it grew too long and began to depart from the everyday a bit too much. It is still thorough, but probably better for having been abbreviated. For those curious, however, we considered stories about projects like an airplane hanger in Seattle that was draped with an entire fake suburb during World War II to deter would-be enemy bombers. For those interested in the tale, though, Kurt wrote a brief article detailing this remarkable feat:

Then, too, there were pages about incredible fake towns erected for all kinds of purposes, including simulated police and military training sessions. Once it became clear these would not be covered in the book, Kurt turned around and wrote up a shorter version as a web article:

More broadly, these kinds of “fake places” are often called “Potemkin villages” — the phrase itself is often used in reference to politics and economics in addition to actual built environments. As one version of the story goes (there are multiple), it all started with Grigory Potemkin attempting to impress Russian Empress Catherine II on a tour of her empire. As she traveled, he reportedly sent workers ahead to erect entire portable villages at various locations along the way. These were populated with faux locals to simulate a thriving countryside, then disassembled when her delegation passed by and reconstructed at the next stop on the route for her to see again. His attempts to woo the empress aside (which may not have been as extensive as historical accounts describe) these kinds of places are a persistent feature of built environments throughout the ages, and not always so benign.

During World War II, for instance, Nazis gave the Red Cross access to a concentration camp while carefully controlling the experience to make the place seem humane. Venezuelan President Hugo Chávez reportedly had workers paint the bottoms of potholes along the routes taken by foreign dignitaries to disguise any damage, attempting to make his nation appear more prosperous to outsiders. More recently, in anticipation of an upcoming G8 summit, closed storefront windows in Enniskillen, Northern Ireland were populated with images depicting open businesses stocked with goods to impress visitors. Perhaps the most persistent and audacious of these efforts is one found in North Korea, discussed in this article about the Korean DMZ — an entire fake town with fake people occupying it day in and day out:

Back to the book: at some point, these topics started to seem too place-specific — they weren’t designs that would have analogues in most (or even many) cities. Still, many such stories that didn’t make it into the book nonetheless found their way onto the website or show in other formats. We try not to let good tales of design go to waste, so between episodes, mini-story sets and web articles, most have found other homes. We put a lot into the book, but at some point less really is more and editing is essential, as is the case in any produced work, including articles and episodes. Meanwhile, you can read the 100+ stories that did make the cut in our upcoming book, The 99 Percent Invisible City: