It’s a classic city scene: kids playing outside in the spray of fire hydrants, wrenched open and spilling water out onto the sizzling streets of the Big Apple. While removing caps still technically illegal in many cities, it’s common to find firefighters lending a hand and helping people open hydrants in a more controlled fashion during the dog days of summer. [Note: This piece was adapted from the book: The 99% Invisible City]. 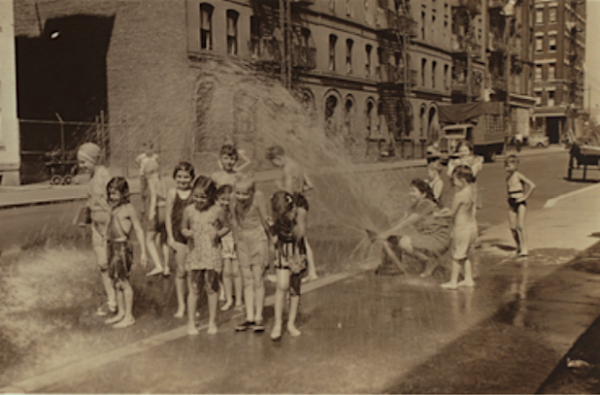 The New York City government in particular has gone back and forth on the issue of opening hydrants. But historically, officials have outright sanctioned such openings at times, particularly during periods when citizens were clearly and broadly suffering amidst extreme hot spells. 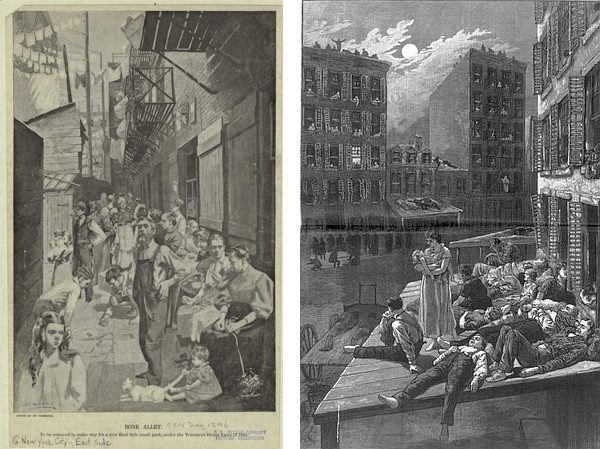 When a heatwave swept the East Coast in 1896, cities were hit especially hard as urban heat island effects drove up already soaring temperatures. Densely paved and packed places were devastated; Lower Manhattan alone had over 1,000 deaths. In a time before air conditioning or the widespread use of electric fans, citizens were hit hard by the sweltering heat. Some even slept on rooftops or fire escapes, which led to injuries and deaths from rolling off of buildings. 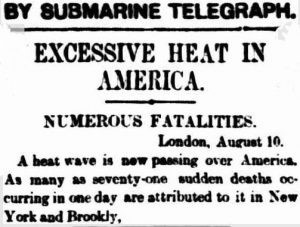 In the midst of the crisis, police commissioner Teddy Roosevelt (yes, that one!) set about distributing free ice, particularly in poorer areas of the city. Bans on sleeping in city parks were suspended temporarily to let overheated citizens spent nights out in the open without being arrested. Fire hydrants were also opened up to help clean up and cool off the streets. Grateful tenement-dwelling families came out in droves to get relief from cramped living conditions and poor air circulation. 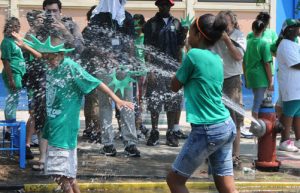 Over the next century, citizens illegally opening hydrants became something of a New York tradition on hot summer days, though not without its dangers. The high pressures of an unmodified flow can hurt people, knocking them down or pushing them into the street. The release of that force can also lower the water pressure for area residents as well as for firefighters who need that pressure to actually fight fires. Also, the uncontrolled spray of a single hydrant can push out thousands of gallons per minute, wasting a lot of good, clean water.

So in 2007, the NYC Department of Environmental Protection (DEP) rolled out a fresh new program to educate people about the dangers of opening hydrants on their own. During peak summer months, they hire youths to be part of their Hydrant Education Action Team (HEAT). These kids do more than just go out and explain to local communities the risks — they also promote options. “Hydrants can be opened legally if equipped with a city-approved spray cap, which releases only 20 to 25 gallons per minute,” explains the DEP. And these “spray caps can be obtained by an adult 18 or over, free of charge, at local firehouses.”

So, what started out as a top-down, city-sanctioned effort became an illegal, bottom-up guerrilla activity, then evolved into a safer, municipally approved compromise. A century of dialogue between a city and its citizens (sprinkled with official and informal efforts) culminated in a common-sense solution everyone could get behind.

In The 99% Invisible City: A Field Guide to the Hidden World of Everyday Design, New York Times bestselling authors Roman Mars and Kurt Kohlstedt uncover engaging stories like this about all the thought that goes into cities that most people don’t think about. Over the course of 400 pages and 100+ illustrations, we explore the origins and other fascinating tales behind power grids, street signs, safety patterns, public benches and much more. If you enjoyed this piece, be sure to check out the book as well!

Least Resistance: How Desire Paths Can Lead to Better Design

Informal ‘desire paths‘ can form with as few... [Read More]