The story starts with the mayor of a Prussian city, who wrote to the famous mathematician Leonhard Euler with a question: how could one walk through Königsberg without crossing any of its bridges twice? At first, Euler thought this question trivial, but the “Seven Bridges of Königsberg Problem” and its (lack of) solution helped pave the way toward new mathematical branches of topology and graph theory. 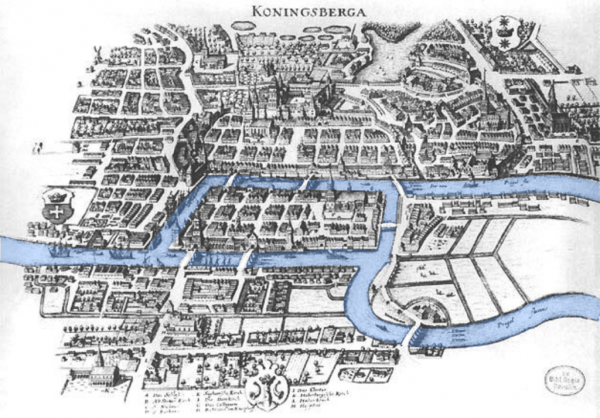 The city itself, now part of Russia, was situated along the Pregel River and included two islands, each connected to the other (as well as the mainland). The problem sounded simple: could a person move through the city by crossing each bridge once, but not more than once? Euler’s initial response to the inquiry was scathing: “Thus you see, most noble Sir, how this type of solution bears little relationship to mathematics, and I do not understand why you expect a mathematician to produce it, rather than anyone else, for the solution is based on reason alone, and its discovery does not depend on any mathematical principle.”

Still, the question nagged him, and eventually Euler published a paper in 1741 addressing both the specific Königsberg puzzle but also its broader mathematical implications. “Euler’s great innovation was in viewing the Königsberg bridge problem abstractly,” explains mathematics Professor Judit Kardosby, “using lines and letters to represent the larger situation of landmasses and bridges.” And in the end, he concluded that no solution was even theoretically possible.

Through this paper on a seemingly trivial problem, “Euler accidentally sparked a new branch of mathematics called graph theory, where a graph is simply a collection of vertices and edges.” What Euler called the “geometry of position” formed the basis of this new frontier.

As for the city itself, since renamed Kaliningrad: two of the bridges were bombed out in World War II. Two others were later swapped out in favor of highways. Only three remain, situated in the midst of a city that was largely rebuilt in the wake of the war. Today, a positive solution to the bridge problem actually exists due to these changes over time.

Some of the bridges may be gone, but mathematical legacy of this seemingly pedestrian problem remains: “Today a path in a graph, which contains each edge of the graph once and only once, is called an Eulerian path, because of this problem. From the time Euler solved this problem to today, graph theory has become an important branch of mathematics, which guides the basis of our thinking about networks.”

99% Invisible
The Age of the Algorithm

Previous Episode: Ketchup & Mustard Theory: How Marketers Use Colors to Convince Consumers
Next Episode: Modern Footwear: Designers Take a Walk in Someone Else’s (Lack of) Shoes