When people critique cul-de-sacs, a lot of the time they’re actually critiquing the suburbs more generally. The cul-de-sac has become sort of like the mascot of the suburbs– like if suburbia had a flag, it would have a picture of a cul-de-sac on it. Cul-de-sacs by definition aren’t well connected to other streets and they are far away from town centers.

People can argue whether or not these are pros or cons, depending on what lifestyle choices they prioritize. For little kids, cul-de-sacs can be great, but they do have some real, quantifiable design flaws. Imagine being a garbage collector, or a street cleaner, instead of driving down one long street and collecting all the garbage from that street, then taking a right onto the next street and so on, you have to turn around in all of these cul-de-sacs over and over again. It takes more time and uses more gas. They’re expensive for governments to maintain, and now, governments are starting to enact regulations against them. 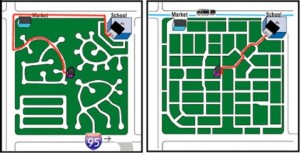 Producer Katie Mingle talks with Matt Lassiter about cul-de-sacs, the pitfalls of suburban design, and of course, E.T.

Special thanks to The Congress for the New Urbanism, who provided very helpful background information for this piece.

ALSO — Thank you, beautiful people! The show received dozens of new iTunes reviews and well over 100 new followers on Facebook. It was so lovely to read everyone’s kind words about the show and know that I’m at least partially achieving my many goals for the program. Several of the reviews could’ve been lifted directly from my mission statement (the one in my head) so clearly that you’re picking up what I’m laying down. I knew you were capable, but I wasn’t sure I was. Anyway, your reviews have been very effective and are helping the show stay high up in the “Arts” rankings. Keep them coming! Thanks, again!