Asked about the genesis of her new album of 99pi music, Sean Real says it started with the very first episode she worked on: “I had the idea to put out the music from the beginning” Working on Miss Manhattan in 2016, Sean already wondered: “How am I going to release this?”

Still, it would be a while before this vision started to really take shape. At some point later on, after making over 100 songs for the show, Sean thought: “Now I’ve got a good bank of songs … maybe I’ll put together a compilation.” Initially, she started to think in terms of releasing a series of albums sorted into themes. Indeed, for the sake of producers on the show, Sean’s (now 300+) tracks are already cross-sorted in all kinds of ways, making it easier for staff to peruse the library for existing tunes. 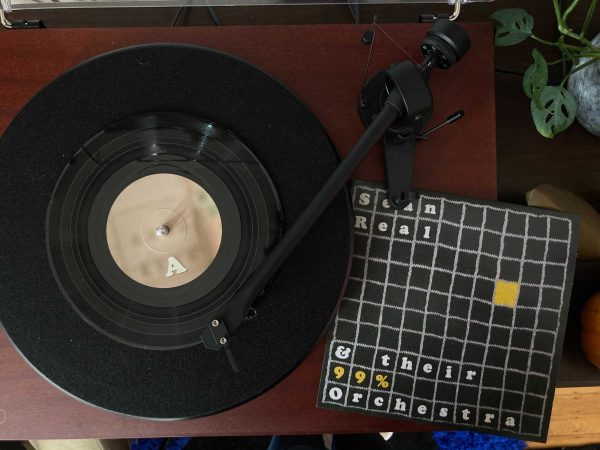 Of course, Sean’s main work as 99pi’s composer naturally pushed back the process of organizing an album. As time went on, it also became less a question of “How can I release a proper, album-length amount of music?” around themes and more a challenge of creating a “good listening experience” overall. So Sean “got up the confidence to bring it up with Roman,” and together they decided to do a vinyl release. She had “never done that before — never had the money to do it.”

The finished album would be a 7-inch — a set of greatest hits and a sampler of sorts to introduce people to Sean’s varied catalogue. In parallel, a digital version would also be made available for download.

So while Sean had started by “arranging different themes of songs for potential future albums,” for this one she ended up gravitating toward tracks that defied classification. The album thus became a collection of Sean’s favorites, including ones that didn’t fit any particular theme. It was distilled to “the ones I really wanted people to hear immediately.”

As to the crafty cover art, Sean says it was all “my partner, Courtney Riddle — that was entirely Courtney’s idea.” As to the design: “It’s like a representation of the woven fabric of the show,” Sean notes, a conceptual analog for the creative process of making 99pi layer by layer. Of the album’s popularity, she says: “I feel very seen.”

Asked the classic what-didn’t-I-ask interview question, Sean thought about it and replied: “Something that I keep thinking about that I think is really funny … is that this process took so long … my pronouns are different now than they are on the record.” Still, Sean didn’t seek to change the title, but “wanted to keep that as a document of where I was in my journey.” So while she feels good about this finished work, she wants “the next one to say ‘Sean Real & Her 99% Orchestra.'”

And yes, Sean is already thinking ahead to the next potential album. Nothing is certain at this point, but a full-length vinyl record is definitely on the (turn)table. Meanwhile, the 7-inch sold out almost instantly, but more are available for pre-order (and there’s a digital version, too)!

Previous Episode: Highway Men: The Rivalrous “Road Boosters” Who Capitalized on Early Motorways
Next Episode: The Making of Murphy’s Bed: Urbanization and the Rise of Fold-Down Furniture