Uniforms matter. When it comes to sports, they might be the only thing to which we’re actually loyal. Jerry Seinfeld may have said it best:

Sports uniforms are packaging. But unlike any other packaging, if the product inside changes or degrades we remain loyal.  Players come and go, but change the uniform, and you’ll hear about it.

There are very few ways for players to put their own personal style into their uniforms. In baseball, in the face of huge opposition from curved-brim loyalists, some players take the bold stance of wearing a straight brim, like George Sherrill who is nick-named “The Brim Reaper” for his flat-brimmed style.

If you’re a traditionalist, and also inept, you can use this contraption to get the perfect curve.  Whether curved or straight, the brim has also become a space where players can express themselves with semi-secret messages.

But for people who really geek out about baseball uniforms (like Paul Lukas from Uni Watch) the space below the knee may be the most interesting.  It is here that players have the most choices, can make the biggest statement, and be, in the words of Lukas, masters of their own “uni-verse.”

Most players today choose to wear their pants long (like George Sherrill is doing, pictured above), but if you truly want to honor baseball’s hosiery heritage, you should wear your pants up over your calves and a sharp pair of stirrups. 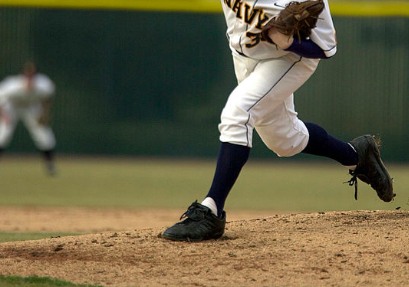 A stirrup is like a sock, but one that loops underneath the arch of the foot. A century ago, baseball pants were knickers, and what you wear with knickers are stockings. But in the early days, baseball was a pretty rough and tumble game. Players were liable to get cut up by opponents’ spiked shoes—and if you got spiked in the shins and started bleeding, the dye from your stockings could get in the wound and, it was feared, you could get blood poisoning.  (These were the days before colorfast dyes.)

So someone had the idea that if you wore a white undersock ( “sanitarires” or “sannies” for short), you could stirrup on top—thus allowing you to protect your blood while also repping your team colors. The feet are cut out of the stirrup so as to keep from having to cram two pairs of socks into your cleats.

Originally, the foot opening in the stirrup was tiny, just enough for your foot to fit through. But almost immediately players began pulling it up and stretching it higher, thus exposing more and more of the sanitary undersock. By the 1960s, players like Frank Robinson of the Baltimore Orioles were actually cutting the bottom loop of the stirrup and adding more fabric to it, so that the stirrups could be pulled even higher than the manufacturer had intended.

Pitcher Josh Outman (shown here in a Rockies uniform, but currently with the Cleveland Indians) carries on the tradition of sporting stripey stirrups.

According to Paul Lukas, the greatest baseball uniform of all time is the 60s era St. Louis Cardinals. 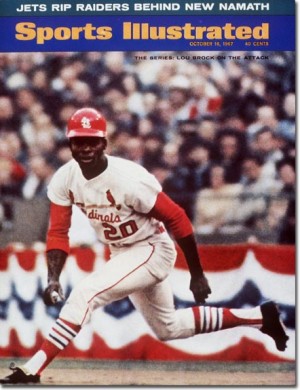 Paul Lukas of Uni Watch (and creator of the zine Beer Frame, to which 99% Invisible owes a considerable debt) talked with Jesse Thorn, host of the NPR show Bullseye, owner of Maximumfun.org, and life-long SF Giants fans, even though it’s really hard to wear the cap out because black and orange doesn’t go with anything.