Anonymous is not a group. It is not an organization. Rob Walker describes Anonymous as a “loosely affiliated and ever-changing band of individuals who… have been variously described as hackers, hacktivists, free-expression zealots, Internet troublemakers, and assorted combinations thereof.”

But when Anonymous came up against the Church of Scientology, a small, non-hierarchical collection of Anons decided to take to the disparate phrases, images and ideas circling around the 4Chan.org /b/ message board (where Anonymous has its roots) and combine them into a very engaging and effective “brand identity.” (For lack of a better word. Is there a better word? I’d love to hear it. -rm).

The over-the-top, ominous voice of Anonymous was established in an online video and manifesto directed at the Church of Scientology: 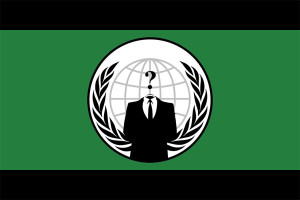 The Anonymous logo is comprised of a headless man in a suit, with a question mark where the head should be, juxtaposed against a UN flag. All of these elements are freely interchangeable and can combine with other Anonymous imagery (see top illustration). According to Walker, the logo is “a cleverly subversive, and ironic, appropriation and exploitation of paranoia about Big Brother-style faceless power.”

And then there’s the mask. Appropriated from the graphic novel and movie “V for Vendetta,” the V mask (designed by comic book artist David Lloyd) has become the de facto public face of Anonymous, and it serves as such a powerful image that it has skipped over into other street protests like the Occupy Wall Street movement. Alan Moore, the author of “V for Vendetta,” has expressed his support of demonstrators exploiting the theatrical qualities of the V image in street protest. 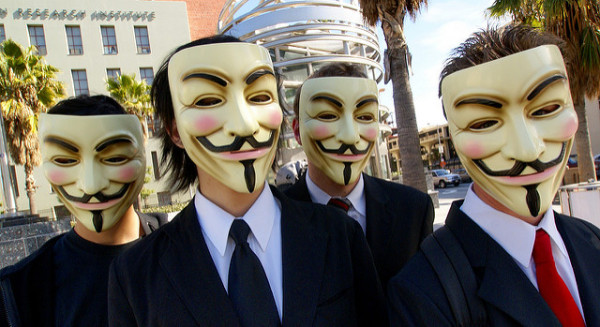 In this episode, Rob Walker explores the origins of the meme-like images in the Anonymous “visual brand” and explains why these icons so powerfully define a phenomenon that eschews definition.

This piece was produced by me and Rob Walker based on his article “Recognizably Anonymous” in Slate.