There’s a secret jazz seeping from Washington’s aging Metro escalators – those anemic metal walkways that fill our transit system… they honk and bleat and squawk… why are you still wearing those earbuds?” — Chris Richards, Move along with the soundtrack of Metro’s screechy, wailing escalators, The Washington Post, 01/14/11

And if you think that a “slightly broken” escalator can’t be lovable, then our own Sam Greenspan would like to introduce you to Chris Richards. Chris Richards is a music critic for the Washington Post, and after years of ignoring the wailing and screeching of the much maligned, often broken escalators in the DC Metro, he began to hear them in a new way. He began to hear them as music.

This story was adapted from one that Sam Greenspan produced for his podcast, Whisper Cities, which tells stories of overlooked places and the people who find them.

The designer of the first DC Metro stations was Harry Weese. Weese’s “Jailhouse Skyscraper” in downtown Chicago was profiled in 99% Invisible #26 by Dan Weissmann. The Metro ceilings may be brutalism at its best. 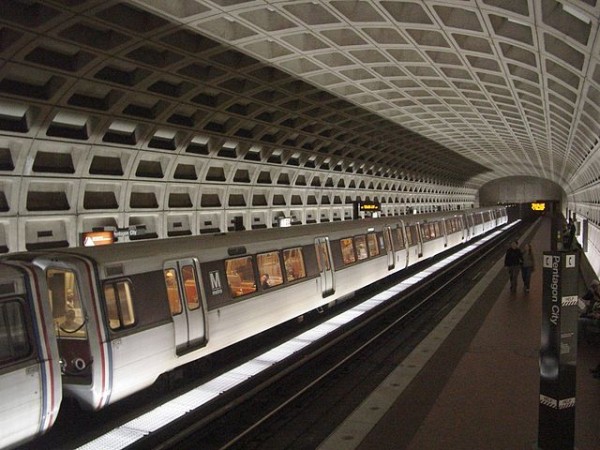 If you don’t get the “Culs-de-sac” joke, listen to this episode.

Radio producers Alex Van Oss and Charles Maynes also created their own Ballad of the DC Metro for Podstantsiya, a Moscow-based podcast and audio collective. (The site is in Russian, but the radio feature is in English.)

THANKS, RADIOLAB!  For a brief shining moment, 99% Invisible was the #2 podcast on iTunes, and #1 in both the Arts and Design categories. Thank you so much for checking out the show. If you’re new here, never fear, you did not miss a thing! All the past episodes are available for download and are great (you know, as a body of work, some are better than others).

If you appreciated Radiolab telling you about the show, do us a huge favor and tell everyone you know to listen and subscribe. If the response that Jad and Robert have gotten is any indication, they will thank you for it!

Let’s hear it! What’s your favorite sound that you know other people hear as just noise? Please leave a comment below.