South Africa wanted to be the first African nation to host the World Cup. They also wanted the tournament to be the start of a new chapter. During apartheid, the country was banned from the international sporting community. But in 2004, they were on the precipice of hosting soccer’s biggest event. South Africans gathered in the streets of Johannesburg, Cape Town, and Durban to await FIFA’s decision.

The vuvuzela is a two foot long injection-molded plastic horn. It only plays one note: a B flat. And it gradually became a regular feature of South African soccer. But prior to the 2010 World Cup, the rest of the world had never heard anything quite like it.  Even people in the soccer world didn’t know what they were. But six years later, by the time the first game of the tournament was underway, vuvuzelas were all over. For critics, the vuvuzela was a relatively new, mass produced noisemaker. But supporters ended to think of the vuvuzela as an instrument, producing a loud, attention grabbing sound that grew out of South Africa’s rich footballing tradition. 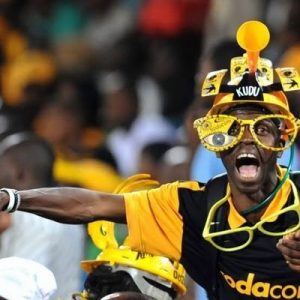 As a youth, Saddam Maake (left) used to bring a bike horn to local football games to support his team. But instead of squeezing the little rubber bulb at the end, he’d take that off and blow into the horn. Later, he began using a large aluminium horn he called a “Boogie Blast.” The Boogie Blast was basically a long metal stick you could blow into. It was also a long metal stick you could beat someone up with, so stadiums eventually banned it. But by then, in 1989, Saddam says he met with a plastics manufacturer and asked him to make a plastic version of the Boogie Blast. This new instrument they created sounded similar.

Saddam says he coined the name ‘vuvuzela’ back in 1992. A claim he supports with photos of him blowing his many horns at football games in the 70s and 80s, and a vuvuzela in the 90s. He also recorded an album in 1999 titled “Vuvuzela Cellular.” Another company, however, popularized the noise maker. That company handed out vuvuzelas for free at football matches and partnered with some local clubs to get more of them into South Africa’s stadiums. It wasn’t long before there was more interest in the vuvuzela and sales started to grow. Soon, the instrument could be distinctly heard at games across the country.

The aggressive marketing worked: in the lead up to the World Cup the sound of South African football was inextricably linked to the vuvuzela. The instrument even appeared in national marketing campaigns fronted by prominent rugby players who’d been called in to promote the 2009 Confederations Cup – a sort of test run tournament for the World Cup. From the moment the World Cup kicked off, the vuvuzela was a constant and persistent presence. From the atmosphere in the stadiums to the jokes on late night TV, it was inescapable. 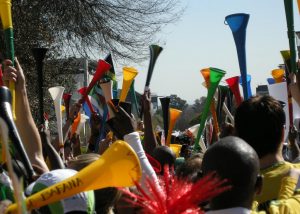 While broadcasters were trying to mitigate the noise on their end, DIY solutions were making their way around the internet. One of them involved routing your TV’s audio through your computer, and using software to remove the particular frequencies of the vuvuzela. Complaints even inspired a study from the South African Medical Journal. It measured the vuvuzela’s sound levels at up to 131 decibels. That’s as loud as a jackhammer or a jet engine. It concluded that prolonged or regular exposure could cause noise-induced hearing loss.

Despite the lack of a straightforward origin story, the vuvuzela is still considered cultural heritage – at least in the eyes of some institutions. The United Kingdom’s National Football Museum and The British Museum both have vuvuzelas in their collections. Saddam’s story is the closest thing the vuvuzela has to an actual origin story. And unlike the noise that surrounded the vuvuzela in 2010, his story is simple: he loved his team and he wanted to show his support for them.

99% Invisible
The Sound of Sport

Today, vuvuzelas aren’t nearly as prominent as they were back in 2010. A few years after the South African World Cup ended, FIFA turned around and banned them from all major tournaments. And several other major sports leagues have as well. Still, just a few months ago, the South African women’s football team won their first ever Africa Cup of Nations. When the team arrived at the airport, they were greeted by fans, expressing their national pride through songs and chants. Saddam Maake was there too, blowing his vuvuzela. There were no complaints about the noise — they just celebrated the victory.