Sounds can have serious impacts on our wellbeing, even (or especially) in places focused on health like hospitals. This is the second episode in a two-part series supported by the Robert Wood Johnson Foundation about how sound can be designed to reduce harm and even improve wellbeing. Check out episode one here.

“Hospitals are horrible places to get better,” believes Joel Beckerman, sound designer and composer at Man Made Music, who has serious concerns about noise in hospital settings. Joe Schlesinger, a musician and anesthesiologist at Vanderbilt Medical Center, has experiened some of this caucophy firsthand while at work. “As I walk in, there’s the hubbub of people talking,” says Schlesinger. There are clinicians and families talking, and big metal carts rolling down the halls. In the middle of all of this, he also hears alarms coming from various patient rooms. Worse, he says, these “are difficult to localize, so I’m not sure which rooms they’re coming from.” Joel Beckerman has experienced the same thing in hospitals he has worked in. “There is a heart monitor,” he explains, which “makes 86 different alarms … there’s no way that that can be meaningful to anybody.”

Alarmingly, too, most of these audible alerts are just false alarms. Sometimes there is a loose connection or a temporary blip in a patient’s vital signs. In the end, few alarms are productive, alerting people to actual problems or conveying comprehensible and useful information. Still, they saturate the hospital soundscape.

“Noisy environment could cause more anxiety … fear and stress for patients and visitors as well,” says Yoko Sen, an electronic musician researching sound in hospitals. “I often hear from parents that when alarms go off for their babies [think] ‘Oh, no! Is my baby going to die?’ It’s very scary.” Sen likes to quote Florence Nightingale, who said that “unnecessary noise is the cruelest absence of care.” 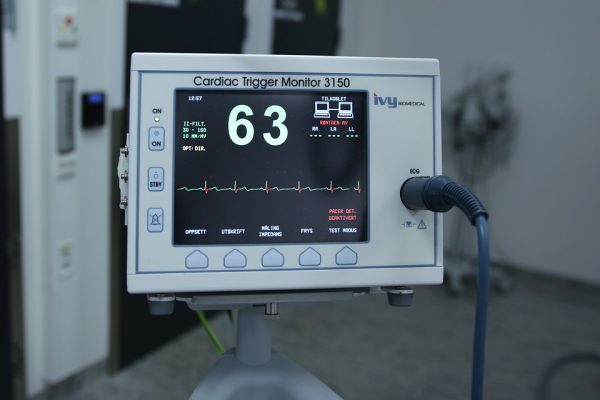 Not all noise is bad, of course. In addition to considering and addressing overall levels of sound and how medical monitoring devices sound together, Schlesinger and his researchers are also trying to figure out how to get the benefits of music in the operating room.

Both Schlesinger and Sen are developing alarms that are tuneful, more pleasing and designed to convey more information more clearly and quickly. “I don’t wanna know just when something is bad. I wanna know when something is trending towards being bad,” says Schlesinger. Joel Beckerman of Man Made Music also believes our hospital soundscapes can be improved, evolving from their current state of unhealthy noise to something more useful, clear and organized. “Imagine [if] you could walk into a room and be able to sift through enormous datasets by sound alone,” Beckerman suggests. He strongly believes there is room to improve the “sonification of data” in hospital rooms, creating idealized soundscapes to replace the current caucophy.

Support for this episode was provided by the Robert Wood Johnson Foundation. The views expressed here do not necessarily reflect the views of the Foundation. The Robert Wood Johnson Foundation is working to build a culture of health that ensures everyone in America has a fair and just opportunity for health and well-being, which includes exploring how our current or future environments will impact daily life.

Thanks to Man Made Music for contributing to this episode as Executive Producers and provided editorial support and soundscapes for this special series. Learn more about Sonic Humanism.

Streaming in the Victorian Era: Early Synthesizer Sent Out Tunes by...