In the mid-19th century, decades before home refrigeration became the norm, you could find ice clinking in glasses from India to the Caribbean, thanks to a global commodities industry that has since melted into obscurity: the frozen water trade.

In the cold Northeast of the United States, workers would cut ice from frozen ponds, haul it to port, put it on a ship and send it around the world on voyages that could last for months.

Fourteen inches of ice was thick enough to support the team of workers and horses assembled for the harvest. These workers would clear off snow and debris then score the exposed surface to create a grid of squares.

They used giant handsaws and ice pikes to break up the squares of ice, then maneuver the chunks to conveyor belts that lifted the huge cubes to nearby “ice houses.” From there, the ice would be shipped by rail and sea across the world. At its peak, this was a huge industry across New England.

Frederic Tudor got the ball rolling (or the cube sliding, as it were) for the whole global network. He was convinced that the local ice industry had global potential beyond regional food preservation. His perseverance eventually earned him the nickname “Ice King.”

Tudor set up shop on the banks of Fresh Pond in Cambridge, Massachusetts, just about two miles northwest of Harvard Square. He found that sawdust was a remarkably good insulator for storing and transporting the ice. It was remarkably cheap as well, a byproduct from lumber mills in Maine.

Though he was a self-taught expert at supply chain logistics, Tudor’s true genius was as a marketer. He had to convince consumers that they needed ice not just to store food but also to cool drinks. His marketing endeavors took him to bars, where he would give free samples and let patrons experience how refreshing a chilled beverage could be. 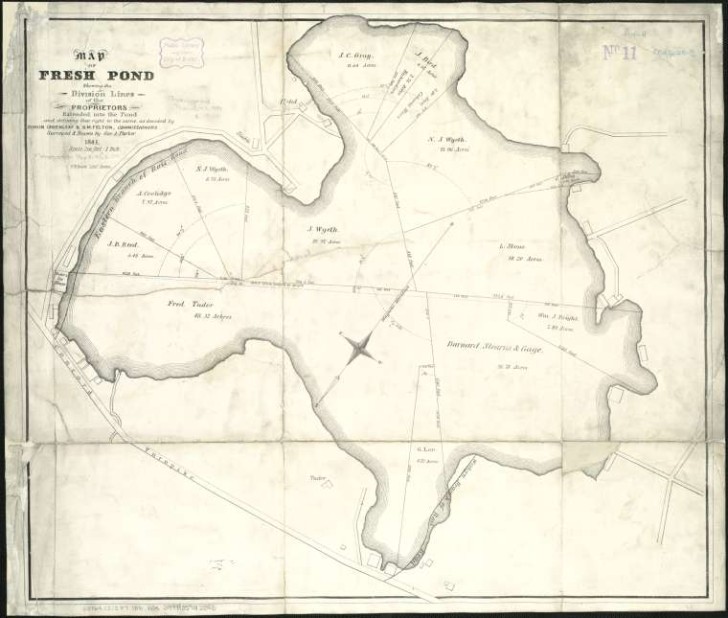 Tudor’s success did not go unnoticed, and as competitors swooped in and set up shop alongside him on Fresh Pond, a Harvard professor was conscripted to carve borders between competing ventures. The map above illustrates how ice rights evolved. Initially, they were tied to adjacent land ownership but rights were subsequently bought and sold separately on a secondary market. Even the property rights of ice that washed downstream became a source of disputes, thanks to the increased value of the commodity.

Decades later, the tide began to turn on the ice trade in America. Refrigerators began making their way into homes while ice-making factories offered an alternative to increasingly-polluted lake ice. As technology kept improving, fewer consumers opted to purchase natural ice scraped off the top of a frozen pond in favor of filtered frozen water from factories. A series of unusually warm winters, known as the “ice famine,” also contributed to the industry’s decline.

Today, regional hobbyists still try their hand at hacking huge cubes from frozen lakes, though such harvests are primarily for fun and festivals, providing material for local ice architects and sculptors. When it comes to chilling drinks, even ice harvest aficionados reach for their freezer.