As Polish-American scientist and philosopher Alfred Korzybski observed in the early 1900s: “the map is not the territory it represents, but, if correct, it has a similar structure to the territory, which accounts for its usefulness.” The point, in part, is that maps are representations of places rather than substitutes for reality, which has various physical and philosophical implications. At the same time, though, the flow of data from places to maps is not always one-directional — maps may be representations of reality, but they can shape reality, too.

The Third-Order Enclave by Kurt Kohlstedt 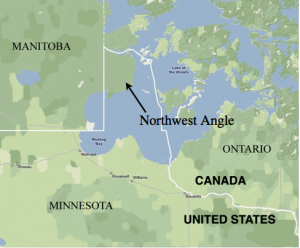 Maps of the United States feature a small but noticeable bump up in the middle — a spot where Minnesota seems to protrude into Canada. This unusual location, known as the Northwest Angle (or simply: the Angle) is technically accessible by boat, but is what’s known as a “practical exclave” — practically speaking, a normal person who wants to get there overland by car or otherwise has to go through Canada, stopping at shacks to video call a border agent or using an app to check in on their way in and back out. So it’s not impossible, but it takes some extra work.

Exclaves and enclaves can get confusing, in part because there is some overlap between them, but also because there are subsets within them — like exclaves are classified as “practical” or “semi.” Alaska, for instance, is considered the world’s largest “semi-exclave” because while it isn’t contiguous with the Lower 48, it does border international waters extensively, making it less cut off than some. Adding even more complexity, some enclaves are also nested within one another. In Europe, for instance, there are a number of Dutch enclaves that are situated inside Belgian enclaves that in turn reside in the Netherlands. 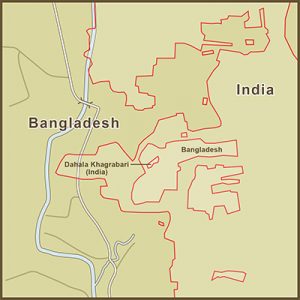 The modest, two-acre parcel at the center of this mess was owned by a Bangladeshi farmer who would wake up in Bangladesh and cross into India to farm his land. This record-setting enclave was eliminated in 2015, however, during the latest in a series of cross-border land swaps between the two countries. Residents were given the choice to stay in place or move “back” across the border into their “home” country.

Cartopinography: The Unlikely Study of Map Pins, Flags, Beads & Other…

Previous Episode: The Weather Machine
Next Episode: Roman Mars Describes Things As They Are