Maps of the United States feature a small but noticeable bump up in the middle — a spot where Minnesota seems to protrude into Canada. This unusual location, known as the Northwest Angle (or simply: the Angle), is the only portion of the mainland Lower 48 that extends above the 49th parallel. And it gets stranger as you zoom in. 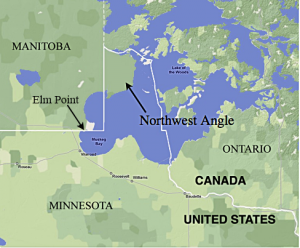 At its northern peak there is land but between that area and the rest of the state lies water. The Angle is thus effectively inaccessible by car except by way of Canada — visitors and 100-odd residents driving to and from the area have to present their passport, usually to a border official remotely connected via a digital terminal inside a small booth. The Northwest Angle started out as a complex cartographic error that was caused by confusion over the source of the Mississippi River.

The Angle is what political geographers call a practical exclave of the US. Broadly, an exclave is any part of a country detached from the main body of the nation. In this particular case, the “practical” modifier refers to the fact that the water between the disconnected areas is all part of Minnesota (so one could travel between them by boat).

Exclaves are fascinating but things get strange fast in the realm of enclaves. The distinctions and overlaps get complicated quickly, but in simple terms: enclaves are countries or parts of countries entirely contained within a single other country’s territory. So if there happened to be a Canadian city in Utah, for instance, it would be an enclave.

This may sound unusual but there are lots of enclaves around the world — in some cases, entire countries sit within other countries. The Republic of San Marino, for instance, is entirely enclaved within Italy.

And again, as we zoom in on some of these, they get increasingly weird, particularly in the realm of counter-enclaves (or: second-order enclaves).

In Europe, there are a number of Dutch enclaves that are situated inside Belgian enclaves that in turn reside in the Netherlands. This creates some fairly odd situations. At one time, for example, Dutch laws forced restaurants to close earlier, which was problematic for border-spanning establishments. The solution? Customers were asked to move to a table across between countries to continue their meal. The complexity of these borders trace back to all kinds of old medieval treaties and land swaps between lords and dukes. Some were later clarified by more modern agreements but other anomalies remain. 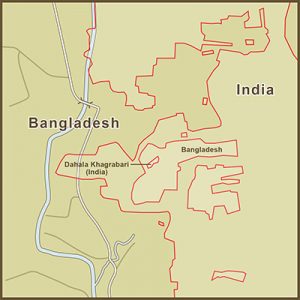 But none of these exclaves, enclaves or counter-enclaves holds a candle to Dahala Khagrabari, historically the most complexly nested enclave in the world. In a nutshell: picture a piece of India inside a piece of Bangladesh inside a piece of India inside of Bangladesh. It is the only known third-order enclave in history. The two-acre parcel at its center was owned by a Bangladeshi farmer who would wake up in Bangladesh and cross into India to farm his land. This record-setting enclave was eliminated in 2015, however, during a final simplifying cross-border land swap. 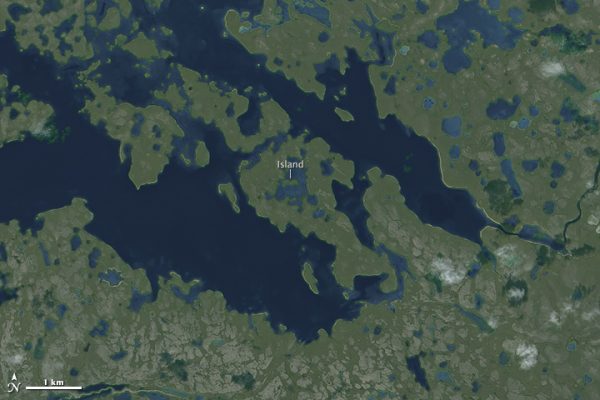 99% Invisible
One Man Is An Island

This otherwise-nameless isle in Canada’s Nunavut Territory measures about 1,000 feet across and sits in a small lake nestled within a longer island about 60 miles inland from the edge of Victoria Island. Needless to say, canoes and kayaks are your best bet of reaching this place — short of flying, portaging seems like the only way to go.

Previous Episode: The Architecture of Evil: Dystopian Megacorps in Speculative Fiction Films
Next Episode: Building the Wall: Highway Sound Barriers and the Evolution of Noise